How the Chiefs use Travis Kelce to make him unstoppable 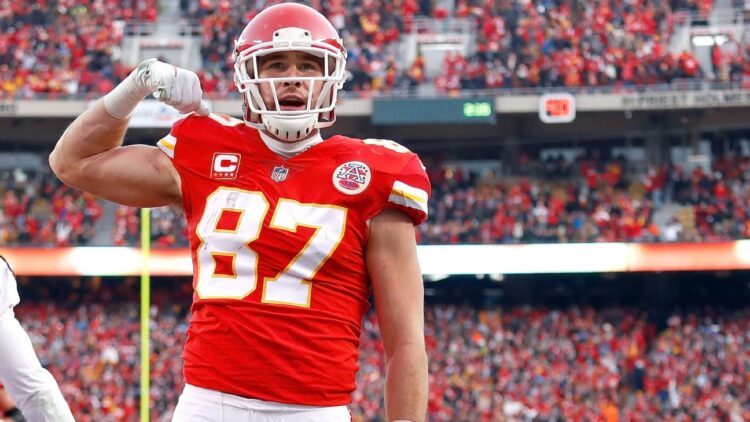 Travis Kelce and the Chiefs have been unstoppable this year and Kelce has only gotten better in the playoffs. Through their two games against the Browns and the Bills, Kelce has 25 targets, 21 catches, 227 yards, and 3 touchdowns. If you want to have a shot at slowing down this Travis Kelce and this Chiefs offense, you have to get Mahomes and Kansas City out of their comfort zone. That means taking away the easy plays to Travis Kelce.

To that end, there are a few plays and routes that the Chiefs like to have Kelce run. First, is the Cross or deep over route. The Chiefs like to run the Y-Cross concept which utilizes Kelce working across the field. The cross route ends between 18-22 yards downfield with the ball being caught between the hash and the numbers.

The Chiefs will run different route combinations for the rest of the receivers, but Kelce is the primary read on this play. There is always some form of clear out on the opposite side of the field to take away deep defenders that could help bracket or rob the route. There is also always someone in the flats to that same side to hold any underneath defenders. This creates a window between the linebackers in the middle of the field who are trying to carry the cross route and the flat defender down low.

The route is incredibly effective against a lot of coverages. Whether you have one safety or two, the concept and stress on the underneath and deep defenders remains the same. By occupying the flat defender, the Chiefs match Kelce up with a linebacker in coverage. The defense is generally going to have a tough time defending that.

To combat this route, some teams will have a jump call from the safety in a two-high look. Especially if Kelce is on the single-receiver side, this is a common tactic. If the Bills were running a jump call here, the corner would spin back to the deep half to replace the safety who would now jump the cross from Kelce. This gives the safety an angle on the route to break on the ball and impact the catch. The corner then falls back to protect deep with no receiver immediately threatening him on that side of the field. It looks like that’s exactly what the Bills are about to do, but at the last second Jordan Poyer pulls off the jump call to stay with the deep post by Mecole Hardman. That leaves Tremaine Edmunds to cover Kelce with the other linebacker pulled down into the flats by the swing route from Hill. Patrick Mahomes is able to fire the ball right between the numbers and the hash and it’s a pickup of 18 yards.

By now, most people have probably seen the Chiefs run their shovel option play to Kelce. If it’s not broke, don’t fix it though. The Chiefs keep running it and it keeps working. They use it almost exclusively in short yardage goal line situations. That makes it harder for linebackers to scrape across traffic and make a play before it’s too late. The Chiefs always run a rocket motion attached to it to pull linebackers and defenders out of position.

This play is reading is the defensive end. If he stays up-field and attacks Mahomes, Mahomes will pitch the ball underneath to Kelce. If the defender crashes inside to take away the shovel, Mahomes can run outside. The blocking scheme is power read. The guard pulls, the end man on the line of scrimmage is unblocked, and the motion pulls defenders away. To the play-side you have the running back running to the flats. That pulls the outside contain defender with him. That opens up a lane for Mahomes if the end read tells him to keep it. Here, though, the motion pulls three separate defenders, the end comes up-field to attack Mahomes, and that leaves a nice lane for Kelce to catch the shovel and get into the endzone behind his pulling guard.

Here is an example of the opposite read against the Browns. As a slight variation though, Mahomes is reading whether to hand off or pitch it – not keep it himself. You can see on this play that Miles Garrett crashes down inside to attack the shovel which leaves space outside. That forces Mahomes to give the ball to the running back to attack the perimeter.

If you’re a defense, this has to be the read you force the Chiefs into in this situation. The defense needs to be alert for Kelce in that H split, a short yardage goal line situation, and a pre-snap motion. Those are all huge tells. The end needs to crash on the shovel and the linebackers need to flow over to take the keep or give by Mahomes outside. You can’t let the Chiefs’ bread and butter goal line play work as intended when it has shown to be so effective.

Travis Kelce is also a force on the Chiefs’ Stick concept. The Stick concept utilizes someone in the flats, another receiver vertical, and then the stick route by the number three receiver inside, which is usually Travis Kelce. The quick hook outside pulls the flat defender and can keep the deep defender low. The vertical route takes away help over the top. It can also force the flat defender to carry him up-field before going to the flat. Then, the stick reads off of the flow of the defense. Here, Kelce sees at the snap of the ball that the defender outside of him is flowing away. He turns outside in that vacated area and Mahomes quickly hits him for an easy gain.

Now with three defenders covering the trips side, the read changes a little bit for Kelce. He knows that there’s now two defenders outside of him and they have the ability to cover the flats with the defender over the #2 receiver. As a result, the defender over the #3 receiver isn’t stressed to get outside. This can help create a pseudo-double team from that #3 defender and the middle linebacker.

Kelce sees that his outside is taken away so he runs his stick to the inside. The inside linebacker is late to drop to his spot to help the outside leverage of his #3 defender. Mahomes is able to fit the ball in for a completion and run after the catch. Playing trips like this as a defense with help inside-out is the most effective way for a team to give help on Kelce’s stick routes or those cross routes we saw earlier. You get a plus-one man advantage to his side which gives you a better chance at slowing him down. Whether that’s a gamble you want to take with Tyreek Hill also on the field is another question.

Travis Kelce demands the attention of the defense and if you don’t give it to him, he’s going to tear you apart. He might not have the huge game-breaking speed of Hill and some of the other Chiefs weapons, but he is used perfectly in Andy Reid’s scheme and understands where to sit in zones. He uses his body for leverage, attacks the ball in the air, and is physical after the catch. You can’t stop him, but you can reduce the damage he’s able to do by taking away the easy reads for Mahomes and the offense. Devin White and the Tampa Bay linebackers have quite the task ahead of them but if they can’t stop Travis Kelce, the Chiefs will cruise to a second consecutive Super Bowl.