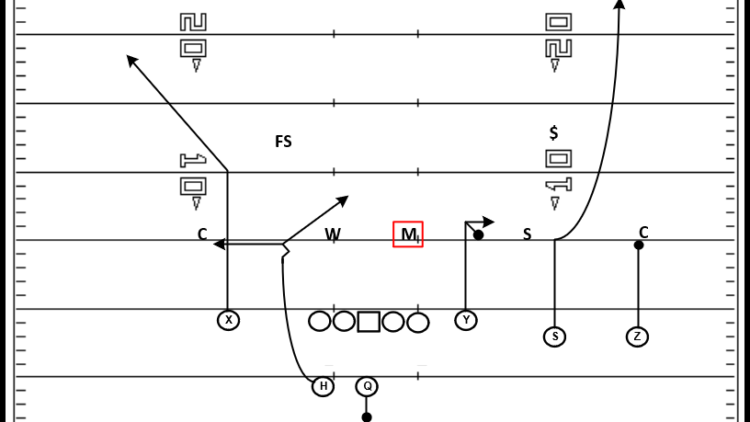 The Stick concept is incredibly popular across the NFL. Stick is a three receiver route concept that stretches the defense horizontally and gets the ball out of the quarterbacks hands quickly.

There are many variations on how to run the stick concept, but at its core, Stick has:

The Stick route itself is run at five yards. The receiver then has the option of sticking and staying in the vacated zone, or sticking and running away if it’s man coverage. This route must be quarterback friendly though with the angle of the route always working back towards the line of scrimmage.

The Stick concept widens flat defenders outside, removes vertical defenders, and leaves space in the hook flat area to be attacked. Teams get there differently, but as long as that combination is present, the concept works.

Stick reads the flat defender. Unless the quarterback is making a pre-snap decision to take a shot to the deep route, that’s where the progression starts.

After locating the flat defender, the next step is to assess the leverage of the Stick route. In it’s zone coverage, the stick will settle in the open space between the flat defender and the linebacker to the inside.

If it’s man, however, the Stick has to continue to work out and away from that defender that’s on his hip. When the flat defender widens to the flat or stays outside, the quarterback throws the stick.

If the flat defender attaches to the Stick, the flat route should be open with the vertical fade pulling away any deep defenders.

So if you’re the quarterback, you:

Generally, the vertical route is only thrown against man coverage. If you like the matchup, you can take it.

A lot of teams are shifting to running Stick with their #2 receiver working the fade as the vertical route. It gives more space for the ball to be thrown and removes the defender inside of the stick so that there’s more space to throw him open.

The backside of stick can vary widely from team-to-team. You can combine it with a two man concept to attack a different coverage than you’re expecting, run isolation routes, or keep guys in for protection. What’s most common, though, is an option route from the slot.

All that that player is doing, is reading the leverage of the defender. If he’s walling off outside, the option route breaks to the inside. If the defender has inside leverage, the option route runs outside. That inside break is great for attacking teams that are adjusting to the stick route. As the linebackers flow to the stick, that vacates the middle of the field. That isolates the slot on the other linebacker with no other support.

The Stick concept is incredibly popular throughout all levels of football. There are a number of different variations, but they all accomplish the same thing: stressing underneath defenders and getting the ball out of the quarterback’s hands quickly.