Anatomy of a Play: The Tennessee Titans’ division-clinching deep shot 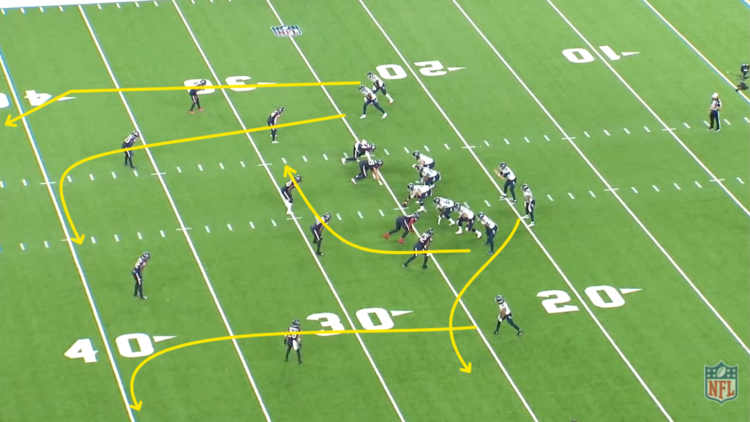 The Tennessee Titans have the ball with three timeouts and are tied 38-38 with the Houston Texans. It’s 1st and 10 at the Titans’ 25 yard line with 18 seconds left in the game. With a win, the Titans clinch the AFC South.

Given the need for a big chunk of yards to get into field position, the Tennessee Titans and Arthur Smith dial up a Post/Dig concept. The play attacks the match quarters coverage from the Texans.

The goal of this Post/Dig combination is to pull the safety down to the dig which leaves space to throw the post. They’re attacking the safety and putting them in conflict. It’s a great call for the specific coverage that the Texans are running.

The #1 receiver (outside receiver), AJ Brown, has a 15 yard skinny post. It is essential here that the receiver threatens the corner vertically by running full spead and widens his stem to the outside to create more space. By pushing his defender all the way to the bottom of the numbers, he has created more distance between himself and the safety. That gives a larger window for Tannehill to throw into.

The #2 receiver (slot) has an 18 yard dig route. It is critical that he runs this route at the correct depth based on the coverage of the Texans.

The Texans are running a match Cover 4 coverage. What that means, is that the coverage turns into man on vertical routes that enter their zone. It’s a way to incorporate man coverage into zone coverage principles. Generally, the rule is that if the receiver you’re over runs 12 yards or deeper, you automatically convert to man coverage on that receiver. If your receiver runs under five yards off the line of scrimmage, you pass that route off to the linebackers.

As a result, the dig by the #2 receiver from the Titans puts the Texans in a bad position. He’s running his route deep enough that it triggers the man coverage in the Texans defense. By running that route hard and getting to 18 yards as quickly as possible, he is forcing the safety to make a decision. The safety has to come down to cover the dig based on his coverage rules.

Because that safety is now in man coverage on the dig, he’s leaving the corner outside all alone. That corner is playing with outside leverage because he is expecting help inside. That gives Tannehill and Brown a lot of space to work with in the middle of the field with no safety help.

As a secondary layer, this concept stresses the safety because the linebackers are both pulled up on the five yard shallow drag route from the H-back. By running his route at that depth, he flashes in front of the linebackers and hold them low to open up a window to the dig. That in turn forces the safety to come down and help to cover it.

Tannehill likely pre-determined this throw just based on the situation. He started his throwing motion before that safety turned to break on the dig. He just happened to get lucky that AJ Brown widened his corner and the safety gave him a ton of space to throw to. The ball is completed at the 23 yard line of Houston. A couple plays later, the Tennessee Titans would kick the game-winning field goal and clinch the AFC South to set up a home matchup against the Baltimore Ravens.