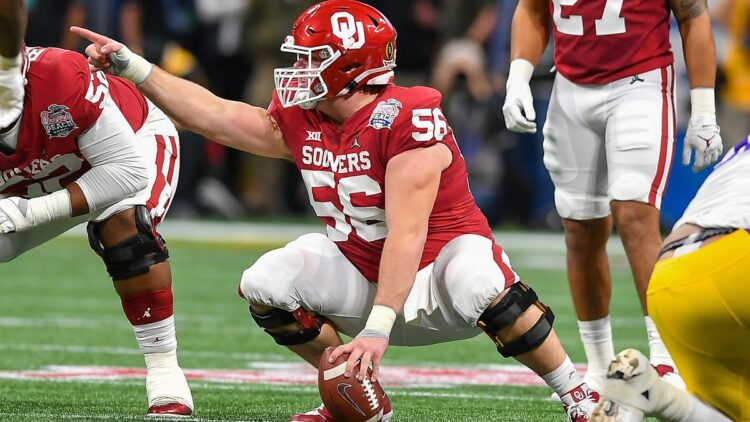 Creed Humphrey’s scouting report has him as a likely day two prospect. Just like Batman needs a Robin, every quarterback needs a center they can trust. Humphrey was a three-year starter for the Oklahoma Sooners and snapped to some of the best quarterbacks in college football. A rare left-handed center, Humphrey was a two-time All-Big 12 selection and the 2019 Big 12 offensive lineman of the year. The draft stock of centers isn’t very high, but their importance is underrated. I’d like to see Humphrey sneak into the first round, but it’s more likely that he’ll hear his name called on day two.

You’ll notice when Humphrey is able to square his body and get in front of a defender that he packs a strong punch. He’s able to sink his hips, get right under the defender, and place his hands right into their chest plate. It’s textbook technique and execution on Humphrey’s end. There’s no doubt that he’s a strong individual, but he looks absolutely dominant at times due to him being excellent at the little things.

Just as Humphrey is a solid technical pass blocker, he has that same skill as a run blocker. While not a great athlete (more on this later), he moves decent enough and has the leg drive to get the job done. He’s much better at blocking and driving on the move vertically than laterally.

Centers need to be the smartest players on the offensive line. They’re the ones that communicate to the rest of the linemen. Centers have to be able to read the defense as well as the quarterbacks do. Humphrey is a three-year starter and has a ton of experience.

Like I mentioned earlier, Humphrey doesn’t block well moving laterally. I’m not sure if it’s a lack of athleticism or awareness on the move, but too many times he missed blocks. I think because of this, it could make Humphrey a little more scheme specific. Getting reps in a wide zone scheme will change this, but, as of now, he’s better working in small spaces moving vertically.

Humphrey misses a lot of linebacker blitzes that he should have seen coming. Whether the linebacker was showing blitz or lining up in the A gap, he would try to kick out too quickly to his left or right and let the guy over the middle fly right by. Now, as I said earlier, the offensive line is all about communication and it could have been someone else screwing up.

Center is an under-appreciated position and Humphrey will become one of the best and most reliable in the league within his first few years. It’s tough to determine which team will be the best fit for him, but he should slot in as a day two pick.