Why did the Ohio State offense only score 24 points against Alabama?

What happened to the usually explosive Ohio State offense and Justin Fields in the National Championship Game? 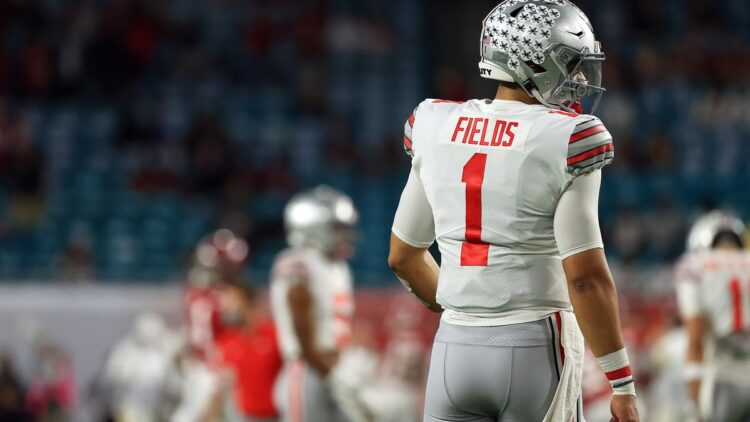 On January 11th, Ohio State was destroyed by Alabama in the National Championship game. The Buckeyes were able to stick with ‘Bama for about a quarter and a half. However, Justin Fields, coming off a magnificent 385 yard and six touchdown performance against Clemson, put up a much less impressive 17/33 for 194 yards and one touchdown. I have broken down the film to look into exactly why Fields and the Ohio State offense could not match the firepower of Mac Jones and Co.

We’ll start with 6:50 to go in the 1st quarter, the Ohio State offense is facing 1st & 10 from their own 36. This play is an example of factors that are consistent throughout the game.

First, let’s take a look at ‘Bama’s coverage. Throughout the night the Tide play a base cover two with man and zone elements underneath depending on the situation. The two safeties deep forced Fields to try to make throws into tight windows throughout the night.

The Tide consistently got pressure when only rushing four linemen. That is not great math for the Buckeyes. Rushing four means that you can cover every single eligible receiver in man plus the two safeties can roam wherever they please. On this play in particular, play-caller and head coach Ryan Day does a good job getting their star receiver Chris Olave down the middle of what would appear to be two safeties pre-snap. However, Jordan Battle, #9, comes in to squeeze the tight end near the sticks. This leaves Olave one-on-one between the hashes. Fields, with a combination of feeling pressure and not seeing Olave streaking, makes an errant throw to the drag route over the middle. You cannot miss those opportunities when playing a team as good as Alabama.

Here on 2nd and 10, Ohio State does a great job recognizing that Alabama is continuing to sit in Cover 2. Fields makes an NFL caliber throw over the middle on the bender route. Unfortunately, the Ohio State offense didn’t continue to attack the middle soft spot of Cover 2 throughout the game.

Another rough play call against that Cover 2 shell that ‘Bama runs. Football is a simple math game sometimes, and three verts against four defenders is not great math. Shoutout to Fields for still making a play, but he really doesn’t have a great chance in the passing game here.

Many times throughout the game it is simply not Fields’ fault. This passing concept gives him no chance to make a play. The receiver at the top is running a no effort hitch, the #2 (slot) and the tight end run into each other, Olave is double teamed by the corner and the safety at the bottom of your screen and the wheel route by Teague is picked up with ease. Nothing comes open, and with the pressure by the ends, Fields has no choice but to throw it out of bounds.

This is a very sheepish call. I like the tight bunch formation, but the spacing/trail concept here is so boring. In a game where the receivers have had trouble creating separation from this excellent defense, making everyone try to win one-on-one and find space is weird. Bama also does a fantastic job carrying these receivers through their routes. Especially on a 3rd and goal to tie the game. I would have liked to see a rub route, where it would cause some confusion with the defenders, or a rollout so that Fields would have a chance to use his legs if needed.

I would’ve liked to be inside the mind of the play-caller on this one. It’s 3rd and 14, you’re playing the best team in the country, you need points badly, and your quarterback threw six touchdowns last week. Instead OSU just bows down. I wish he would’ve given his guys a chance.

Ohio State tries to combat the constant pressure by bringing 11 personnel (one running back, one tight end) to stay in and block. However, with the linebacker and safety blitzing, the Buckeyes become overwhelmed. Watch the running back trying to block. Yikes. At least Fields is able to once again throw it away.

I love that Ohio State tries to stress the right side of the defense with the bunch formation. This play is a disaster, though. Both receivers run corner routes, an obvious miscommunication. The drag route and the backside go are both well covered. That leaves Fields with a guy in his face while he is attempting to make a dump down throw. The delayed blitz from the backer (purple arrow) is great. He is allowed to be patient, find the gap in the line, and attack the quarterback. Fields at this point has taken some big hits and is not getting much help.

When a quarterback is constantly being hit, they’ll often start falling away in the face of pressure. Here, Fields can step up or step into his throw, but he does not. That causes the ball to go left and short. Although this was called pass interference, a better, more driven ball is a touchdown here.

Ohio State now uses a nine-man protection for this play. That isolates the receiver at the bottom of the screen. The receiver does a great job bringing the corner inside and making an outbreaking cut, but Fields just.. misses. Once again, you can’t miss easy opportunities like this against such a great team. I like the play call and giving your QB protection, but the throw must be made.

Before the ball is even snapped on this 3rd and 10, there is confusion on the defense. We see a ‘Bama defender trying to sprint to avoid 12 men on the field. The Buckeyes run a pretty basic four vertical concept with the back coming underneath on a drag. I think that Fields is still trying to get the ball out of his hands quickly because of the constant stress that Alabama’s defensive line is causing. However, Fields not only has a first down option here, but a touchdown as well. The tight end at the bottom of the trips is available for a hole shot or bullet pass right near the first down marker. At the top of the screen, there is a complete busted coverage. Every other player except for the top corner takes their matchup in man, but the top defender passes him off like he has help behind him. That leaves the vertical route completely uncovered for an easy touchdown.

It’s hard to understand why more of these types of play calls were not used throughout the game. I like that they get Fields on the run, where he can control the play and get away from pressure. This is a pretty basic play-action sprint out, with a comeback and two overs. Fields excels with easy reads, as well as when he is on the run. If they played this game over again I’m sure there would be more of these calls from Ryan Day.

Overall, Ohio State just couldn’t match what Alabama did on offense for a variety of factors. There was the pressure and tight coverage from Alabama, the rough playcalling, and some definite mistakes by Fields. The Buckeyes were outplayed by one of the better college teams we’ve seen in the last ten years.