Why the Kansas City Chiefs defense is a problem for quarterbacks 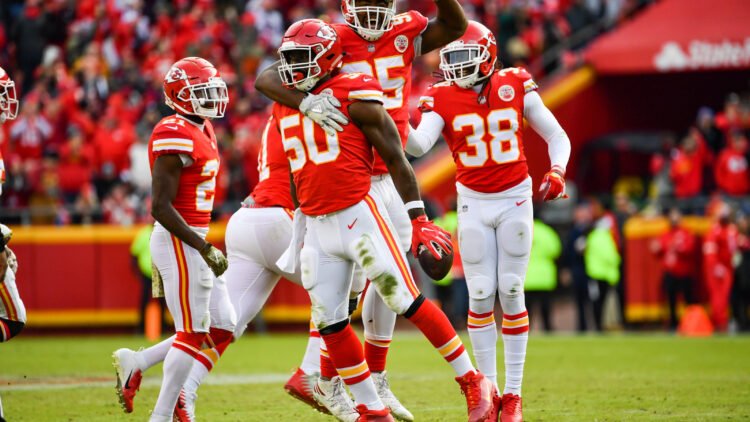 KANSAS CITY, MO – NOVEMBER 11: Justin Houston #50 of the Kansas City Chiefs celebrates with teammates after an interception in the second half of the game against the Arizona Cardinals at Arrowhead Stadium on November 11, 2018 in Kansas City, Missouri. (Photo by Peter Aiken/Getty Images)

The Kansas City Chiefs defense is playing almost as good as their offense is in the playoffs so far. They’ve given up just 215 passing yards per game, a 40% 3rd down conversion rate, and 13.7 points per game. While the task will be much different against Tampa Bay and Tom Brady, the Kansas City Chiefs defense have used a lot of rotation in their secondary to cause confusion and bait quarterbacks into making mistakes or holding onto the ball. They’ve also been incredibly aggressive in their blitz packages in the red zone. While Brady isn’t as inexperienced as Baker Mayfield or Josh Allen, he has had trouble with locating safeties this year. Because of that, the Chiefs disguises could play a part in the Super Bowl.

The Chiefs defense loves to disguise and rotate into an unconventional Tampa 2 coverage. Tampa 2 coverage is the exact same as Cover 2. The difference is that the linebacker, who is normally covering the short middle or vertical seam area, now drops deeper and takes the deep middle. That turns the coverage almost into a Cover 3 look. There are three deep defenders and four underneath defenders. That stresses the outside linebackers and forces them to be able to cover that vacated short middle of the field. However, it provides support on seams and posts run from the tight end or slot positions on offense. It’s a way to essentially double that player and provide support to the safeties.

Instead of the linebacker being the pole runner and deep middle defender, the Chiefs insert Tyrann Mathieu into that role from the depth of the safety position. This puts Mathieu, a dynamic defender, into a robber role. There, he can roam and impact the middle of the field by attacking crossing routes and posts. He’s athletic enough to carry any receivers and aggressive enough to make tackles and deliver hits. While Mathieu rotates down to the deep middle hole, Sorensen, who is roaming at the linebacker position, bails deep to replace Mathieu in the deep half. So, the Chiefs get to that same Tampa 2 look, but in a different way.

Kansas City will also show a one-high safety look to get to the same concept. The deep safety bumps over, Mathieu rotates over to the middle and looks to locate any crossing route or post, and Daniel Sorensen, who is up at the line of scrimmage, bails back to the deep half. In a third and long situation, which is when Kansas City calls this coverage a lot, it forces the offense to check the ball down.

You can see that Allen checks to his right and sees Sorensen bail to his deep half. Recognizing that and knowing the normal soft spot of Cover 2, he looks to the middle of the field for the post to Cole Beasley. However, Mathieu has now occupied that window. By now, there’s pressure, and Beasley has to snap off his route and make is way back to Allen to provide an area to throw to. He catches the ball but is short of the 1st down.

Whenever you’re rotating guys in the secondary and moving pieces around post-snap, you can have issues with players losing their landmarks and being unable to cover ground quick enough to cover their designated area. This happened on the drive against the Browns at the end of the half that resulted in a touchback.

The Chiefs rotate to their Tampa 2 look and Sorensen is bailing to his deep half. Just like Josh Allen did, Baker Mayfield sees a two high look and wants to attack the middle of the field. Baker looks immediately for the seam to his tight end David Njoku. However, I think unintentionally, by looking for the seam and seeing that it’s covered, his eyes pull Sorensen into the middle of the field. In his rush to turn his eyes and locate the quarterback, Sorensen loses track of the receiver to the bottom of the screen. The corner carries him but lets him go as he sees Kareem Hunt in the flats. With Sorensen pulled to the middle of the field, that leaves space on the hole shot to the fade. That’s the risk you can run by rotating guys late in the play.

The Chiefs defense doesn’t always rotate to that specific Tampa 2 look. Just because a quarterback diagnoses that there is a rotate going on, that doesn’t mean they know what the resulting coverage will be. Kansas City rotates into a bunch of different coverages to force quarterbacks to diagnose things post-snap.

While the Chiefs run a lot of those coverage rotations, they aren’t afraid to blitz either. Especially in the red zone. They used a ton of zero blitzes against the Browns and the Bills these playoffs. Kansas City wants to make quarterbacks make quick decisions in this area of the field. There’s less risk of being beat deep and they have the back of the endzone to help their secondary out. More often than not, it works.

A zero blitz means there are no safeties and you’re blitzing every defender you have except for the guys that are in man coverage on receivers. There’s zero help so if you get beat, it’s over. Part of the blitz design though is that you’re also always bringing one more guy than the offense can block. That forces the quarterback to get the ball out of their hands quickly. Despite Chris Jones giving his best Albert Haynesworth impression on this play, the blitz from the Chiefs works exactly how they wanted. The Chiefs have seven rushers against the Bills six blockers. The pressure forces Josh Allen to bail backwards and make a low percentage and inaccurate throw downfield.

Good quarterbacks can attack zero and make you pay. Your receivers still have to separate though and if you throw underneath, they’re going to have to break a tackle with a defender trailing them in man coverage.

While they might not always run zero blitzes, Kansas City isn’t scared to blitz at any spot on the field. On these blitzes, they will leave one high safety with man coverage underneath. That usually means bringing six pass rushers and forcing one-on-one matchups across of the offensive line.

The Kansas City Chiefs defense and Steve Spagnuolo are all about forcing the quarterback into diagnosing coverages post-snap or making quick decisions. He takes risks, but they’re calculated and in specific situations. His rotates can force quarterbacks to make mistakes, throw into coverage, or hold the ball and allow the pressure to get home. His blitzes force quarterbacks into quick decisions in the most critical area of the field. He might get burned, or he might burn you, but one of these plays could determine the result of the Super Bowl.