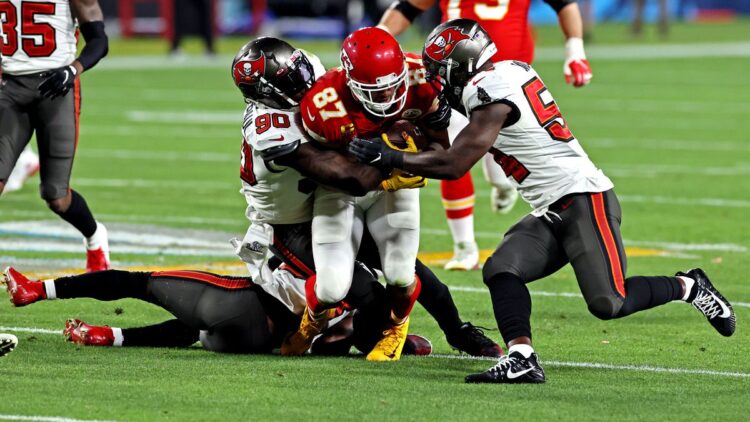 The answer may seem obvious for why the Tampa Bay Buccaneers dominated the Chiefs in Super Bowl LV. Their reason for their win was more than just simply getting pressure, though. There were a couple schematic adjustments that allowed Tampa to go from just winning a Super Bowl to blowing out a team people thought was almost unbeatable.

While the Bucs defense largely won on disciplined play in the secondary and getting pressure with their front four, Tampa did bring five or more rushers on six pass plays during the game. On those pressure looks, the Chiefs went 0/6 passing with an interception. The only positive play was a five yard defensive holding penalty. Despite only blitzing six times, the Bucs got pressure in 2.5 seconds or less on 43% of Mahomes’ drop backs. Those pressure looks, while infrequent, came at the perfect times.

Twice, the Buccaneers brought a five-man pressure with a blitz from the corner. Tampa’s plan was to create as much confusion for Kansas City’s beat-up offensive line as possible. They would frequently walk up their linebackers into uncovered gaps. That forced the line to communicate and prepare for blitzes that eventually either never came or came from somewhere else.

That’s where these corner blitzes come in. The end man on the line of scrimmage spikes inside to pull the offensive tackle in and create a free running lane for the corner. That then rushes Mahomes to make a quick decision and get to his hot reads. However, both Mahomes and his receiver didn’t read these blitzes well.

Normally on corner blitzes like this, the receiver will immediately turn around because there’s nobody on them. By going up-field though, the receiver runs into the coverage of the defense. Tampa needs to replace where that corner has vacated so there will always be somebody coming to fill that area. You just have to beat them there and take the easy yards.

A common way for defenses to cover for their blitzes from corners is by capping their deep defenders. That means that the deep defender will be over the blitzing corner. That puts them in position to cover that receiver without having to move much post-snap. It’s a common tell and Mahomes doesn’t diagnose that here. Both the outside and slot corner are capped by the safeties. After the snap, those safeties come down to cover the receivers. However, at the top of the screen, Kelce runs up-field towards the closing safety and Mahomes doesn’t attack that vacated space.

On another corner blitz look here, the Bucs do a good job quickly getting to their slot blitz off the motion from the Chiefs. This is a relatively common adjustment for teams. They send pressure backside away from the motion because that’s now a defender that’s free of responsibility in coverage. It chases down and closes any cutback if they give on the jet sweep or handoff underneath. However, Mahomes once again doesn’t look to diagnose that blitz. It leaves Tyreek Hill with about 10 yards of cushion which is great for a run after catch opportunity. Instead, Mahomes reads the top of the field and throws into the flat-footed corner that’s waiting to jump the wheel by the jet motion.

Aggressive in the Flats

Throughout the playoffs, teams attacked the flats outside when the Buccaneers played off coverage. Washington did it and had success, the Packers did it and had success, and then the Chiefs attempted this access throw two times early in the first quarter before completely abandoning it. That was in part due to a nice adjustment from Tampa Bay.

An access throw is a pre-snap read for the quarterback. It’s a free route to take if the defense is giving you cushion. This five yard hook is perfect for the speed that Kansas City has. Teams are afraid to walk up and play man because of that speed, so they give cushion. However, the Chiefs didn’t attack that cushion consistently.

The Chiefs tried to do the same exact thing the very next play, but this time, Tampa played flat footed at the corner position. The Buccaneers created pressure with their front four which allowed them to go to two high safeties. That in turn, allowed the Tampa corners to play more aggressively and heavy footed. They weren’t scared of getting beat over the top because they had help and they were getting pressure. So, there’s less time for Mahomes to attack deep. That let them squat on these quick access throws and take away the free yards for the Chiefs. Mahomes wants to throw the quick hitch outside on this access throw off of a run play, but realizes that it’s covered and has to throw it away.

While the Tampa Bay defense was able to dial up the blitz at the right time as well as adjust to the ways Kansas City was attacking them, they also threw a couple exotic three-safety looks at the Chiefs. It’s a look that you very rarely see at the NFL level. A couple of times, they also paired that with their five-man pressures. That only compounded the issues for Mahomes. There’s now an incredible pass rush combined with a coverage rotation and shift that he’s likely never seen before.

On the first time the Buccaneers showed this look, they dropped two of their safeties down and rotated one back to get to Cover 3. #24 Carlton Davis gets pulled up and there’s an opportunity behind him if Hardman stays skinny on the corner. Mahomes eventually reads this but the pressure closes in and he overthrows the ball.

Later in the second half the Bucs again pair their three-safety look with a five-man pressure and it forces Mahomes into an interception. They again rotate to Cover 3 and Mahomes wants to attack the middle of the field. By the time he diagnoses where the hole in coverage is, the blitz is getting home and he has to throw the ball on a deep shot to Tyreek Hill. The ball gets tipped and intercepted.

While the major storylines of the game were of Brady, his 7th Super Bowl win, and the insane pressure that the Bucs got on Mahomes, there were some really nice scheme adjustments by Tampa Bay to enable those things to happen. They got Kansas City out of their game and Tampa played by far their most complete game of the year. Congratulations to the Tampa Bay Buccaneers. You are Super Bowl champions. Fire the cannons.