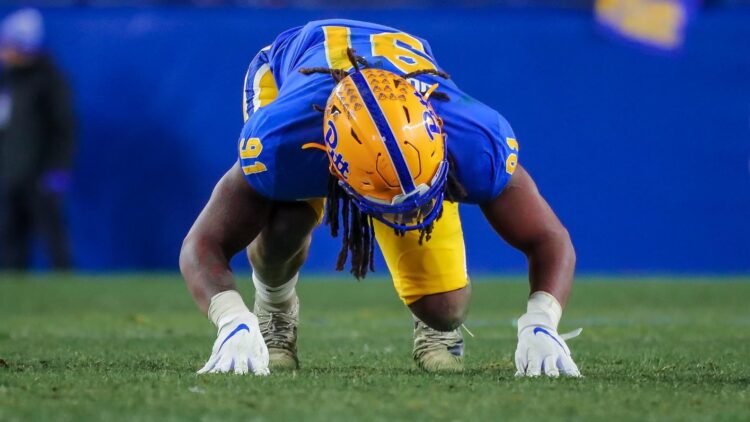 Which player has the most sacks in college football the past two years? That’s right, it’s Pittsburgh defensive end Patrick Jones II. While Pittsburgh did not have the success on the field they anticipated, their defensive line was one of the best in the nation. In 2019, Jones proved he could play. This year, he proved he’s worthy of an early draft pick. He’s an underrated prospect, but there’s no reason he can’t become a solid pro for years to come.

When you rack up 17.5 sacks in two seasons, you have some serious skill as a pass rusher. Jones displays a variety of moves that he uses to destroy offensive linemen. He was part of a very deep Pittsburgh defensive line that will see three guys drafted this Spring. If he was going up against an offensive tackle one-on-one, more often than not he was getting to the quarterback. Offenses must have a game plan to contain Jones when he’s coming off the edge.

I don’t know how fast his 40 time will be, but the short-area speed that Jones shows on the field is elite for a 260+ pound man. After he disengages from blocks, he sprints to the ball and often makes a play. You’ll notice this most when the quarterback escapes the pocket or when a running back tries to bounce it outside. That second gear is what pushes him up the board as a top 60 prospect.

Every defensive end’s job is to set the edge in the run game and to do that you have to be able to control the tackle. Jones does this incredibly well and shows great technique disengaging from blockers. This mostly comes from his high IQ and being able to read where the runner is going.

At the Senior Bowl, Jones’s arms measured at 32 inches, which is slightly below the desired 34 inches for an edge player. I’m not a guy who’ll knock someone based on measurements alone, but you’ll see on film that Jones’s length does work against him at times. Whenever he attempted to extend his arms and push without getting into the chest of the offensive linemen, he would easily get knocked back. That means it’ll be tough for him to beat disciplined tackles with longer arms and good footwork. This alone could drop him into day two of the draft despite some of his athletic attributes.

I don’t see him playing anywhere besides a 4-3 defensive end, which limits him within a defense. He almost always had his hand in the dirt coming off of the edge and never dropped into coverage. I think he’s best lining up as a 5 or 9 technique and used as a pass-rush specialist.

On a Pittsburgh defensive line that’ll contain three future pros, I think Jones will be the best. This might be a bit of a spicy take considering that his old teammate Jaylen Twyman had 10.5 sacks in his lone season as a starter in 2019. Teams are always in need of players who can get to the quarterback and that’s a role Jones can fill. He impressed at the Senior Bowl, which helped his stock and will get him drafted on day two of the NFL draft.