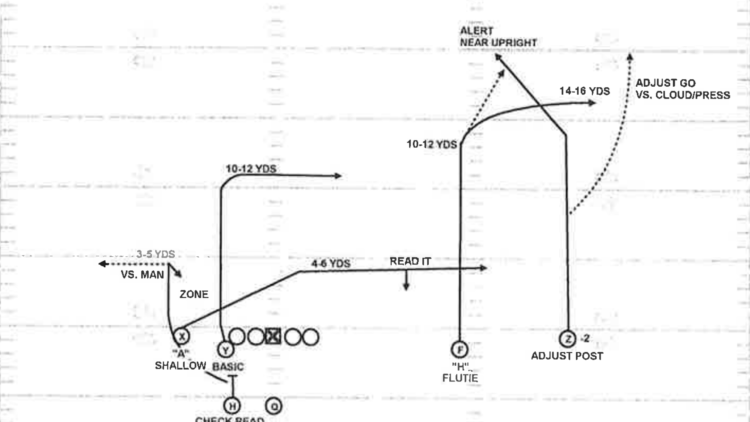 The Drive Concept is a high-low scheme that attacks linebackers in the middle of the field. It has become relatively popular throughout the NFL and NCAA after its origins with Bill Walsh.

Drive attacks linebackers that struggle in coverage by forcing them to make a decision and either chase receivers across the field or drop underneath routes behind them. The two-man route concept utilizes the speed of the offense horizontally instead of vertically. The two routes that make up the Drive concept are:

With those two routes, the concept attacks the underneath defenders. Whatever that defender does, the quarterback throws off of their movement. The play is typically designed for the shallow drag coming across the field. That route either needs to run away from the chasing man defender or pull linebackers up to cover it. The basic behind it exploits the hole in zone coverage if defenders chase the shallow.

The other routes attached with the Drive concept can vary. Usually, there is a vertical shot or a route coming in behind the drag. The running back can also be a crucial component and work to vacate play-side space with flares or quick releases to the flats.

Drive can work against both man coverage and zone. It utilizes both the speed of it’s offensive players and stretches the zones of the defense.

Against zone, the offense is reading the hook defender. If he comes down on the shallow drag, the quarterback will throw the basic behind him. If he gets depth under the basic, the shallow will be open underneath.

The Saints use the Drive concept here to attack the middle linebackers of the Raiders. As the shallow drag from the #1 receiver flashes in front of them, they stay low and transfer that route off to each other. That leaves space in the middle of the field for the basic behind it.

Against man coverage, the shallow is probably going to run open away from the chasing defenders. The basic inside of it pushes the defender vertically and creates that space underneath in the middle of the field.

If you’re the quarterback, your process is:

One way to attack off of the Drive concept is to run a route behind the shallow. The Panthers here choose to run a quick slant to accomplish that. The shallow drag pulls defenders with it because it is streaking across the field, the basic route holds defenders in the middle, and that creates a one-on-one situation with the remaining receiver outside. As the defense flows with the shallow, that leaves space behind it to throw the slant.

The Drive concept gets offensive playmakers on the move underneath and forces linebackers to cover a lot of space. It’s effective against both man and zone coverages, and has cemented itself in playbooks at all levels of football.