Carson Wentz to the Indianapolis Colts: Can He Succeed? 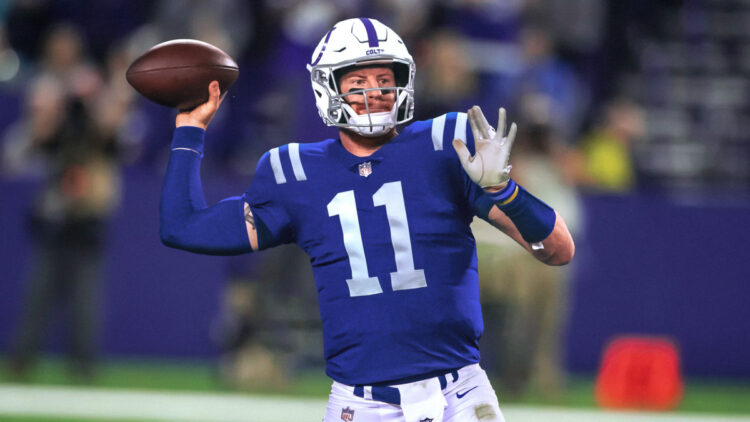 Wentz is coming off his worst season in the NFL though. His 2020 campaign was one of the biggest drop statistical dropoffs by a quarterback in recent memory. He suffered career highs in interceptions (15), sacks (50), and had a career low in completion percentage (57.4%). Out of 31 qualified quarterbacks, he was 29th or 30th in completion percentage, quarterback rating, and pass yards per attempt. In 2020, he was flat out one of the worst quarterbacks in the league. The Colts are hoping they have found their QB1 of the future, but his recent play is cause for concern. Will Carson Wentz succeed in his new role with the Colts? The answer, is yes. He has all the tools to reproduce his 2017 magic.

Read More: What in the World is Going on With Carson Wentz and the Eagles?

The Wentz criticism was warranted, but the fault was not all of his own. He played behind an offensive line that battled injuries and struggled to find consistency throughout the season. The Eagles offensive line was forced to have 14 different starting rotations. According to Pro Football Focus, this makeshift offense line ranked at 19th overall after allowing four sacks a game and a league high 65 sacks on the season.

Although 19th is close to average in the NFL, it was not enough to change the team’s below average performance. Comparatively, in 2017, Wentz best year, the Eagles offensive line was the best in the NFL according to PFF. That year, he had a career high in touchdowns (33) and quarterback rating (78.5) before injury. The offensive line that won the Super Bowl in 2017 has declined through 2020, which can be a directly tied to Wentz’ gradual decline.

One of the biggest reasons why Carson Wentz will succeed is the Colts’ offensive line. They ranked 7th overall, but were 2nd in the league in sacks per game at 1.2. This was done with Philip Rivers at the helm who is not mobile enough to evade oncoming rushers. The Colts do have to find a new left tackle since Anthony Castonzo retired, but the rest of the line is still intact. The Colts do have options though, as they can either draft a tackle or use free agency with $65 million in cap space. This is all great news for Wentz as his organization has the assets to invest in his protection. Wentz’ returning to a top 10 line, is the first step in him returning to his elite play.

The Eagles lack of firepower on the outside hurt them all season as they struggled to produce points. You can argue that their lack of playmakers is the most significant reason for Wentz’ terrible play. The receiving core caught the injury bug and were without Alshon Jeffrey and DeSean Jackson to start the season. They hoped first round draft pick Jalen Reagor would be the spark to the offense, but he was unproductive. This forced Wentz to rely on undrafted receivers from the practice squad. Greg Ward Jr. had flashes of ability, but was not able to stay consistent. As a whole, the Eagles ranked in the bottom half of the league with 20 dropped passes. They also ranked 29th in the NFL in yards after catch.

The Colts on the other hand, boast playmakers in almost every position offensively. When healthy, T.Y. Hilton has proven that he is one of the league’s best deep threats. Although Hilton is a free agent, the Colts have the cap room to re-sign him or target another deep tthreat such as Will Fuller. Zach Pascal and Michael Pittman Jr. were also reliable options when Hilton was unavailable. This group was 5th in the league in yards after catch and top 15 in balls dropped at 14.

The most important key that will help Carson Wentz succeed is the new system that he is in. In his best statistical year in 2017, Frank Reich was his offensive coordinator. He is now reunited with Coach Reich who can put him in a position to succeed. He has a coach that creates schemes and play calls that maximize his strengths. Ultimately, Wentz will not have to be the hero and make a spectacular play for his team to win. He can use quick throws and short routes that allow his playmakers to get out in space.

Indianapolis can also prioritize running the ball. They will potentially have a trio of backs with Jonathan Taylor, Nyheim Hines, and Marlon Mack if Mack chooses to re-sign. That running attack averaged four yards a carry and would take a tremendous load off the shoulders of Wentz. It not only gives the offense a balanced attack, but it can be used to get Carson in rhythm with play-action.

This is not an excuse for Wentz’ mediocre season. He definitely has improvements he needs to make. Especially in his decision making and throwing mechanics. However, he still possesses elite talent. Wentz will be highly motivated to prove his doubters wrong, but fixing his own issues is the most important. If he can do that, he has a team that is primed for a Super Bowl run.