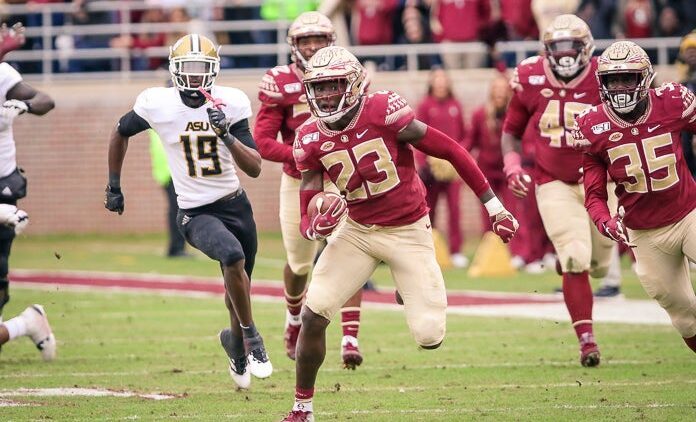 If you were to create a football player in a laboratory, they would probably look something like Florida State safety Hamsah Nasirildeen. He came to Tallahassee as a top-rated recruit and became a multi-year starter during a transition period for the program. He did suffer a significant knee injury that cost him most of the 2020 season, but he’s the prototype for a defender in today’s game. Assuming he’s fully healthy, Nasirildeen’s ceiling is extremely high.

Nasirildeen plays a lot like a traditional strong safety. He’ll play in the box and come up with big hits. At this point in his career, he’s much better against the run than he is against the pass. This is quite evident when you see him run sideline-to-sideline tracking down ball carriers. He plays fast and with proper tackling technique that results in very few missed tackles. Since he’s so good in the box, we should expect to see him play some linebacker in nickel and dime packages as more and more teams favor hybrid players in the secondary.

Nasirildeen is built like a linebacker, but moves like a corner. He stands at 6’4″, 220 pounds which allows him to line up in a variety of positions. At his size and with what he’s displayed on film, he will be a valuable chess piece for any defensive coordinator.

Simply put, Nasirildeen makes things happen. He forced seven turnovers in college, despite only playing two full seasons. His ability to come up with big hits forces the ball out and his athleticism as a safety resulted in four collegiate interceptions. My belief is that players who can force turnovers in college can make the same thing happen in the NFL. It might take a bit for Nasirildeen to find his footing as a pro, but the wait could be well rewarded.

Nasirildeen sustained an ACL tear at the end of the 2019 season and only played in two games in 2020. Not every player can be superhuman and return from an ACL tear in 6-8 months so him missing the season isn’t a big deal to me. However, when he returned for those two games and played in in the Senior Bowl, he still didn’t look fully healthy. His pre-draft medicals will be huge, but in this unusual process, teams may not get a clear answer on that knee.

While Nasirildeen might flourish as a positionless defender, he lacks some refinement that might affect his ability to play right away. There were times where he took the wrong angles or overran a play. Then, in pass coverage, he’d rely too much on athleticism and get beat on routes he should be on top of.

Nasirildeen’s feels like a guy that could be very boom or bust. He’s a physical specimen in the mold of Kam Chancellor, but also has a lot of similarities to busts like Taylor Mays. Nasirildeen does have the advantage of playing in an era that suits his play style. Defenses now utilize more positionless players and focus on getting the best eleven on the field. I expect him to be a third or fourth-round pick.