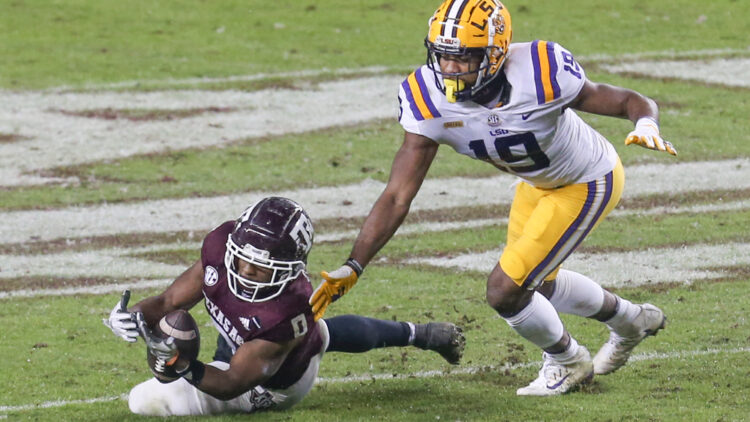 A three-time FCS champion at North Dakota State, linebacker Jabril Cox was ready to move up to the SEC by playing for the 2019 champion LSU Tigers. While North Dakota State is an incredible FCS program and better than many FBS schools, the jump to the best conference in college football is tough for any player. Despite LSU failing to meet expectations, specifically on the defensive side, Cox held his own.

This is where Cox is going to make his money. Coming from North Dakota State to the SEC, I questioned how the speed of the game would affect him. However, he showed excellent coverage abilities and didn’t seem overwhelmed going against the best athletes in college football. He seemed to do slightly better in zone compared to man, but displayed the ability to do both. Cox was unafraid to line up in the slot and defend receivers and tight ends. As a rookie, you could keep him in on passing downs and expect him to hold his own.

While I question some of Cox’s skill as a run defender (more on this later), you can’t dispute the fact that he is elite playing in space. He is at his best when he can use his speed and get downhill. That makes him a great fit as a a weakside linebacker in the NFL.

From a mental aspect, Cox understands the game as well as any college linebacker. He’s not easily fooled by misdirection or play-action plays and knows how to read routes in zone coverage. Cox does a good job of following the quarterback’s eyes and anticipating where receivers are going so he can get the upper hand on them. Learning a new playbook won’t be too hard for him, so don’t expect him to face a steep learning curve.

Cox isn’t going to be a thumper at linebacker. He never showed the ability to get off of blockers quick enough and would also miss far too many tackles. As a result, it limits where you can line him up in base packages. I would expect offenses to attack him early in his career by running right at him. This might be the case for a while until he can consistently prove he can be more physical. However, it is beneficial for Cox that the NFL is a passing league. Problems in the run game might not be as big of an issue as it would have been a decade ago.

This is more of something I didn’t see him do rather than something he can’t do. Cox was rarely used as a blitzer. It makes sense since he’s so good in coverage, however, if offenses know that he’s not a threat to blitz then they can scheme around that. He’ll need to show some pass rushing skill in order to become an all-around linebacker.

Like many other linebackers in this class, Cox is an excellent coverage guy who could be on the field for all three downs. As a result, Cox should be selected relatively early. I don’t think we’ll see Cox picked in the first round, but he’s almost a slam dunk to be a day two selection. He still has some work to do as a player, but I don’t see any reason for him not to be a multi-year starter.