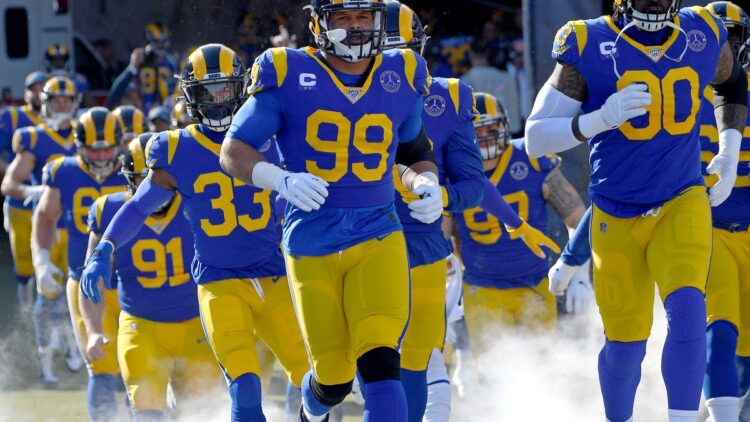 After trading away their 2022 and 2023 1st round draft picks for Lions’ quarterback Matthew Stafford, the Los Angeles Rams have set themselves up to go seven seasons without a first-round pick. Since 2016, the Rams have traded those first-round picks for Jalen Ramsey, Brandin Cooks, and now Matthew Stafford. While unorthodox, Sean McVay and general manager Les Snead have not only made the playoffs four years in a row, but also made a Super Bowl appearance. After a season in which Los Angeles fielded the top ranked defense and won a playoff game, the Rams will look to use their limited resources to make another run at the title.

Over the Cap & Not Much to Draft

Entering the 2021 offseason, the Rams are one of the most complete teams in the NFC West. Aaron Donald and Jalen Ramsey lead the league’s best defense and newly acquired Matthew Stafford will look to elevate the offense in ways that Jared Goff simply could not. Unfortunately, these high-profile players have left the Rams $22 million over the salary cap and with their first pick in the draft at 57th overall. While they will likely receive two 3rd round compensatory picks, LA will have little to work with in terms of adding impactful talent to a championship caliber roster.

It can be argued that the heart of LA’s stellar defense last season was its secondary. While Jalen Ramsey is the leader of this unit, three upcoming free agents were just as important. Safety John Johnson III and cornerbacks Troy Hill and Darious Williams were all integral in allowing an impressive 190 passing yards per game and helped produce 14 interceptions.

Johnson was one of the first draft choices during McVay’s tenure as head coach. At 25 years old, this four-year veteran is a proven contributor and is coming off a season in which he played all 16 games, surrendered zero touchdowns, and only allowed 6.5 yards per completion. With Ramsey covering the elite receivers in the division such as DeAndre Hopkins and DK Metcalf, Johnson provides insurance as the last line of defense at the safety position.

Having combined for seven interceptions and 104 tackles, the duo of Hill and Williams played outstanding during the 2020 season. In fact, Williams even received a higher player grade than Ramsey by the end of the season. Williams received 2nd Team All-Pro honors and Hill played 972 regular season snaps and another 134 in the Ram’s two playoff games. This duo may not carry the star power of some other defensive mainstays on the roster, but are critical to everything Los Angeles does in the secondary. They will both be difficult to replace if they leave in free agency.

Not only will the secondary be facing key free agency decisions, but so will the front seven that was 2nd in the league with 53 sacks on the season. In his first and possibly only season with the Rams, outside linebacker Leonard Floyd had a career year. Playing all 16 games, he registered 10.5 sacks and 11 tackles for a loss. Yet, with Floyd’s impending free agency, his replacement may come in the form of the 57th overall pick and Pittsburgh’s Patrick Jones III. The senior out of Chesapeake, Virginia managed nine sacks across 11 appearances in 2020 and is defined by his constant energy and speed coming of the edge. Not only able to collapse the pocket, Jones is also more than capable of pursuing mobile quarterbacks when they begin to roll out. In a division with Russell Wilson and Kyler Murray, being able to seal the edge and keep mobile quarterbacks in check is a huge necessity. Despite strong pass rushing instincts, Jones will need to sharpen his ability to drop into coverage and provide support against the short passing game. With Aaron Donald, the Rams will always be able to create pressure in the interior. The addition of a high energy edge rusher will only make opposing quarterbacks lives harder and allow the strong secondary to feast on rushed throws and inaccurate passes.

Much has been made of the arrival of Matthew Stafford and the value he adds to McVay’s offensive game plan. After another lost season in Detroit where his 4,084 passing yards and 26 touchdowns amounted to nothing more than 5 wins, many believe Stafford has made the Rams as potent on offense as they have been on defense. As seeb with Goff’s thumb injury heading into the 2020 playoffs, the backup options at the quarterback position are less than exciting.

Read More: John Wolford and the Game Plan that Got the Rams into the Playoffs

John Wolford only played one regular season game and attempted six passes before a neck injury ended his post-season debut. Even though he only played one full game, a championship caliber team needs a more qualified backup option in the chance Stafford misses time. Enter Jacoby Brissett from the Colts. Brissett has both championship experience from his time in New England and has started 32 games. His last full season as a starter he posted 2,942 yards and only six interceptions. While he more likely fits the mold of a backup than a starting quarterback, Brissett has enough actual in-game experience to be trusted as a starter in small doses. It doesn’t hurt that he spent his rookie year in New England under the guidance of Bill Belichick and understands what championship culture looks like. In such a competitive division, having a capable passer ready in case of injury can make all the difference.

Unlike the other teams in the division, the Rams enter the 2021 offseason with a strong sense of what their team will look like. All their key contributors are under contract, their coach is one of the best in the league, and they have upgraded at the most important position: quarterback. The hope is that whatever small moves are made with limited draft capital and restricted cap flexibility will finally be enough to push the Los Angeles Rams over the hump and help them avenge the Super Bowl loss of 2019.