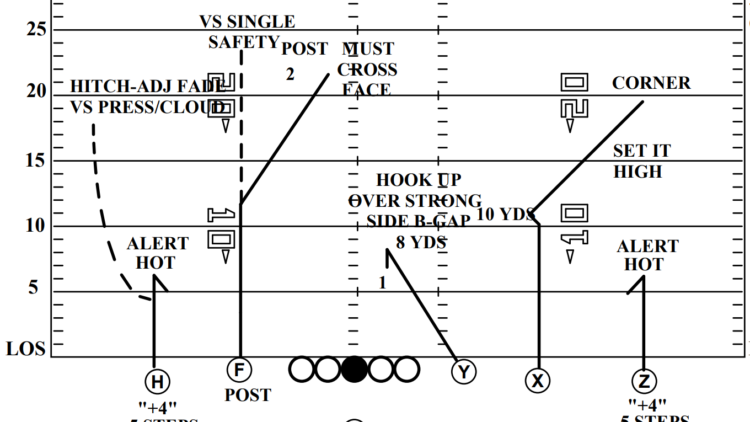 The Smash Concept is a zone coverage beater and is one of the most popular concepts to attack Cover 2 or Cover 4. The concept creates a vertical stretch on the flat defender and can attack the middle of the field with supplementary routes if the Smash concept itself is covered.

Smash targets the flat defender. It doesn’t matter if that defender is the corner in Cover 2, the outside linebacker in Cover 3, or anyone else assigned to the flats. As long as it’s zone coverage with one deep defender and one underneath defender to one side of the field, the concept will work. It forces that flat defender to either gain depth under the deep route and make the flats available or stay in the flats and open up a window behind them.

There are many different ways to get to the Smash concept, but the most common routes used are:

With those two routes, the flat defender is put in conflict and the quarterback can throw off of his movement. While the offense is creating a high-low stretch on the flat defender with the corner and the quick hitch, normally on the backside of the concept, teams will run:

That puts the play-side safety in conflict. That safety now has to choose between getting over to the corner, or staying in the middle of the field to protect against the post.

As mentioned, the Smash concept is most commonly used against two-safety looks because it immediately puts the corner in a bind and attacks the weak spots of Cover 2. Those soft spots in Cover 2 are the sideline 15-20 yards downfield and the deep middle of the field.

The first read for the quarterback against Cover 2 is the corner, who is the flat defender.

Read More: All-22 Look at Taylor Heinicke and His Big Day against the Buccaneers

The quarterback wants to attack the corner route if it’s available until the defense takes it away. If the flat defender gets depth under the corner, the quarterback will take the route in the flats underneath. While some teams run a quick hitch there, as long as you have someone occupying that area, the concept is effective. Washington here is using a leak out into the flats by their up-back. With nobody immediately threatening the flats, the corner gains depth under the corner route, which opens up space underneath.

Against Cover 2 man, the read is exactly the same. However, man coverage puts more emphasis on the receivers to win their routes.

The Chargers get Cover 2 Man here against the Falcons. Los Angeles has flipped the assignments on the concept though. The inside receiver is going to the flats and the outside receiver is running a burst corner. The “burst” part of the burst corner just means that he is bursting inside to gain space to eventually break back out for the corner. That burst corner beats his man, the flat route keeps his man underneath, and the Cover 2 safety can’t get over to the corner in time to impact the throw.

As a quarterback, your progression is:

Against Cover 3 or single-high looks which you more often get against trips formations, the concept can still be effective. In this case, the Buccaneers’ corner abandons his deep responsibility to attack the flat route. That opens up the corner behind him.

The Smash concept is a simple scheme with clear progressions and reads for the quarterback. While it’s best against Cover 2, it can work against other coverages as well. It’s best to have another concept combined on the backside to make sure that the offense has an answer for whatever coverage the defense throws at them.