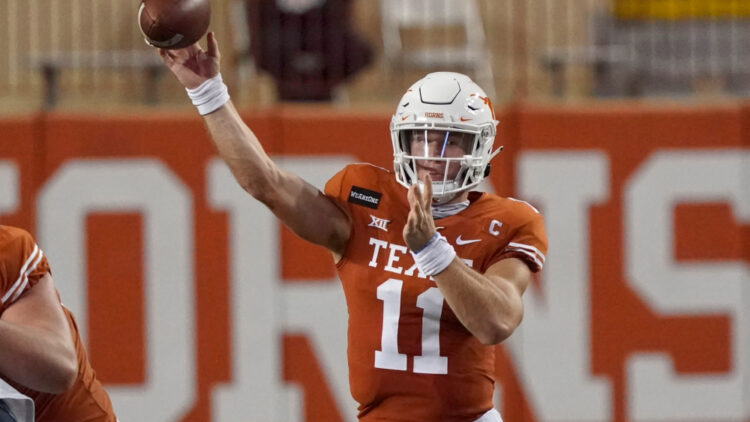 Texas' Sam Ehlinger (11) looks to pass against UTEP during the first half of an NCAA college football game in Austin, Texas, Saturday, Sept. 12, 2020. (AP Photo/Chuck Burton)

Whether they decide to relish that role or not, the quarterback is the de facto leader of every football team. Some try to be the leader and fail. Others, like Sam Ehlinger, take that role and blossom into a star. Texas never quite back to its glory days in his four years as a starter, but you can’t blame him. The hometown kid, Ehlinger improved every season as a player and often led the team in crucial moments where they needed a big play to be made. Some question his ability to be an NFL quarterback, but he has the intangibles you just can’t teach. When you have that unspoken x-factor, you put yourself in a position to succeed in any part of life.

Never phased by the moment, Ehlinger is a baller. Whether he had a 300-pound defender breathing down his neck or needed to go on a long drive to win the game, Ehlinger was always up for the moment. Seeing your quarterback act fearless and unfazed by pressure inspires teammates. Of course, some might say that this can only take you so far, but I’ll take these intangibles any day of the week. Build your team with strong leaders and then build around that.

Ehlinger is a tank. At 230 pounds, he’s built more like a full back than a quarterback. Because of this, he’s really tough to bring down in short-yardage situations. This is evident by his 33 career rushing touchdowns, most of which came inside of the five-yard line. While not a burner, Ehlinger knows when to tuck it and run. You have to respect his running ability even on third and long, where he can beat you if you don’t use a linebacker as a spy.

So much of what’s happening with NFL offenses is the quarterback making plays when everything around him breaks down. Look at just about every elite, young quarterback in today’s game and you’ll notice that they can extend plays with their legs. Whether it’s picking up the necessary yards or rolling out and finding a receiver down the field, they know how to extend drives. These quarterbacks also keep their eyes down-field and find receivers breaking off of their original routes. Improvisation is a trait that not just comedians need, but quarterbacks as well.

As a thrower of the football, Ehlinger is limited. He doesn’t have the length or velocity on throws that will inspire a team to draft him high. Right now, he doesn’t throw the best deep ball. He has some arm strength and accuracy issues going deep. On intermediate throws, he doesn’t have the zip required to fit balls into tight windows. However, he is working on refining his mechanics with the hope that it will put some more juice on his throws.

If you aren’t going to have a strong arm as a quarterback, you sure as hell better be accurate. Unfortunately, Ehlinger was far too inconsistent with his accuracy. Sometimes he would put the ball right on the money and other times would miss wide-open receivers. There was some improvement over his four years as a starter in this area but not to the level it should be at this point in his career.

Becoming a starting quarterback in the NFL is one of the most difficult jobs in the world. There are only thirty-two positions and you have to perform at a consistently high level of play or there’s plenty of replacements ready to take your spot. I think Ehlinger is destined to be a career back up, but there’s 100% a role for him in today’s NFL. Because of that, I wouldn’t be shocked if he proved me wrong and did one day become a starter. He does have some Dak Prescott in his game, but unlike Dak, won’t be ready to become a starter as a rookie. Put him in a system predicated on RPO’s and quick passing and Ehlinger could thrive. If all else fails, you could see him used in a Taysom Hill role and become a game-changer every time he gets touches the ball.

READ MORE: Trevor Lawrence: The Prince That Was Promised