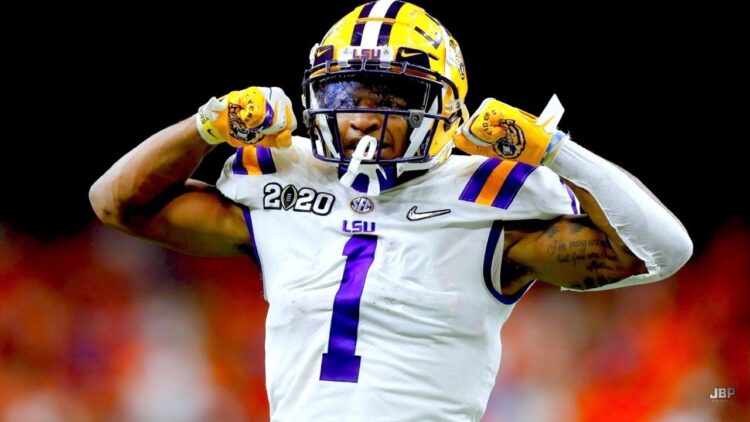 Ja’Marr Chase might have opted out of the 2020 season, but he’s still at the top of the board for receivers in the NFL Draft. When playing in 2019 with Joe Burrow, Chase racked up over 1,700 yards, 20 touchdowns, and averaged 21.2 yards every time he touched the ball. He showed great understanding of how to run routes, attack leverage, and use his quickness and burst on releases to get himself open. While there’s still work to do for him to understand the timing of concepts and utilizing his hands at the line of scrimmage, the talent and football IQ is clearly there.

Ja’Marr Chase was at his best on quick twitch routes like slants and RPOs. He was great at closing the distance on corners and getting onto their toes. That gives defenders less time to react to his eventual burst and cut. When he combines that with good hand usage at the line of scrimmage, he’s almost impossible to stop. He has elite change of direction and understands how to manipulate defenders and create space for himself.

Chase uses foot fire at the line of scrimmage to get the corner onto their heels and leaning backwards. That gives Chase that ability to now close space on the corner, force the defender to be worried about a deep route, and give him power and strength with his feet underneath him at the break point for the slant.

If defenses played off coverage on him, they stood no chance. Chase has strong hands at the point of the catch and excels on contested catches over the middle. Even when he doesn’t win on the route, he showed the ability to be able to outmuscle defenders and get to the ball.

Chase also did a great job of tying his routes together. That same stutter or slide release that he’d use on his slants, he’d also use on fades. Here, he does a great job of slowly widening to get his outside release while stopping the DBs feet. He then works to remove the hands of the defender and fights to stack back on top of him. That gives Burrow more room to throw him to the sideline.

That same exact slide release outside to widen the corner was used on this slant against Georgia. When you can make your releases look similar and set up defenders by attacking their leverage, you’re playing receiver at a different level.

He also showed that he could use his releases to buy time to open himself up. Here, LSU is running a rub for him as he releases on a fade from the slot position. However, he needs to wait long enough for the other receiver to get in front of that defender to create the rub. He gives two jabs and then immediately turns on the jets down the sideline to get open for a big play.

While Chase did have times where he won against physical corners, he also had a lot of reps where he could not get off the press and did a poor job using his hands. Instead, he often tried to fight physicality with physicality. When you’re stronger than some of the guys you’re going against, that can work, but when you aren’t, you’re going to get in trouble.

Instead of actively fighting to remove the hands of the corner here, Chase chooses to go with a bench release, which, as it sounds, is essentially an attempt to bench press the corner and create immediate separation. When that initial punch doesn’t work, he gets locked into physical battles that take him completely out of plays.

When it works, the bench release can be great and get the defender off balance. You’re just risking taking yourself out of the play on quick hitters if you don’t win on that release.

Often, it felt like Chase was too involved in the physicality and less involved on the nuance of removing hands and just flat-out getting open.

Regardless of whether it was at the line of scrimmage or into his route, Chase was incredibly inconsistent at removing defenders hands and was frequently re-routed. As a receiver, you want to avoid any contact and get to your break point and spot as fluidly as possible. Any collision on the way and you’re quickly going to be left behind in the quarterback’s reads.

Especially on fades when he was working to the boundary side, corners would use their leverage and wash him to the sideline and out of bounds. Instead of being patient and expecting the punch when players are walked up on him, he instead leaves his hands and takes blows that wash him out of the play.

The thing is, Chase has shown that he’s capable of using his hands through his route. He’s just inconsistent in doing it. All through the route here, Chase does a great job of continually removing the hands of the defender. That hand fighting all through the route is incredibly important for receivers to maintain their stem and speed and prevent the defender from feeling them while they turn their head to locate the ball.

Chase doesn’t necessarily lack strength or shy away from contact. He has a mean streak and has no problems doing dirty work and playing strong and physical. That’s a trait some GMs will absolutely love. His battle with Trevon Diggs was incredibly physical and he won more than he lost. Despite being knocked off balance at the line of scrimmage, Chase is able to eventually recover and match that strength. He fights to get into his route and then beats Diggs over the top.

Tough to Bring Down

He also runs hard after the catch with the ball in his hands. He’s a tough player and isn’t going to go down easily and won’t back down from any matchup.

Where it becomes a problem though is when he seeks out that contact in his routes and then has trouble disengaging afterwards.

Keep in mind though, Chase was 19 years old when he was doing all this and didn’t play this year. If he’s been in the gym and has added strength to that frame, he’s going to be able to match with and play with that physicality at the next level.

While there’s a lot of hype around Ja’Marr Chase, he’s maybe not as polished and finished of a product as people may think. He shows that he understands how to manipulate defenders, has the desire to be physical, and is aggressive to the ball, but it’s controlling that aggressiveness and physicality that will serve him best at the next level. Whoever takes Ja’Marr Chase in the NFL Draft is going to get a savvy guy with lots of route nuance, technical skill, and a guy that isn’t afraid to mix it up. If you aren’t ready to match his physicality and don’t have the speed and quick twitch to keep up, it’s going to be a long long day on defense.