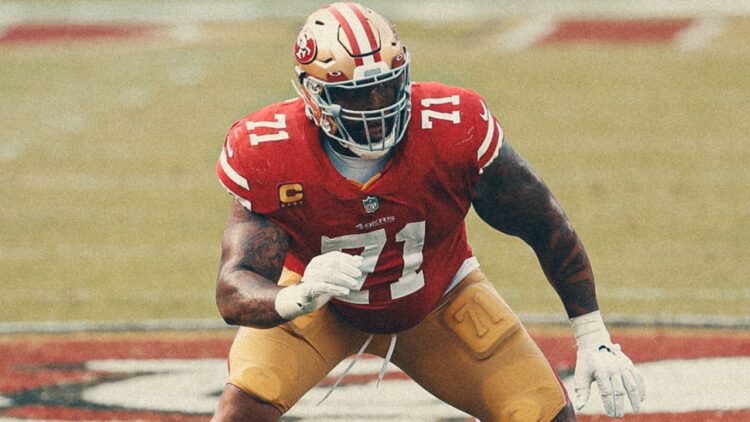 Teams are built through the draft, but free agency can take them to the next level. With the salary cap shrinking to $182.5 million (down roughly $16 million from 2020) teams might be more hesitant to give out big contracts. Time will tell obviously, but here are our top 30 free agents in 2021:

Williams didn’t lose a step after missing the entire 2019 season and should see a contract upwards of $20 million per year. He was unable to reach a contract with the 49ers before free agency which leaves other suitors the chance to step up and grab one of the best left tackles in the game.

Barrett went from a struggling pass rusher in Denver to an absolute stud in Tampa. He was the most critical piece to their championship defense and should have a ton of suitors. The sack production he brings does not grow on trees.

While Golladay did pick a bad season to get injured, there’s no doubt he has the upside of a WR1 on most teams. The Lions should be aggressive in trying to re-sign him, but without Stafford will he be interested in returning?

The Cardinals just signed J.J. Watt and could be a really special defense if they can retain Reddick. After moving all over the defense in his first three seasons, Reddick settled in as an edge rusher and had 12.5 sacks. He’s still a developing player and might have as high of a ceiling as any free agent on this list.

Offensive tackles make the money, but guards are a critical piece to any offense. This free agency class is deep at the offensive line, but Thuney is one of the best in the business.

As being one of the top right tackles in the league, seeing the Chiefs release Schwartz came as a huge surprise. It’ll be interesting to see if he wants to take less money and go to a contender, or go for the money. Either way, Schwartz will have plenty of options.

Ngakoue forced his way out of Jacksonville, made a pit stop in Minnesota, and ended up finishing the year strong with Baltimore. Only 25, he’s one of the younger players available. I’d expect a big deal for Ngakoue.

When healthy, Fuller is one of the more explosive deep threats in the game. However, he’s never been able to consistently stay on the field and was just suspended last year for PEDs. Assuming that situation is cleared up, Fuller will see big money based on his potential.

Judon’s offseason so far has been…interesting. He’s a steady player on the edge and still figures to have a few good years left. I’m not sure the Ravens will bring him back based on the money he’ll ask for, so he’s a good option for a defense looking to add some pass rush.

While Jones has had back-to-back good seasons, does anyone consider him to be worth top five running back money and around $12 million a year? Personally, I don’t think so. Someone may poney up, though. Luckily no team has ever regretted paying a running back over $10 million a year…

READ MORE: Aaron Jones Might Be the Best Zone Runner In Football

Coming into 2020, Hendrickson had 6.5 career sacks. This past season alone he had 13.5. Some might be concerned with just the one year of huge production, but he’s playing a valued position. A team might go for a shorter deal that gives him more per year than projected, but at worst he’s an above-average defensive end.

When he’s not on TikTok making enemies, Smith-Schuster is a solid receiver. He did much better as a #2 behind Antonio Brown, but is the youngest free agent on the market and can play in multiple schemes.

While Aaron Donald and Jalen Ramsey get most of the credit for the success of that Rams defense, Johnson is the unsung hero in the back end. He’s had two seasons with over 100 tackles and has had eight interceptions in four years.

After going fifth overall in the 2017 draft, Davis showed he was capable of being a good starting receiver in 2020. Any team that thinks they can still develop him and help him reach his ceiling will try and lock him in on a long-term deal.

The top center on the open market, Linsley was named an All-Pro in 2020 and has plenty of experience at the position. He has to be the top priority for the Packers, but he could see more lucrative options if he decides to look elsewhere.

The A.J. Green that was so dominant in early to mid-2010’s is gone. There’s still hope that he can be a solid WR2, though. He should still have a number of teams searching for his services.

The real question is how soon can Dupree return from the torn ACL he suffered in Week 12. If he’s ready to go by September or October, he could see a multi-year deal. If not, he might just want to wait a season for the salary cap to go up and play 2021 on a prove-it deal.

Floyd was considered a solid, but unspectacular edge defender before his 10.5 sack season with the Rams in 2020. I don’t know if you can expect anything more than seven or eight sacks from him, but he’s a good run defender who knows his role on defense.

When healthy, Carson is a solid running back and can legitimately give you 20+ carries a game. However, he’s never played a full 16 game season and may not be returning to Seattle due to their cap situation.

The top tight end on the market, Henry has never eclipsed 700 yards receiving in a season and has never shown the ability to stay healthy. He is a dynamic receiver, though, and has proven to be effective in the red zone.

Harrison Smith is the Vikings safety that gets the most attention, but Harris has played very well the past three seasons. That’s including a 2019 campaign where he led the league in interceptions. He isn’t a flashy name, but is a quality starter and smart player.

Knowing how Clowney operates, he won’t sign until August or September. He’s a guy full of talent, but never has lived up to his #1 overall selection. He cashed in last season with a $15 million contract and should once again receive a one-year deal.

The Seahawks secondary may no longer be considered the “Legion of Boom”, but Griffin has impressed in Seattle. He’s been a starter since his rookie season and could be a popular name due to the demand for corners.

Left tackles rarely hit the market, which makes Villanueva a hot commodity. At age 32, he might look for the biggest contract he can get.

In 2020, We finally got to see a glimpse of what Curtis Samuel can bring to a team as an offensive weapon. He’s not going to be a WR1 for anyone, but is a dynamic athlete who provides a ton of RAC ability.

While Lawson’s best season was his rookie campaign in 2017, he has proven that he has the tools to be a steady pass rusher in the NFL. That, along with the fact that he is only 25, means he should be looking at a multi-year deal.

A possible Hall of Famer one day, Peterson is on the wrong side of 30 and might need to take a shorter contract to boost himself into a bigger one next offseason.

Verrett was a revelation this season for the 49ers, but comes with a ton of injury questions. He’s never played a full season and only appeared in six games from 2016-2019. He will probably never see a long term contract, but will see a pay raise compared to what he’s had the last few years.

Ingram is another guy who is coming off an injury and didn’t play much in the 2020 season. He’s going to be 32 at the start of next season so there are questions about how much he has left in the tank. If he can stay on the field, he would be a great secondary pass rusher that has experience in multiple systems.