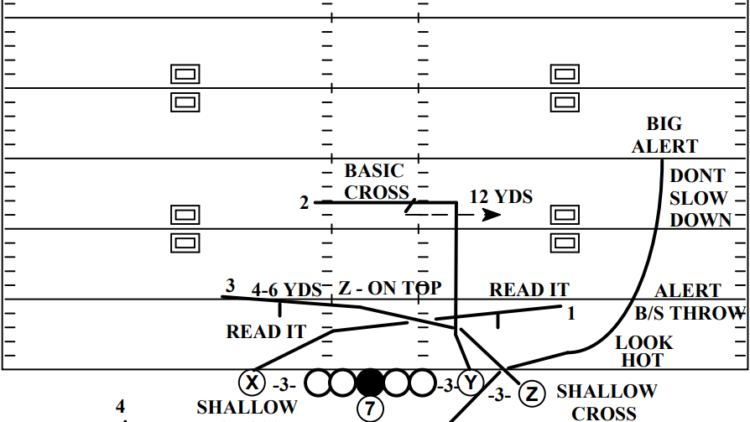 The Mesh concept is a classic man-beater that creates rubs and picks as players run across the field. While primarily used against man coverage, it can also be effective against zone by having receivers throttle down in open space.

Against zone, players settle in space after they clear the tackle on the opposite side. That requires defenses to transfer zones and pass off routes.

Many teams attempt to create even more of a rub and will run a spot or cross sit route alongside the higher drag route. That creates one extra level for the chasing defender to have to navigate over and can create even more separation. Against zone, that spot route can often settle in a vacated area as players chase the drags.

Other systems use basics or digs over the top to create a high low read between the drags and the dig at 10-12 yards. The spot route is better for man coverage, the dig is better to attack zone.

Teams will also utilize the running back to clear play-side space for the shallow drag. A flare or swing from the back pulls the play-side linebacker out to the flats and opens up a window for the drag coming across behind.

The Mesh concept wants to get the ball to the underneath drag. However, there are a few things the quarterback needs to read before he gets there. That route takes time to develop, so it can’t be the first read in the progression. You’ll almost always see tight formations or the two drag routes run by slot receivers or tight ends. That helps make the concept hit quicker.

Generally, there is also a deep route somewhere in the play to attack vertically if space is available. For the quarterback, the reads are:

The Vikings are running Mesh out of an empty formation here. There’s no running back, but you have a receiver out in the flats to immediately pull the flat defender and try to out-leverage them. There is a corner route and the two high and low shallow drag routes. The quick out widens the flat defender, the rub in the middle creates separation, and there’s a window to throw the shallow drag.

Comparatively, the spot route variation can make it almost impossible for a defender to track across the field with the shallow drag. Two separate rubs create a lot of separation and space to run.

When the running back or immediate flat route wins leverage outside, it’s a great high percentage throw that gets your player the ball with a chance to turn the corner. That spot route is effective both for springing the back and the shallow drag. Here, the #2 receiver is able to hook up and force the linebacker to track over the top to chase the running back going to the flats.

Both of the shallow drags can also settle in zone coverage so that they don’t run into waiting defenders.

Double Move Off of Mesh

Teams will also find ways to work double moves off of the Mesh concept. Once teams run Mesh a few times, they can attack aggressive defenders. Defenses eventually know that the picks are coming and shoot underneath the routes. Here, the Raiders wheel back out of the Mesh concept to exploit the Texans who are trying to follow in man. The rub still gets a piece of the trailing defender to create even more separation.

The Mesh concept is a great solution for attacking man coverage. It schemes space, can exploit speed mismatches, and is a high percentage throw. When defenses adjust, there’s always a wrinkle to add to make them pay and when it’s run well, it’s almost impossible to defend.