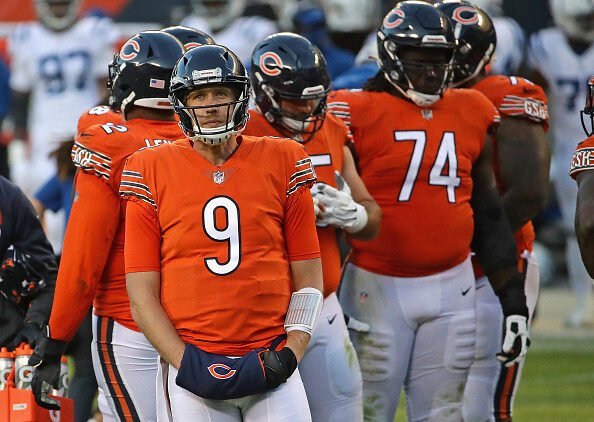 The Chicago Bears saw their season end in 2020 after achieving an 8-8 record and losing in the Wild Card round. Although making the playoffs is an accomplishment, their season was a disappointment. The quarterback situation was a disaster all year as Mitchell Trubisky and Nick Foles struggled to find consistency. The uncertainty at quarterback was the main catalyst to their failed season. They have not made many moves in free agency so far, but made a splash after franchise tagging Allen Robinson, who is their top playmaker on offense. Keeping Robinson long term should be a priority going forward and is the first step to keep this team competitive. The Bears have needs on the offensive and defensive line, but none of it matters if they cannot find the right quarterback to lead this team.

With Mitchell Trubisky now a free agent, the biggest need for the Bears next season is a quarterback. Nick Foles is still under contract, but it is unlikely that they commit to him long term. During his stretch replacing Trubisky, Foles led the Bears to a record of 3-5 and had them potentially missing the playoffs. The Foles flame sizzled after his hot start in Atlanta, as he ranked 31st in passing efficiency. Nick Foles is not the answer, but I do believe has value as a bridge quarterback. Now that the Bears have signed Andy Dalton, the question is whether Chicago will still aim to take their quarterback of the future in the draft.

After failing with Trubisky, the Bears find themselves searching for their QB1. There is buzz around Russell Wilson seeking a trade with Chicago, but there is no evidence of a deal. Trey Lance is the quarterback the Bears need to target in the draft. He was impressive at his pro day and proved he can make all the throws at the NFL level. He is a physical runner with sneaky speed that makes read options and RPOs effective. Lance has great decision making and can throw on the run if forced out of the pocket. He does have concerns with his accuracy, but that can be fixed with improved mechanics. His skill and versatility makes this offense dynamic and would be a force when paired with David Montgomery, Allen Robinson, and Darnell Mooney.

Although both quarterbacks were ineffective, some of the blame can be placed on the offensive line. They hoped to fix their issues by signing Charles Leno Jr. and Bobby Massie, but neither panned out. Massie struggled with injuries and missing 14 games in two seasons. Leno Jr. has been a consistent starter, but his performance has not represented his contract value. The Bears released Massie creating a need at tackle. That could turn into two tackle spots to fill if Leno Jr. becomes a cap casualty. With the cap number lower this season, it creates limitations on securing a quality lineman in free agency and forces the Bears to try and fill this need through the draft.

The Bears can alleviate some issues by drafting Samuel Cosmi from Texas. At 6’7, 310 pounds he is very athletic for his size. He uses his athleticism on zone runs and has success pulling and reaching the second level. He has the ability to use angles and drive defenders to create running lanes for running backs. Cosmi also has good length that makes him adept at blocking pass rushers trying to turn the corner. He has concerns around his technique, but those are issues that can be easily addressed. Picking at 20 in the first round, The Bears can secure a talent that can play both tackle positions with potential to be their left tackle of the future.

Read More: David Montgomery Can Change the Identity of the Bears Offense

While the defense has played well, production at linebacker was a problem for the Bears this season. The group struggled against the run and allowed four yards per carry with over 100 yards a game. While Roquan Smith was the lone bright spot, the dark cloud was Danny Trevathan. Although he finished the season strong, Trevathan’s production declined in all areas and he struggled the most in pass coverage. His pass coverage efficiency was graded as a 46.4 on the season. According to PFF, he ranked as the 56th linebacker in the NFL out of 65 qualified players. With Trevathan on the wrong side of 30, they may want to pursue younger replacements even after last year’s contract extension.

The Bears should use their first round pick on an offensive lineman, leaving them to find a linebacker in a later round. This opens the door for them to select Jabril Cox in the second round. Cox gained most of his experience in the FCS conference, but was able to show his talent translated to the SEC at LSU. He has great size at 6’3, 230 pounds and is incredibly agile. Cox has the ability to run sideline-to-sideline and fills well on the run, but is inconsistent and has difficulty shedding blocks. He excels in coverage on backs, tight ends, and receivers in the slot. Cox needs more experience against top talent, but can be the dynamic linebacker in coverage the Bears need. Adding him would fill a big hole for this team.

The Bears have smaller needs elsewhere, but they can set themselves up for success by prioritizing these three positions. Offensive line depth is always good to have and is a high need for the Bears going forward. They can look to add to their receiver core with Anthony Miller a free agent, but they are in good hands with Robinson and Mooney. This offense is primed with playmakers and the defense has the ability to shut out opposing offenses. This team has the right collection of skill players to be Super Bowl contenders, but they will only go as far as their quarterback takes them.