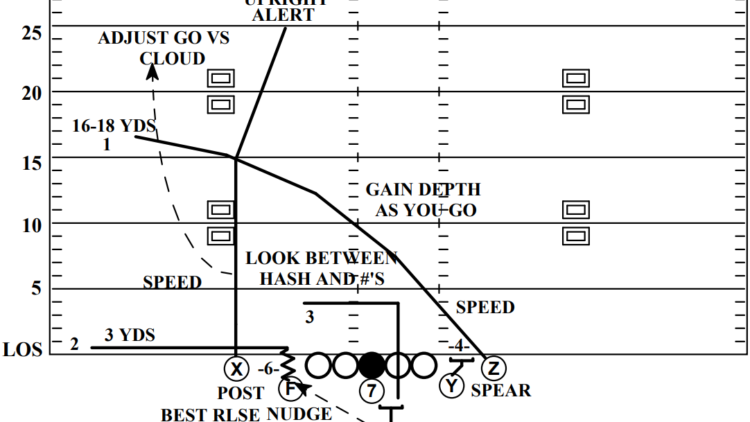 The Yankee concept is a two-man route concept that is primarily used out of run-heavy formations to attack single-high safety looks like Cover 1 or Cover 3. It’s a deep shot play that puts the middle field defender in conflict with a deep over route and a post behind it.

Yankee is a longer developing play. It is usually run off of play-action with eight- or nine-man protection. The run-heavy formations force the defense to bring guys into the box and ensure a single high safety look.

The Yankee concept consists of two primary routes. Sometimes, there is a tertiary check down with running backs or pass protectors leaking out into the flats. Those routes are:

The Yankee concept creates a high-low read on the safety with the over and post routes. It also puts linebackers in a bind by showing run and having the deep over behind them. When the safety stays over the top, the linebackers need to be able to get depth. If they don’t, get underneath the over route, there’s still an opportunity for a big play.

This essentially creates two separate high-low reads with only two routes. The third “route” is the play-action fake. Those reads are:

As a result, the read for the quarterback is pretty simple:

The Bills here are attempting to bracket the post. However, with the safety coming down on the over, that opens up the middle of the field. Whoever is running the post needs to have some real speed to make sure that they can get behind the defense.

Despite the corner to the bottom of the screen spinning off the over to help get under the post, the vulnerability deep is already there. As a result, Brady is able to put the ball out far enough for the touchdown.

Usually, though, the safeties stay on top of those deep posts. When that happens, the quarterback immediately comes down to the over so that he can get the ball in before the underneath defenders get depth off of the play-action. If the offense runs someone into the flats off the play-action like the Cowboys do here, that can make it even more effective in keeping defenders down.

The play-action by the Titans here is especially impactful on the linebackers and opens up a huge window in the middle of the field. They’re able to get Corey Davis the ball on the run with the opportunity to make something happen after the catch.

Since it’s a longer developing play, teams will even run the concept off of a flea-flicker. All the same rules apply, it’s just extra impactful on the linebackers and is great for hitting the deep over.

While it isn’t great against Cover 2 because the safeties can bracket the post, Dallas ran an over return against that look to help make it work. By having the over flash in front of the Tampa 2 linebacker and then return back to the field-side safety, he’s able to hold both defenders and prevent them from getting under the post from the other side.

Yankee is a great concept off of play-action to attack teams that are worried about the run. You need someone with some true speed to run the post, but if you’ve got that guy and a credible run game, it can be a huge gainer.