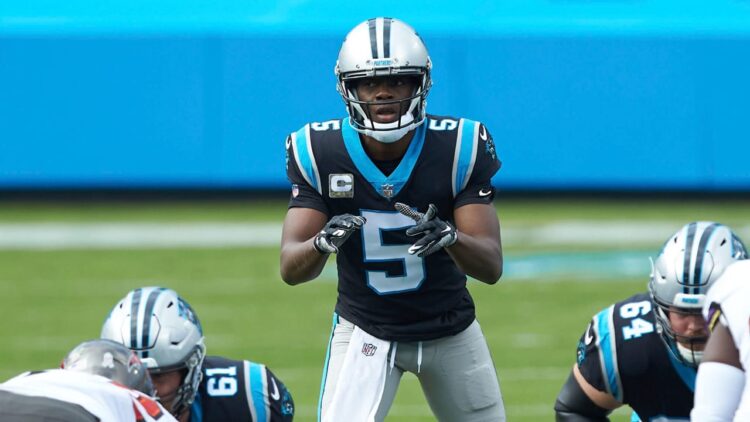 The Carolina Panthers’ 5-11 record comes as a disappointment to many in the organization. First-year coach Matt Ruhle needs to improve the team’s mediocre offense (24th in the NFL) and defense (18th in the NFL). Quarterback Teddy Bridgewater was given the reigns and posted only 15 touchdowns to 11 interceptions despite strong seasons from Robby Anderson and DJ Moore. Additionally, the 2020 Panthers saw star running back Christian McCaffrey miss all but three games after signing a $64 million contract. With another year of experience, the 8th pick in the draft, roughly $30 million in cap space, the hope is that Carolina can make a run at a playoff spot.

Teddy Bridgewater parlayed a strong five-game streak with the Saints in 2019 into a 3-year, $63 million contract with the Panthers. Yet, even with two receivers breaking the 1000-yard mark and a third reaching 850 yards, Bridgewater still struggled. With a top ten draft pick and a loaded quarterback class, the answer behind center may come on April 29th.

When at his peak, Justin Fields challenged Trevor Lawrence for the title of best quarterback in college football. His performance in the college football semifinals completely decimated Clemson. His 385 yards and six touchdowns displayed his ability to work the short passing game and create explosive plays with his strong arm. Unfortunately, there have been red flags that have allowed other quarterbacks to surpass him in the eyes of some. At 6’3, 228 pounds there is little doubt that Fields has the strongest arm and the ability to avoid the pass rush. He may be the most physically gifted quarterback in the draft, but scouts have noted that some of the mental aspects of his game still require refinement. His three-interception, five-sack game against Indiana showed a lack of pocket awareness and failure to go through his reads. Fields could easily be one of the first five players off the board come draft night, but the rise of players like Trey Lance and Zach Wilson could allow the Panthers the chance to pick him at number eight.

Regardless of who lines up behind center for Carolina, the offensive weapons for the Panthers have the potential to be elite. With thousand-yard receivers out wide and a running back capable of a two-thousand-yard season, the one position missing is tight end. Carolina’s three tight ends accounted for 204 receiving yards and 27 receptions in 2020. Players like Travis Kelce and George Kittle demonstrate how dominant a pass-catching tight end can be. Carolina on the otther hand, is missing that type of player to attack the middle of the field.

Read More: How the Chiefs use Travis Kelce to make him unstoppable

Read More: The Little Things George Kittle Does to Improve the 49ers Offense

Kyle Pitts is the definition of a matchup nightmare. There are very few 250-pound receivers that have 4.4 40-yard dash speed. His physical dominance was on full display during the 2020 season. He accrued 12 touchdowns and an average of 18 yards per reception. Against Ole Miss, Pitts dominated with 170 receiving yards and four touchdowns. Even against top seeded Alabama, he managed 129 yards and found the endzone. It is uncommon for a tight end to be valued so highly, but if Carolina is willing to give Bridgewater another chance, adding Pitts to a core of McCaffery, Moore, and Anderson could give Bridgewater all the weapons needed to elevate the 18th ranked pass offense. Pitts is not much of blocker and prefers to come off the line as a receiver. If he can work on his skills as a blocker, he may develop into a de facto lead pass catcher who can battle along the trenches and open holes for McCaffery.

During the 2020 season Carolina rostered 17 defensive players with three or less years of experience in the NFL. While players like Jeremy Chinn had flashes of high-level potential, the Panthers may want to invest in veteran defensive talent to reinforce all three levels of their defense. In a division with playmakers such as Tom Brady, Alvin Kamara, Julio Jones and more, a young defense may struggle to keep pace with some of the most explosive offensive weapons in the NFL.

Clowney has had an up and down career despite his first overall pick pedigree. In his most recent campaign, the three-time Pro-Bowl player only managed eight games and failed to produce a single sack. He also only generating six quarterback hits. While his last two seasons have underwhelmed, Clowney is only 27 years old and managed a 75 overall player grade even without gaudy pass rushing numbers. Carolina could leverage a down statistical season into a cheap contract for Clowney and add a pass rusher who is only a few years removed from a nine-sack season.

Another proven contributor who may find himself on the move is ten-year veteran K.J. Wright. Wright has never received the praise fellow linebacker Bobby Wagner does, but has been a solid contributor when rushing the passer, stopping the run, and dropping into coverage.  At 31, Wright posted a respectable 60 solo tackles, 10 passes defended, and recovered two fumbles. Most importantly, he brings Super Bowl caliber leadership to a young team. With 15 playoff games and two championship appearances under his belt, Wright is the definition of experience and durability. Across his ten seasons he has only missed substantial time in 2018 and has produced at least 60 solo tackles in all but three seasons.

The last player that could operate as a cheap yet experienced option is Richard Sherman. Sherman at one point was in contention for the best cornerback in the league. However, age and injury limited him to only five appearances in 2020 and he has not suited up for a full season since 2016. In his five games this past season, he allowed four touchdowns to only one interception. Carolina could still value Sherman’s ability to mentor their young defensive backs and provide glimpses of his old “Legion of Boom” self.

Allowing coach Rhule another year to implement his scheme, continuing to develop young players, and the return of McCaffery should lead to an improvement in the standings. Yet, Carolina will need to spend its draft picks wisely and should look to bring in experienced free agents to help separate themselves in a strong NFC. With cap flexibility and other teams in the division unsure about their futures, it’s time for Carolina to make a move.