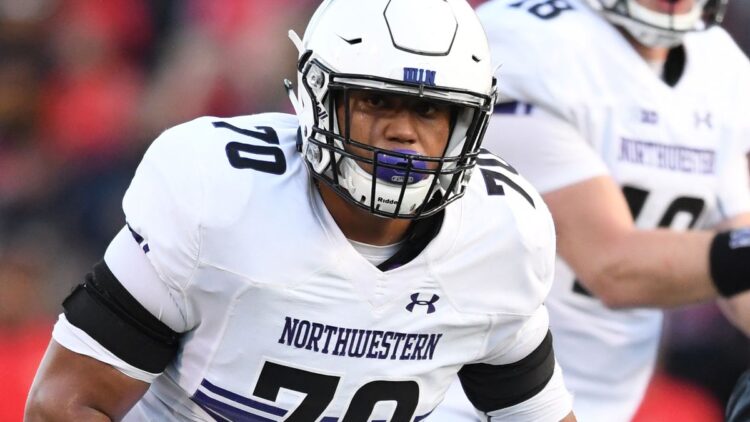 Northwestern’s Rashawn Slater may have opted out of the 2020 college season, but he has seen his stock rise more than any offensive lineman over the past few months. His name started heating up when NFL Network’s Daniel Jeremiah called him the top offensive lineman in November. Northwestern isn’t a football powerhouse, but a talent like Slater makes him a slam dunk top ten pick. His versatility is a huge plus for him, but his talent and refinement are what sets him apart in a class with he and Oregon’s Penei Sewell as the top two linemen in the 2021 NFL draft.

Read More: Why Penei Sewell is a generational talent at tackle

Slater’s ability to move and get to the next level on blocks is probably the best in this class. We see this mostly in the run game where Slater is tasked with moving both horizontally and vertically to block linebackers and defensive backs. Many offensive linemen can get to the next level, but don’t have the quickness to keep faster players in front of them. Slater, however, is just destroying these smaller players and clearing massive holes for his skill guys.

If you want to play left tackle in the NFL then you have to be able to keep your quarterback upright. Slater went up against top competition in the Big 10, notably last year’s #2 overall pick Chase Young. The game against Ohio State and Chase Young is what most people point to and say is where Slater made a name for himself. Whatever Young threw at him, Slater had an answer for it. He’s quick enough to kick out and stop speed rushers and has the hand power and anchor ability to fight back against bull rushers.

From a technical point of view, Slater checks all the boxes. He excels at the fundamentals of playing the offensive line, which when combined with his athleticism means he figures to be a solid player for the long haul. Whether it’s keeping his hands inside of the shoulder pads or using his lower body to anchor, Slater is so good because he does the little things right.

While Slater has been a left and right tackle in college, many believe he has the versatility to play all five positions across the line. He may very well end up being a guy who starts at guard as a rookie or in his second year before kicking outside to play tackle. This versatility makes Slater an attractive option in any system.

For being so quick, there are some times where Slater is a step slow out of his stance. This usually takes place in running situations where he has to cover for a pulling guard. When this happens, the offensive line blocking down has to do whatever it takes to block the newly free player. Slater would be late on the snap and then try to make up for it with pure power, which didn’t always work out in his favor.

At 6’3″, Slater doesn’t have the desired height or arm length for a tackle. Because of this, some believe he is a guard or center only.

While I don’t have Slater as my top overall offensive tackle, he’s a very good prospect and should be a top ten pick. That being said, some teams will have Slater as OL1. Like I said earlier, Daniel Jeremiah of the NFL network has him as the top lineman. Jeremiah might be the most tapped-in draft media analyst so we should take what he says very seriously. I’d personally start Slater at left guard and after a season or two, move him to left tackle if he’s playing at a high level. Regardless, Slater is going to be a solid starter for just about any team as a rookie and should continue to produce for years to come.