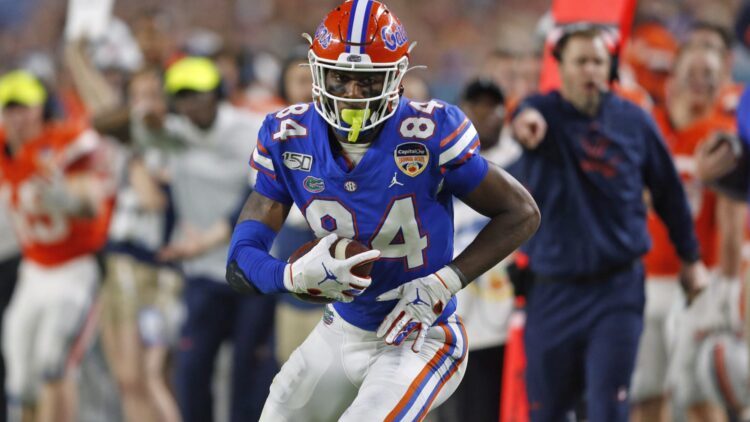 In 2020, Kyle Pitts launched himself into high first round discussions with 770 receiving yards and 12 touchdowns in just eight games with the Florida Gators. He’s a dominant force on contested catches and is a more than solid blocker. He uses power to root out defensive linemen on down blocks and is athletic enough to match up with corners and linebackers in the open field.

Kyle Pitts may be the best pure pass catcher in the 2021 NFL Draft. His body control, eye discipline, and aggressiveness to the ball makes him incredibly difficult to defend even when defenders are in the right position. He has soft hands and no fear. Catches that should be contested look routine for him and at 6’6” and 246 pounds, he’s tough for corners and linebackers to match up with physically. He consistently catches the ball away from his body and finds ways to out-leverage defenders at the catch point. While he might not run away from anyone on the field, he does have the speed to go against corners and threaten them deep.

While his work as a pure catcher puts up the stats, what really popped on tape for me was his willingness and ability to block in the run game. Kyle Pitts was asked to both root out defensive linemen and also climb to the second level and deal with smaller, but more elusive defenders in linebackers and defensive backs. Regardless of the block asked of him, Pitts was incredibly technical. His ability to recognize and diagnose defensive flow within the blocking scheme makes him a great fit for a team that bases out of a zone run game.

Florida is running outside zone here against Kentucky. The goal is to seal the end and get outside. If the outside is taken away, the running back reads one hole inside until there’s an opening. When climbing to the second level on the perimeter where there’s flow from the defense, it can be very easy to be over eager and lose fundamentals. Pitts, however, maintains his base, is patient, and engages the defender downfield while keeping his eyes up with good leg drive.

Even when he’s split out, Pitts shows great technique and discipline in his blocking.

Kyle Pitts can match up with defensive linemen and shows a really good understanding about what the goal of run schemes are. Here, Florida is running a QB power with Kyle Trask. The entire line is down-blocking with the guard wrapping around. Pitts takes his initial steps on the down-block and when nobody appears, he recognizes that he needs to come off to find work. He attaches to the defensive end which allows the guard to come through and get the linebacker.

When working against defensive linemen, Pitts shows that he has great lower body strength. His wide base and foot churn helps him displace guys at the line of scrimmage. He’s quickly able to get inside on the lineman’s chest here and keeps his base while taking small, deliberate steps. That keeps him balanced and in front while removing the defensive end from the running lane.

Pitts isn’t afraid to stick his nose in there and get work done in the box, either. That utility opens up a ton of stuff for him in the pass game for a team that likes to use play action and work their tight ends off of establishing the run game.

Where Pitts does struggle is with pulling and crunch blocks. While he isn’t afraid of the contact, he can be very timid and slow on his pulls as he looks to locate defenders. As a result, a lot of the time he’s so slow that it allows penetration, he’s stopping in the running lane, or he isn’t in position to generate enough power on a kick out block.

As an in-line tight end, he’s fine in the run game. In the pass game, though, he can struggle with releases and does a poor job of removing jams when lined up at tight end or in the backfield. It’s not an easy thing to do, but too often he got removed from plays because he couldn’t cleanly get off the line of scrimmage.

He possesses all the physical tools to play outside and at times, applies route technique really well. Often, though, he doesn’t tie things together in a way that would challenge and threaten defensive backs covering him. Pitts would often slow play his releases which prevented him from gaining ground on corners and threatening them vertically. With no threat vertical, corners never feared him and opened up other routes to him. That caused him to sometimes struggle to create separation for himself.

Here’s a great example of that as Pitts does a slow slide release with some high steps after. The corner keeps his cushion on him since he’s moving slowly and isn’t attacking vertically. That means that the route takes longer to develop and he isn’t putting any pressure on the defender.

Compare that now to when Pitts works to attack the leverage of the defensive back. Pre-snap, he diagnoses that the corner is shaded outside which likely means he wants to protect Pitts from an outside release. Pitts then works quickly to push slightly outside and hold that defender flat footed while also creeping up to close some space. Now, when he breaks, the corner is leaning backwards to defend the sideline which helps Pitts create separation on the slant.

Pitts definitely showed glimpses of tying in route technique for additional separation in spurts. It’s just finding when and how to apply them to make them more effective. When Pitts used his body and speed to close space on defenders, he looked unstoppable.

When he rounds into his route and doesn’t threaten guys vertically, it makes him look slow and like a guy that will specialize as only a red zone threat.

Kyle Pitts is incredibly polished as a blocker and one of the best pass catchers in the NFL Draft this year. 50/50 balls turn into 70/30 balls and the guy is lethal in the red zone. He’s more than willing to stick his nose into the run game, and with some coaching, work on his routes, and in a play-action centric system, he could quickly become one of the best skill players in the league. The tools are there and there are signs that things are coming together. That’s scary news for whoever goes up against him because when his talent is being maximized, it’s going to be a nightmare for defenses.