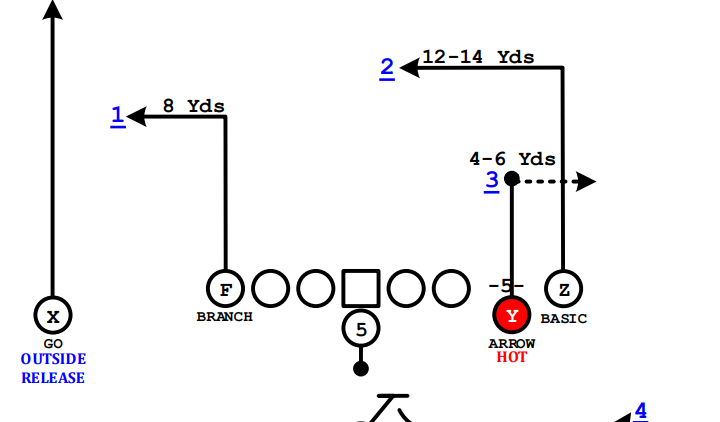 The Bow Concept is a play that’s utilized by the Shanahan and McVay trees. It stems from the Arrow concept that is more commonly used across the NFL. Bow works to hold the Hook/Curl defender with a short route underneath and wraps a dig route behind it.

Bow is a zone coverage concept that attacks linebackers assigned to the Hook/Curl area.

With those two routes, the Hook/Curl defender is put into conflict and the quarterback can throw off of their movement. If the defender gets depth underneath the Basic, the hitch will be open. If the defender stays attached to the hitch, there will be a window behind as the Basic wraps around. When defenders attach to the hitch, players will work away towards the sideline.

The Bow concept wants to attack linebackers to put them in a high-low read. Bow is usually run out of a condensed formation to create the read more quickly. Without tight spacing, the defender isn’t put in conflict and separate defenders can take each route.

The 49ers run the Bow concept here with Brandon Aiyuk running the hitch and George Kittle running the Basic from the tight end position. That makes #54, Bobby Wagner, the defender the 49ers are reading.

The vertical stem from Kittle on the Basic pulls Wagner vertically and creates space underneath for the hitch. As soon as he runs with Kittle, the ball goes down to the hitch.

As long as you’re getting a form of zone coverage, all the quarterback needs to do is:

Even with a Buzz look from the Giants here, the Curl/Flat defender widens away from the hitch and it’s a completion before the buzz defender can come down to make a play.

When the Hook/Curl defender attaches to the hitch, the window for the Basic starts to open up. Especially with teams running crossers or clear outs with their #3, that can create a whole lot of space in the middle of the field.

The Bow concept is a simple read with the potential for an explosive play on the Basic. It isolates linebackers and Hook/Curl defenders underneath and gets the ball out of the quarterbacks hands against zone coverage. Since it’s a two-man route concept, other concepts can be tagged onto the other side to add more versatility to the play call.