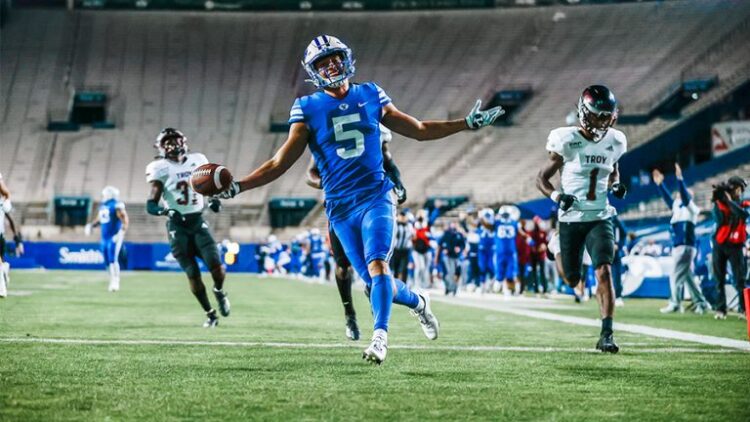 Zach Wilson got all the headlines in 2020 for the BYU Cougars. However, it was wide receiver Dax Milne played a big part in making Wilson look so good. Milne was fourth in the nation in receiving yards at 1,188 after only totaling 354 yards in his first two seasons. Milne doesn’t wow you physically, but finds ways to make at least one huge play a game. While he may never be considered an elite NFL player, he has the chance to carve out a nice role for years to come.

Whenever the Cougars needed a big play, they called Milne’s number. For not having elite speed or size, Milne is great at tracking the ball in the air and keeping his concentration to make the catch. While he did have the good fortune of having Zach Wilson throwing him pinpoint passes, Milne was crafty enough to disengage from cornerbacks at the perfect moment. While defensive backs in the NFL will be more athletic, Milne can still use his quickness and IQ to stretch defenses.

Milne’s footwork is very impressive and will be the reason that he succeeds in the NFL. Whether he’s lined up in the slot or out on the boundary, Milne dices up defensive backs and gains separation. That threat of separation will force defenders to hold Milne and create penalties.

One of the reasons Milne was so successful this past season was the fact that he was utilized on all three levels. Defenses were forced to play him honest and were unable to focus on one aspect of his game. BYU would run a few screens a game for him, but also take several deep shots. That balance is tough to game plan against.

As I watched Milne during the season, I noticed that he was catching a lot of passes with his body and not with his hands. Receiving 101 teaches you to make your quarterback’s job easier by extending your arms to make the catch. You might think this isn’t an issue as long as there aren’t many drops, but that’s not the case. In the NFL, you aren’t given the luxury of the loose coverage you see in college. That means you have to make a lot of contested catches and using your body just won’t work. In addition, there were a few drops over the season on passes Milne should have easily come down with.

As mentioned earlier, BYU threw a good amount of short passes to Milne and asked him to make some plays. However, if you go back and watch, you’ll see he isn’t a guy who made defenders miss. Usually, he was given great blocking by his linemen or he was tackled for a short gain. He possesses the quickness needed for a receiver, but doesn’t have the elusiveness or explosiveness needed to run past defenders.

I fully expect Dax Milne to be a steady slot receiver in the NFL. While I do believe he can play in any system, one where they run a lot of three and four receivers sets will be best for his career. Give him room to work against defenders one-on-one and he’ll become a dynamic third-down option. I really don’t want to compare him to the numerous undersized, scrappy slot receivers the Patriots have had over the past decade, but Milne does seem like he’s cut from that same cloth. You may not win popularity contests with receivers like Milne, but you do win games with those kind of guys.