Zach Wilson film analysis – How he’ll fit in the NFL 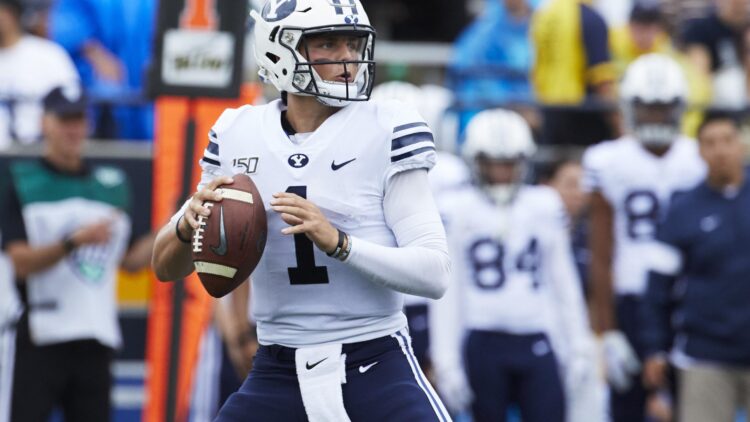 In 12 games this year, Zach Wilson out of BYU threw for 3,692 yards, 33 touchdowns, and just three interceptions. He can throw off platform, puts great touch on deep balls, and has a very quick release. However, those physical tools sometimes got in the way of his growth and development as a passer. Since he has the release and arm strength to get the ball to receivers quickly, he relied on seeing routes break open before throwing it.

It’s hard not to notice Zach Wilson’s ability to get the ball out fast, accurately, and off platform. Mechanically, he keeps a good base and is able to generate power off his back foot. Since his release is so compact and efficient from the upper body, there’s less things that can go wrong along the way.

When you throw in his ability to push the ball downfield or make throws from the opposite hash, you have a prospect with top tier NFL talent. From the moment he begins his throwing motion here to the second it hits the receiver’s hands, the defensive back has gotten only three steps out of their back pedal. With so little time to react, it makes completions easy for Wilson and his receivers.

His deep ball can be a little inconsistent at times, but the strength is absolutely there for Wilson. He has no issue hitting guys over the top for big plays.

Zach Wilson consistently makes back shoulder throws even if he’s off platform and on the move. While on the run for a scramble drill, Wilson locates the defender and recognizes that their back is turned in man coverage. The defender is in the hip of the receiver and in good position to defend the fade. As a result, Wilson knows that if he throws back shoulder, the defensive back won’t have time to react to the ball.

Whenever defenders are stacked on top of the receiver or in good position for the fade, Wilson has the touch and feel for throwing back shoulders.

On the flip side, Wilson also had a number of throws where you can look at them and either say “wow” that was a special throw, or you can say “wow”, his receiver just bailed his ass out. A lot of these throws that end up being completions for Wilson in college, would be incomplete or interceptions in the NFL.

A lot of that comes from pre-determining where he’s going to go with the ball. When you have dudes that can make it look like they’re going against JV players, it’s awesome to give them a shot. However, there was a lack of full field reads at times that took away opportunities for big plays.

BYU is running a pretty basic Sail concept here in the tight red zone with a corner outside, a dig from the backside, and the back in the flats. Off the fake, the corner route is immediately taken away with two defenders bracketing it high and low. The outside linebacker also peels off to take the running back. The next read on this play is the crosser and Wilson never even looks to locate it. Even after evading pressure, he continues to lock onto the corner route and throws up a jump ball that goes incomplete.

Too often, his mind is made up before the snap. BYU ran a lot of isolation concepts that attack defenders downfield, but that doesn’t excuse not coming off of those pre-snap choices faster and attacking the scheme rather than the players. Here, Wilson locks onto his receiver at the top of the screen despite the corner having good position throughout the duration of the route. Meanwhile, the next receiver inside is running a dig route and is rounding into the open space in the zone. Wilson never takes his eyes off the fade up top which is getting washed into the sideline, and the pass goes incomplete.

Inconsistent in Going Through Reads

BYU is now running the Stick concept with two routes underneath and a vertical route to stretch the deep defender. Wilson doesn’t attack the huge void in space in the area where the play is designed to go. Instead, he chooses to take the deep shot when the corner has leverage on top of the receiver. The concept is designed to attack underneath and work the leverage of the inside receiver on the linebacker. The quick hook outside holds the flat defender, the vertical route removes the deep defender, and there’s an easy completion available to the stick route.

Wilson just has the athleticism and arm talent to get away with those missed reads. He’s very accurate and very mobile. He can make you pay if you drop into coverage and he’s fast enough to be involved on read option plays near the goal line or on critical downs.

He’ll move in the pocket and reset his feet, put touch on throws to layer them over defenders, and shows good accuracy that allows for his guys to make plays after the catch. That talent is what will entice GMs.

Zach Wilson has some great tools. The quick release, arm talent, and mobility can help him quickly fit into any system and he’s an incredibly dynamic quarterback. While he does have an over-reliance on those physical tools at times and hasn’t consistently shown the ability to come off his initial reads, his 2020 season was very impressive. He’s shown the ability to throw back shoulders which indicates he can throw with anticipation and read leverage and space. He has to do that at the next level to have consistent success. The big plays will be there, the wow plays will be there, but sometimes, it’s the consistent small plays that you need the most when running an NFL offense. Wilson has the tools, now it’s time to sharpen them at the next level.