2021 NFL Mock Draft: How Did Those Trades Shake Things Up? 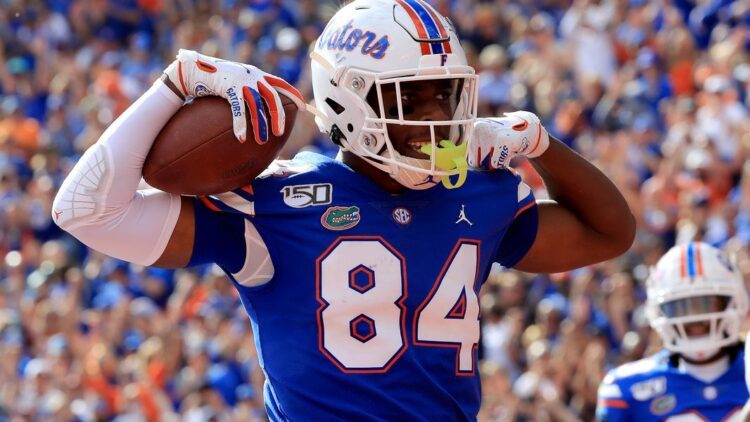 We are back at it again with another 2021 mock draft! The trades between the 49ers, Dolphins, and Eagles have shaken things up, so we felt it was necessary to see just how much things may change at the top of the draft. We also decided to include a second round. As always, if you don’t agree with the picks for your favorite team, it’s because of a deep and personal vendetta we have against them.

Lawrence is the best prospect in about a decade, so this is the easiest pick of them all.

Sam Darnold isn’t the answer in New York and Wilson is a very exciting prospect. He also fits the Mike LaFleur offense perfectly.

You trade up into the top three to draft Superman, not Clark Kent. There is a lot of noise with Mac Jones going here, but I don’t buy it. Fields has all the tools you could ask for.

Tight end might not be a need for the Falcons, but Pitts is more than just a tight end. As Julio Jones gets older, Pitts will take his place as the top receiving option in Atlanta.

The Bengals should be looking for offensive line here. However, Joe Burrow has supposedly been vouching his former teammate at LSU. Typically quarterbacks gets what they want and the Bengals also have a need for a #1 to pair with Tee Higgins.

How can the Dolphins help Tua? Give him Sewell, an absolute badass of a tackle. He might actually play right tackle to protect Tua’s blindside as a left-handed quarterback.

While the team did sign Tyrell Williams and Breshad Perriman in free agency, neither is a top receiver. Smith was the best player in college football in 2020 and would become the cornerstone of that Detroit offense.

The Panthers have seen enough of Teddy Bridgewater and know he’s not their future. Jones might not be the sexy pick here, but he’s a smart quarterback who can get the ball out on time and on target.

Besides Trevor Lawrence, no other quarterback has the ceiling of Lance. Drew Lock isn’t the long-term solution, but he can be a bridge for Lance if he needs to sit for a season.

Pairing Surtain with his former teammate Trevon Diggs would strengthen a weak Dallas secondary. He will be able to start as a rookie and has the potential to be a high-end starter.

Read More: Micah Parsons: A Monster In the Middle

Outside of Leonard Williams, the Giants don’t have much young defensive talent. Parsons’ stock has been slipping, but there’s nothing he can’t do and he would fit nicely next to Blake Martinez.

The Eagles could go a few directions at 12. Cornerback is a big need though and Horn plays big and has great leadership.

Signing Corey Linsley was a good first step towards building a strong offensive line, but the Chargers need more. To some, Slater is the best offensive lineman in the class and would help keep Herbert clean.

At the moment, the Vikings don’t have much stability on the offensive line. They could really use a left tackle of the future. The drop-off from Sewell/Slater to Darrisaw is big, but the Darrisaw still projects to be a solid player.

The Patriots offense lacks explosiveness, which is exactly what Waddle is best at. I worry about his health and size, but in terms of speed, there’s not many faster than the former Alabama receiver.

Some will be turned off by Farley’s back injury that needed surgery, but the talent is too big to pass up on. He might need a “redshirt” year to get stronger and healthier, but he has the tools to be an All-Pro.

Jon Gruden LOVES to run the ball, but most of their offensive line from a year ago won’t be returning. They’ll want to stay strong in the trenches and Vera-Tucker is a guy who can play either guard or tackle.

This is more of a luxury pick for the Dolphins, but they could use another pass rusher. Ogbah is a nice option, but Miami lacks athleticism on the opposite side of him. Let Phillips develop for a season, then watch him become a star.

Slowly, but surely, the Washington Football team is building a solid roster. Owusu-Koramoah plays like a big safety and could add a new dimension to this defense.

Allen Robinson doesn’t seem to want to stay in Chicago for the long haul, so the team has to look at someone to eventually replace him. Bateman is a big and physical receiver who can make plays with the ball in his hands.

The Colts lose Anthony Castonzo to retirement and find his replacement in the athletic, but raw, Cosmi.

After losing Corey Davis, the Titans need a WR2. While Toney might not play like a traditional wide receiver, he can be used in creative ways and has the speed to counteract the physical run game.

Robert Saleh built the defense in San Francisco by investing in the defensive line. They signed Carl Lawson and have Quinnen Williams, but it’ll be tough to pass up on a high upside pass rusher like Rousseau.

Read More: Najee Harris: From The Bay To Bama

When you think of the Steelers, you imagine tough, blue-collar football. Since they lack a running back at the moment, it makes sense to get a powerful runner in Harris.

The Jaguars have invested early draft capital at cornerback, but have a huge need at safety. This is a weak safety group, but Moehrig seems to be the unanimous best free safety.

Myles Garrett is a superstar, but the Browns need to find the Robin to his Batman. Paye is one of the few defensive linemen as athletic as Garrett and would see a lot of one-on-ones.

After losing both edge rushers in free agency, the Ravens will need to address the position via the draft as they look to save money for the impending Lamar Jackson extension. Tyron didn’t play in 2020, but has the prototypical size and ability to play in a 3-4 defense.

Whoever is playing quarterback for the Saints will need weapons. Luckily for them, there’s one right down the road in Baton Rouge who would be a great fit for their offense. Marshall would be a nice WR2 next to Michael Thomas.

Newsome II has been a late riser up boards, but is an incredibly steady presence out on the boundary. As we saw in the NFC Championship Game, the Packers need a new second corner across from Jaire Alexander.

The last piece to the Bills offensive puzzle is developing consistency at running back. Zach Moss and Devin Singletary have been underwhelming as rotational pieces, but Etienne is a guy who can stay on the field on all three downs.

Cutting both of their tackles was a surprise, but the Chiefs did a nice job of addressing the rest of the offensive line in free agency. Jenkins might be better off at right tackle, but is a physical presence who can be relied upon from day one.

Barmore is raw, but would have the fortune of being a rotational piece early in his career on a stacked Buccaneers team. Pairing him and Vita Vea in the middle would haunt offenses and add to an almost unstoppable front 7.