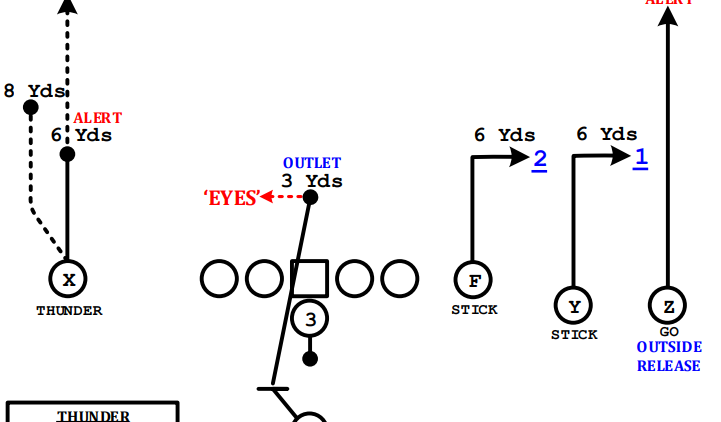 The Disk concept is very similar to the Stick concept and is popular in the Shanahan offense. It is used as a high percentage play that attacks flat and hook defenders in zone coverage. With routes that have a hard break and that work towards the sideline, it can also be effective against man coverage. The defensive stress is the same as Stick, and the differences come down to how the concept and routes are run with an emphasis on running away from defenders into vacated space instead of settling in soft spots of the zone. It is the same concept run slightly differently and with a different name.

The Disk concept wants to get the ball into the hands of receivers outside and let them run after the catch. Disk forces flat and hook defenders to widen and gives leverage to the two receivers to the inside. The concept is read outside-in and is always run to the three-receiver side. Disk entails:

The two stick routes want to fight for an outside release to give the quarterback a window to throw to. Whether it’s zone or man, that leverage to the outside is critical to the success of the concept.

Disk looks to isolate the flat defender and out leverage them to the outside. The vertical from #1 removes any deep player with the opportunity for a hole shot vs. a two-safety look. The stick from #2 is the primary read. That receiver’s goal is to give a good vertical stem and beat the flat defender outside. If it’s a Cover 2 look, the receiver needs to settle before running into the corner in the flats. In Cover 3, if the flat defender flies with the first stick, the stick from the #3 is coming in right behind them and hopefully has leverage on the next defender inside.

For the quarterback, the read is to:

The 49ers here are working the Disk concept against Seattle’s Cover 3 defense. That means the defender lined up over #2 is responsible for the flats. Receivers must get an outside release on their stick routes, even if it means getting washed outside. On an inside release, that takes away the window and brings the defender inside to the second stick route. Here, the flat defender sticks on the middle slot receiver. The stick from the #3 pushes vertical to hold the linebacker and cuts to the open area outside at six yards for the completion.

Now, when the receiver has leverage outside for that first 6-yard stick, the ball comes out immediately for an easy gain.

Disk is an easy defender key read for the quarterback. It gets the ball out fast and provides a simple throw to keep the offense on schedule while attacking the leverage of the defense.