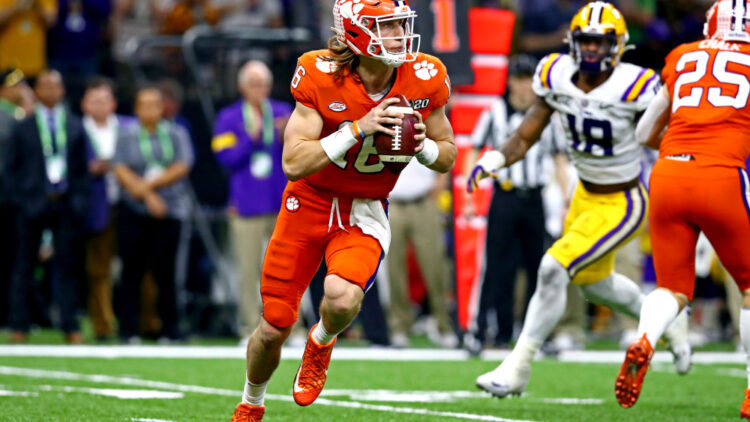 We’ve seen a lot of mock drafts, but now let’s take a look at our definitive (and 100% correct) big board. We broke it up into two parts, but here are our top 50 players in the 2021 NFL draft!

If anyone tells you that Trevor Lawrence isn’t the top prospect, they either are joking with you or genuinely don’t watch football. He has very few weaknesses in his game and should be a top quarterback in the NFL sooner rather than later. The phrase “generational talent” gets thrown around too much, but in this case, it fits.

The buzz Sewell had in the pre-season seems to have quieted a bit due to him opting out of the 2020 season. Make no mistake about it, though, Sewell is a franchise left tackle. He can play in any scheme and has the style of play that will ensure him success over a long period of time.

No receiver was more dominant in 2019 than Ja’Marr Chase — as evidenced by his 20 receiving touchdowns and domination of the SEC. He, like a few others, opted out of the 2020 season. He can do a little bit of everything and will become a top receiver in the league.

Pitts is what you call a unicorn. He’s labeled as a tight end, but plays more like a receiver. I envision him spending a lot of time in the slot and could be a double-digit touchdown guy every season. Simply put, there’s really no one like him in the league and he’s going to be a mismatch nightmare.

While he may not look like your average football player, Devonta Smith is the most technically gifted player in this class (regardless of position). He’ll beat you with precise route running and football IQ and his talents resulted in him being the first receiver to win the Heisman in 20 years.

After an underwhelming (by his standards) 2020 season, Fields took himself out of the running for the number one overall pick. He should be a top-four selection regardless, with the potential to be a franchise quarterback. His mobility and ability to push the ball down the field will make him a dangerous player, but he might need to sit a season and continue his development.

The biggest riser of this past season was unquestionably BYU’s Zach Wilson. Wilson came into the season off of the draft radar and proceeded to lead a high-powered Cougars passing game to their best season in years. It sounds crazy, but he does have some Mahomes in his game with his ability to extend plays while making tough throws off-script.

Slater’s “money” game happened in 2019 when he was the only offensive lineman that year to slow down then Ohio State defender Chase Young. Some worry about his lack of length, but his quickness and strength make him a natural fit anywhere on the line.

In order to play the linebacker position now, you need to be able to do a little bit of everything. That fits right into Parsons’ game. There are some things he needs to develop, but he has the athleticism to be coached up. The sky is the limit for this young man.

When you look up the definition of “man amongst boys”, you should see a picture of Najee Harris in an Alabama jersey. He might lack top-end speed, but he’s a bruising back with soft hands. He is a three-down running back and can handle a heavy workload as a rookie.

While he may not have the flashy stats, Jaylen Waddle was the most explosive college receiver in 2020 when he was healthy. As one of, if not the fastest player in the class, Waddle could see a steady rise up draft boards similar to what former teammate and current Raider Henry Ruggs had last year.

Teams are always attracted to the players with a high ceiling, but there’s a lot of value with guys like Surtain II who have high floors. While he was rarely tested this past season at Alabama, Surtain II is going to be a quality cornerback.

The super athletic, but inexperienced Farley could become a superstar in the right system and with proper coaching. A former wide receiver, Farley opted out of the 2020 season and might not be ready to make an impact as a rookie. However, he has the physical tools required to be an All-Pro shutdown corner.

Lance has a massive arm and impressive speed. Despite this, he only has 318 pass attempts at the FCS level and has some problems with his accuracy. Scouts are split on him, but based on upside alone he’ll be a top ten selection.

At 6’7″, Rousseau is one of the more physically imposing players in the draft. He’s also one of the more raw prospects. Rousseau had 15.5 sacks in his only season of college football. Since it’s tough to project his success based on his limited sample size, he just might be the biggest wild card in the draft.

In terms of pure talent, Phillips is a top 5-10 player. He has the size to go along with smooth athleticism that enables him to live in the offensive backfield. Unfortunately, Phillips has had a number of injuries that may limit his long-term success.

More linebackers in the NFL are playing as big safeties, which perfectly fits Owusu-Koramoah’s game. It’s rare that you can find a linebacker who you feel comfortable with when he’s defending the slot, a tight end, or a running back. Owusu-Koramoah can step in immediately and fill a role on any team.

Possibly the biggest “freak” athlete in the class, Paye’s athleticism never quite matched his production. When you watch his game film, you see a guy who can do just about everything, but who just needs a little more seasoning. In a year without a true top edge talent, Paye will rise up boards based on athletic traits and upside.

Marshall never got a full season to show what he could do as a WR1 in the LSU offense, but he showed enough to prove he can be a good NFL receiver. In my opinion, he’s very similar to his former teammate Justin Jefferson in body type and skill set. Pair him with another dynamic receiver and your passing game will take a big step forwards.

While the NFL might be looking for speed, possession receivers like Bateman will always have a role. He’s built well and has the strength out wide to battle with anyone. He creates separation and creates easy throws for the quarterback.

His father, Joe Horn, had a great run at receiver with the Saints, but Jaycee is a tough-nosed cornerback. He brings the fight to receivers and impressed in 2020 against the nation’s top players in the SEC. It did take him until this year to play well, but his physicality and IQ make him an immediate contributor.

Wyatt Davis was seen as a franchise guard before the season, but didn’t overly impress in 2020 while dealing with injuries. At his best, he’s a nasty guard who can play in any system and excels in protecting the quarterback. Guards aren’t seen as a premium position in the draft, but in terms of talent, Davis is one of the best this year.

There are not many pass rushers with the versatility of Ossai, which makes him a valuable commodity. He’s another ultra-athletic, raw player but can rush from a standing position and drop into coverage if needed. We finally got to see his upside this past year when he played well enough to be named an All-American.

Teams are always looking for mismatch nightmares. 2020 was Toney‘s first real season playing at receiver after playing quarterback in high school and some running back early in his college career. He’s more of a jack of all trades at this point, but is dynamic with the ball in his hands and can legitimately score every time he’s on the field.

He’ll never impress you during a workout, but Dillon Radnuz is a technically sound left tackle. Should you want him to play right tackle, that would work as well. He may have played at the FCS level, but Radunz dominated every week and should be a stable option who can hold down the position for years to come.