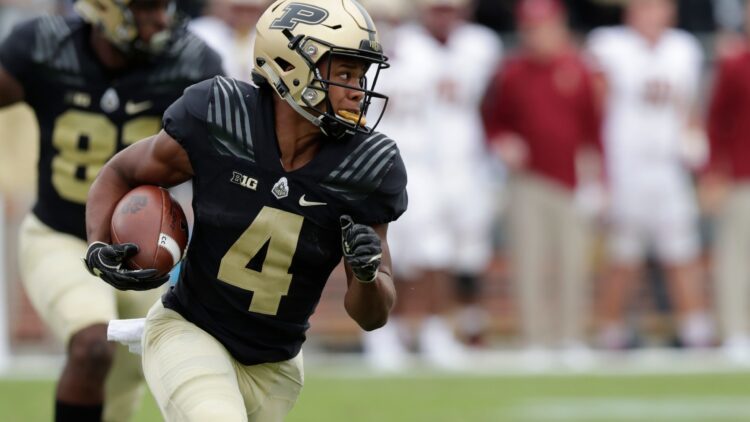 Rondale Moore out of Purdue had himself a Pro Day. He ran a 4.29 40-yard dash, had a 42.5 inch vertical, and has been absolutely electric when he’s on the field. The problem is, he hasn’t been on the field all that much. Since a 2018 season where he had over 1,200 yards, 12 touchdowns, and was named the first true Freshman consensus All-American in Big Ten history, he’s played just seven games in the last two years. He’s been plagued by hamstring and lower body injuries that held him out of all but three contests in 2020.

Rondale Moore is small, but he plays with toughness and isn’t afraid of contact. He might not be winning jump balls, but he attacks the ball in the air and can fight through contact at the catch point. He’s not going to be a guy you split out wide very often, so being able to win inside is important for him to be able to have success in the NFL.

As one might expect though, at 5’7” and 181 pounds, he can get bumped around when he’s in his routes. Any sort of a jam, and it’s game over for Moore. He just doesn’t have the stature to be able to endure a physical corner and still get into his route cleanly. He has to win on speed and with his hands at the line of scrimmage. That hand usage is something that’s still lacking in his game.

When he’s into his route and getting clean releases, he can ball. He understands how to work and attack the leverage of defenders. Against Wisconsin, Moore keys that the slot defender over him has outside leverage. That means that they want to prevent him from getting outside. What that means for Moore is that any outside move will threaten their leverage and force the defender to react. Moore pushes an outside stem, and uses efficient footwork to burst back inside on a slant.

Attacking the leverage of the defender and creating space for himself is one of his best qualities. Wisconsin is again giving him an outside shade.

Moore has a seam and needs to create space between himself and the safety while also winning on his route to give his quarterback a bigger window. He slides outside to widen his man and then releases vertically to win on his route.

The ability to start and stop with his low center of gravity and explosive lateral quickness is elite. He does a good job of reducing wasted movements when getting into his routes.

Whether it’s in the short game or working downfield, Moore always works to widen defenders to create space for himself. He uses footwork and his explosiveness to get up onto defenders toes and get them turned around. Here, Moore works up onto the safety for a post.

When he starts to close distance, he implements a rocker step which rocks off the instep of his inside foot to create a violent hip shift away from his route-side space. He then plants on his outside foot and bursts to the post while turning the safety around.

Once Rondale Moore has the ball in his hands, he becomes incredibly dynamic. He’s runs with power and has good contact balance which makes him a great guy to get the ball to on screens and in the open field.

Where he does struggle at times, though, is stringing moves together. Without creating moves off his basic releases and route stems, he can become predictable and defenders can start to key off of his breaks to jump routes. On his dig routes in particular, he does a foot fire break to get his feet underneath him and then burst into the middle of the field. That is good if he’s working against a trailing defender, but in zone, it allows defenders to read and jump his route.

After running his dig a few times against TCU, the defense now knows his foot chop at the top of his route is indicating he’ll be breaking in.

As soon as he starts that foot fire, TCU jumps his route to protect the inside and take away the throwing window.

Rondale Moore has a lot of tools that are going to be enticing for NFL teams. He’s not a traditional receiver, though, and skews a little bit more towards being a gadget guy. The health is a concern, but in an offense that implements a lot of motion and works slots on crossers, deep posts, and quick screens, he could be absolutely lethal. He’s a great option for the jet sweep, and every time he touches the ball, he has the potential to go the distance.