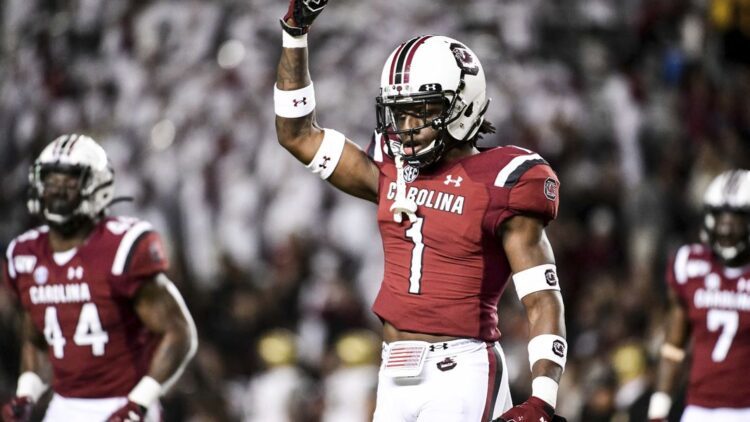 No defensive back played as well as South Carolina’s Jaycee Horn in 2020. If he didn’t opt out midseason after head coach Will Muschamp was fired, he would have been an unanimous All-American. His father, former WR Joe Horn, played for the Saints and is most remembered for his famous cell phone celebration after scoring a touchdown against the New York Giants. Jaycee has the same swagger and confidence as his father and it showed up every Saturday. As he continues to impress in the pre-draft process, Horn is rising up boards and is becoming one of the top defensive prospects in the 2021 draft.

Very rarely can you succeed at the cornerback position without bringing the fight to receivers. Horn is excellent at extending his arms at the line of scrimmage while staying on balance and re-routing or slowing down the receiver. You’ll also see Horn all over the receiver and consistently batting the ball away at the catch point. While this did get him into trouble on occasion, this physical mentality is something you can’t teach. Either you have it or you don’t. Horn is one of the most physical and gritty defensive backs I’ve ever seen at the college level.

I’m not a guy who puts a lot of stock into Pro Days, but when the Pro Day confirms what the film shows about a player, then I take note. At 6 feet and 205 pounds, Horn ran a 4.39 40, had a 41.5 inch vertical jump, and a broad jump of over 11 feet. All elite measurables at his size. We knew he was strong enough to battle bigger receivers, but we can now confirm he’s speedy enough to run with the smaller receivers too.

Horn projects best out on the boundary, but there were times he played in the slot and succeeded as well. A true lockdown defensive back can play anywhere in the secondary and shadow the opposition’s top threat. Horn showed time and time again that he could do this. In 2020, he allowed just a 33% completion percentage which was best in the SEC. He knows what moves or routes receivers want to run and because of his athleticism, he’s able to beat them to the punch.

Read More: 2021 NFL Mock Draft: How Did Those Trades Shake Things Up?

Overly Aggressive Which Leads To Penalties

As mentioned earlier, Horn is an aggressive player. This aggression, however, can get him into a lot of trouble with holding penalties. Since he wants to get his hands on receivers in order to slow them down, he will get called on occasion with obvious penalties. Playing defensive back in the NFL is already hard, so if he is having these problems now, then you can expect him to have these problems early in his career.

This is a continuation from him being grabby in coverage, but Horn tends to jump on intermediate routes. Most of the time he guessed right and made the play, but there were times where receivers were able to shake free. This mostly happened in man coverage and is something he needs to continue to work on.

Most see Alabama’s Patrick Surtain II and Virginia Tech’s Caleb Farley as the top two cornerbacks in the 2021 draft, but Horn is right on par with those guys. Horn did develop slower than the other two, but he has all the tools needed to be elite. If Surtain is the safest option and Farley has the highest ceiling, then Horn falls right in between. He’s been on a steady rise since the start of the 2020 season and there is a solid chance he is a top 15 pick. Heck, with how fast his stock is rising, don’t be shocked if he goes in the top 10 or 12.