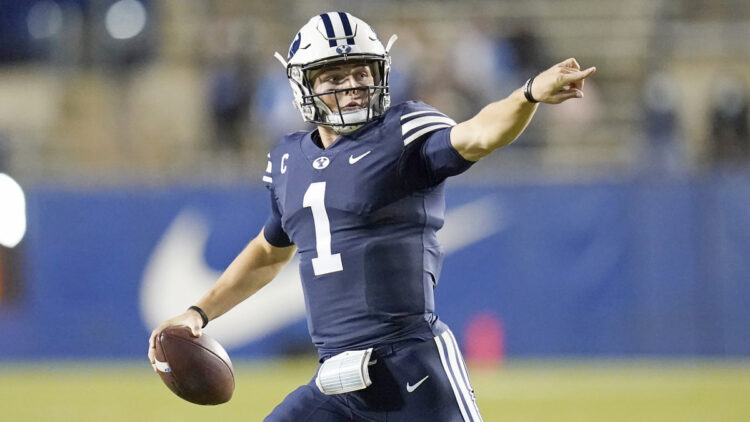 Another week, another mock draft. This won’t be our last one, but with more information being released about each team’s specific needs, it felt like a good time to do another mock. We are less than two weeks away until the draft, so let the fun begin!

READ MORE: Trevor Lawrence- The Prince That Was Promised

Sam Darnold is gone and the Jets have zeroed in on Wilson as their franchise quarterback. There’s a good chance he struggles early, but the upside is too tempting.

Before you 49ers fans get mad at me for this, I am one of you. As a fan, I would hate this pick. However, it’s what every major national draft analyst is reporting now. It seems like a possible smoke screen, but sometimes where there’s smoke, there’s fire.

Can the Patriots win with Cam Newton? Maybe, but Belichick wants Super Bowls. Because of this, he’ll look to trade up and acquire a quarterback who can do it all. Let Fields sit for a season, then push all the chips in for a championship run the following year.

The Bengals need to resist the temptation of a pass catcher and draft the best offensive lineman on the board. Sewell is a Hall of Fame level talent at left tackle and could be exactly what Burrow needs to stay off of the ground.

Is tight end a need? No, but Pitts is so much more than a tight end. He’s the highest-rated pass catcher this year and can line up anywhere. The Dolphins could run a lot of two-tight end sets with him and Gesicki, who is more of a slot receiver than tight end anyways.

The Lions need talent everywhere. Chase is the best player available and just happens to fill a need at receiver.

After trading for Darnold, the Panthers don’t have to worry about making a move for a quarterback this year. They do need to strengthen up their offensive line and Slater is a versatile option.

I don’t know who needs to hear this, but Drew Lock isn’t the future. The Broncos should see Lock as a short-term option and go with Lance who has as much upside as any player in this draft.

Jerry Jones is infatuated with Kyle Pitts, but the Cowboys need defense. Surtain II fills a need at corner across from Trevon Diggs which gives the Cowboys a pair of young corners to build their secondary around.

READ MORE: Micah Parsons- A Monster In The Middle

At the end of the day, the Giants need a defensive playmaker. Leonard Williams blossomed as a pass rusher and they did a nice job of strengthening the secondary the past two years. They need a linebacker, though, and Parsons is a do-it-all player that would make an impact right off the bat.

Devonta Smith might be the more polished player, but Waddle has the upside to be a Tyreek Hill-type player. With Jalen Hurts as their quarterback, I assume that the Eagle will want to run more quick routes which would give Waddle plenty of YAC opportunities.

Since the Chargers don’t need help at just one offensive line position, it makes sense for them to want a versatile player like Vera-Tucker. Personally, I think he’s better off at guard, but he could play tackle if needed.

At the moment, the Vikings presumed starting left tackle is Rashod Hill. Yeah, that’s not going to work. Darrisaw is a safe option at left tackle who’ll start at the position for the next decade.

After a big trade down that sees them set up nicely for the future, the Falcons need to address the defense. No defender has the upside of Phillips. Assuming he’s fully healthy, he should be a double-digit sack guy for the next few seasons.

No player’s stock has gone up more over the past month than Horn. In fact, there’s a chance he won’t be here at 16 and could be the first defender taken. However, in this case, the Cardinals get their Patrick Peterson replacement and a guy who’ll elevate an improving defense.

The Titans lost three of their top five receivers this offseason. If a guy like Smith falls past 15, you can expect a few WR needy teams to be aggressive in trading up for him. Smith and A.J. Brown would form an elite duo in Nashville.

Robert Hunt played pretty well at right tackle last year, but his natural position is guard. By drafting a stable right tackle in Jenkins, the Dolphins offensive line as a whole will take a positive step in the right direction.

I’ve consistently mocked Owusu-Koramoah to Washington and will continue to do so because it makes so much sense. The Football Team are a rangy linebacker away from becoming an elite defense.

The Bears should have their pick of receiver here. Allen Robinson is one of the league’s best, but doesn’t seem committed to Chicago for the long haul. Bateman would be an excellent replacement.

As a team with very few needs, the Ravens should look to move up and go for an impact player. Right now, they are lacking speed on the edge and Ojulari has the juice to rush the passer.

After seeing a mass exodus on the offensive line, the Raiders will need to find a new tackle. Based on their recent draft history, they go for players from big-named schools with plenty of experience. Cosmi checks those boxes and has the upside to play on either side of the line.

We saw the Jets get their high upside quarterback at number two overall, so now it’s time to find that equivalent for their defense. Paye is the best pound-for-pound athlete in this year’s class, but never quite put it all together at Michigan. He had flashes of brilliance and with proper coaching he could become a star.

With Alejandro Villanueva still unsigned, the Steelers don’t have a stable tackle on either side. Radunz isn’t flashy, but he’s consistent and has the strength to play left tackle.

Barmore is a boom or bust prospect. For the first half of the season, he looked out of place and slow. However, down the stretch he was dominant against the run and pass.

Slotting an exact position for Collins is tough because he can play at either edge or as a stand-up linebacker. On the Browns, he could do both. The signing of Jadeveon Clowney shouldn’t change the need for a pass rusher for the Browns as they also need a three-down linebacker who can drop into coverage.

READ MORE: Gregory Rousseau- Rock You Like A Hurricane

Not many teams are better drafters than the Colts which is why we should see them take the best player available here. Rousseau is raw, but he had 15.5 sacks in his only college season and has incredible length.

The Saints offense in 2021 will look much different than the offense we’ve seen the past decade. Regardless of the quarterback, they can’t rely on that person to elevate the talent around them. Instead, they need to find elite playmakers, like Moore, who can provide a much-needed home run threat.

This is a dream scenario for the Packers. Farley’s stock is going down due to his back injury, but the Packers can be patient with him. From a talent perspective, he has the tools to be an All-Pro. Having him as CB2 opposite of Jaire Alexander is just unfair.

After making the move to trade out of the fourth overall pick, the Falcons will have plenty of ammo to trade back into the first. Moehrig is an immediate starter at safety and can help improve one of the worst defenses in the league in 2020.

The Chiefs are one of the toughest teams to project because they like going for luxury picks like Edwards-Helaire rather than true needs like linebacker. However, I see Bolton has a vocal leader at the second level for a team that hasn’t had exceptional linebacker play in a few years.

No roster is as deep as the Bucs at the moment, so it makes sense for them to trade down and acquire assets in the future. The Eagles are in a great spot to trade up because of a few trades they’ve made this offseason. Outside of Darius Slay, their secondary is poor. Newsome has been a riser as of late and projects as a steady corner who can produce as a rookie.