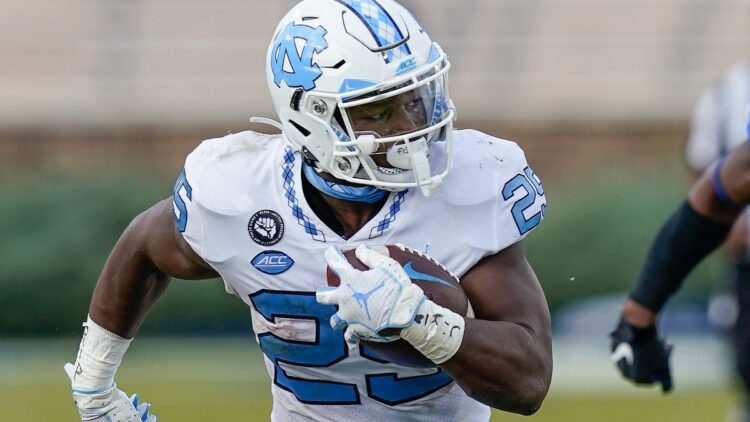 Javonte Williams brought great physicality and burst to the backfield in North Carolina. In his Junior year, he had over 1,000 rushing yards, 19 touchdowns, and 7.3 yards per carry. He looked like a natural pass catcher out of the backfield with 305 yards through the air. Williams is climbing up draft boards and will likely be a day two pick after Najee Harris and Travis Etienne.

When watching Javonte Williams, the contact balance and power jumps off the film. He consistently falls forward and finds ways to stay up through contact. He’s a problem for guys on the edge and once he gets to the second level, defenders consistently had problems trying to tackle him. The ability to continue his leg churn and fight through contact is his most elite trait and is what pushes him to the top of the running back class this year.

Javonte Williams is a straight-up violent runner. You can see that in the way he finishes runs, but he pairs that violence with patience. Once he decides to go, he has a nice change of gear to get to the next level. He might not run away from guys, but he has more than enough speed to hit creases and accelerate for explosive gains.

At UNC, he showed the ability to fit in both power and zone scheme runs. The Tar Heels ran counter looks, but also had a steady dose of outside zone. That outside zone scheme gave him the opportunity to work cutbacks, utilize his burst, and show his power against linebackers and safeties. The goal on outside zone is to stress the edges of the defense horizontally. Usually, though, getting outside on outside zone is pretty rare. Defenders are fast enough and use leverage on the edge to force things back inside. However, it still creates flow from the linebackers when backs press and take a track to get outside. That flow then opens up lanes behind the play.

That’s what happens here as Williams pushes play-side and reads that his tackle isn’t going to seal the edge for him. That shifts his eyes one gap inside. Again, his lineman hasn’t won outside leverage and is working to drive the defensive tackle out. Williams reads down the line until he sees a gap where leverage has been won. He then quickly hits the lane off of the backside guard and tackle. By pressing, he’s forced linebackers to commit play-side which opens up the huge gap down the hash.

While those plays don’t always hit for huge gains, Williams consistently showed great vision and understanding of the zone blocking scheme. If things are walled off play-side, that usually means there is space opening up on cutbacks.

The patience and burst are especially evident on power scheme runs where he can ride linemen until gaps appear. UNC ran some counter schemes with both their center and tackle pulling. The center kicks out and the tackle wraps through the hole.

That gives Williams two blockers and the ability to read leverage of defenders as he rides the tackle through the hole. Once Williams sees space, he attacks it with urgency. The acceleration through holes and his gear change from 75% to 100% is special.

Even on those power schemes, his eyes and vision help him attack the flow of defenses. Normally, there’s not supposed to be cutback lanes on a lot of power schemes because of the way offensive linemen have to hinge and seal on the backside to prevent penetration.

Here, though, Williams sees the defense collapse on the play-side and the defensive end responsible for pinning in the cutback gets washed and pancaked. That opens up a cutback lane backside and Williams quickly gets his feet underneath him and gets up-field.

His vision in all blocking schemes and his power and acceleration make him one of the most fun backs to watch in the 2021 draft. He doesn’t go down easy and can attack space quickly enough to make defenses pay if they aren’t gap sound.

He’s usually not going to run away from people, but with his acceleration and the right scheme to keep defenses honest, he has the speed to turn the corner and gain yards.

Tendency to Bounce Outside

However, sometimes, there’s an over eagerness to get outside. He’s done a pretty good job of being a disciplined runner and staying within the scheme and design, but because of his trust in his acceleration and his eyes attaching to green grass, that grass can sometimes lead him into unblocked guys outside of the scheme. UNC is running a generic guard and tackle counter here and the guard misses the kickout block. Now, it’s on the tackle to clean up and remove that defender. However, Williams’ track is a little too far outside now and he quickly tries to bounce it outside. If he was staying tighter to the tackle, there’s a lane that opens up that would have immediately gotten him up onto the second level where the play is designed to hit.

As the level of competition rose, Williams struggled more to get the edge and bounce things outside. Those issues will only present themselves more at the next level.

Lastly, as a pass catcher, UNC didn’t ask him to do a whole lot. However, he looked like a natural hands catcher and was consistent bringing the ball in. He showed no issues and seems like he’ll be capable at the next level.

Javonte Williams brings power and burst to the backfield. He’s shown the ability to fit in and read multiple blocking schemes and while he may not have home run speed, he does have big play speed. The contact balance is elite and as a day two back, he brings a lot to the table as a dynamic and powerful player that immediately has the ability to improve and bring explosive potential to the backfield.