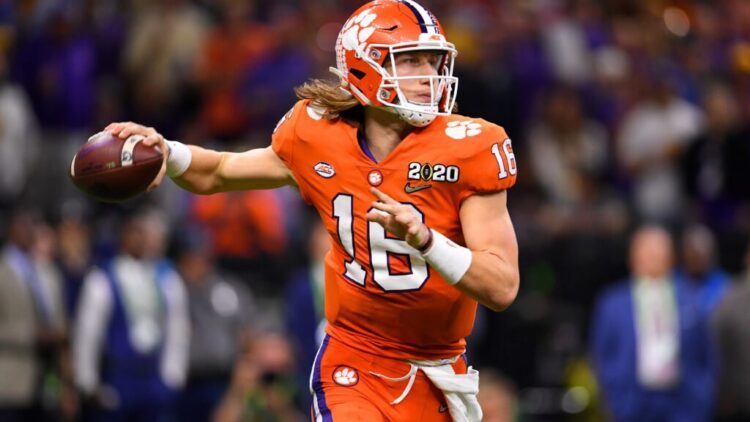 This mock comes from our podcast, the Weekly Spiral. We did picks 1-16 on our April 21st show and 17-32 on April 28th. We also rotated picks between the three of us with Durgin picking first, Cyrus picking second, and Casey picking third. Now that it’s explained, enjoy (or hate) our mock draft!

READ MORE: Trevor Lawrence- The Prince That Was Promised

We may not agree that Wilson is the second-best quarterback prospect, but all signs point to this. The Jets need a face of the franchise and haven’t had a true star quarterback since Joe Namath. No pressure Zach, you just have to overcome decades of mediocre play…

It’s weird how we think we know where the 49ers will go here, but at the same time have no idea. We all believe that Fields is the second-best quarterback in this draft and despite reports of the team not wanting him, it just makes too much sense for the 49ers to screw this up.

Julio Jones seems to be on the way out and if the Falcons do keep this pick, they’ll target the best pass catcher available. Pitts is listed as a tight end, but plays more like a receiver and should be an elite playmaker in the near future.

Ignore the “Bengals are picking a wide receiver” noise and go with common sense. They need to protect Joe Burrow and Sewell is the best offensive lineman available.

In order to find out if Tua really is your guy, you have to get him some help. Chase is a monster and dominated the SEC at 19 years old.

This is probably the first surprise, but the Lions need talent. Waddle is similar to Tyreek Hill and gives the team a cornerstone offensive player to build around.

After the Panthers traded for Sam Darnold, the pick became clear. Either target the offensive line or trade down. Some think Slater is the top lineman in this class. He should be able to step in at left tackle right away.

Drew Lock isn’t the future. Even more, he’s not the present, either. While Trey Lance might be more talented, he is very similar to Lock. Jones would be ready to play right away. Given the weapons that Denver has outside with Jeudy, Sutton, and Fant, just get a guy that can get it in their hands and let them go to work. Mac Jones may not be the most exciting, but he allows others to be exciting.

The Cowboys are in a prime spot to draft the best defensive player available in the draft at 10. Surtain II doesn’t have the high ceiling, but should be a consistent pro for the next decade. Expect him to start right away and be a multiple-time Pro Bowler in the coming years.

With Daniel Jones as your starting quarterback, you’ll need all of the weapons you can get. We can all agree that the team has done a good job of finding receivers, but Smith is a pro-ready route-runner who should be a reliable option for years to come.

We are all firm believers that key players should have the personality and on-field play similar to their city. If there’s one player who fits the mold of a blue-collared town like Philly, it’s Jaycee Horn. He’s a physical alpha male at corner who brings the fight on every play.

Will the Chargers do the right thing and try to protect Justin Herbert? History says they won’t, but we are optimistic things will change. Vera-Tucker is a versatile offensive lineman who can start at either guard spot or left tackle next year.

Danielle Hunter is one of the league’s best pass rushers, but he has no help on the other side of the defensive line. Paye is the best pound-for-pound athlete in this class and should do well playing second fiddle.

Bill Belichick does it again. There’s no quarterback (Lawrence included) with the upside of Lance, but he needs a lot of work. The Patriots can feel confident with Cam Newton as their starter in 2021 and then let Lance take over in 2022.

Injuries might force Farley to the end of the first round, but his talent is undeniable. He has the tools to be an elite cornerback and this would be a risk, but the Cardinals need a stud to replace Patrick Peterson.

Jon Gruden wants to run the football so it was a surprise to see their offensive line lose two starters without bringing in any replacements. Darrisaw can play either tackle spot and would provide the stability the team desperately needs.

Taking a big swing on an injury prone player is risky. However, Brian Flores can put this defense over the top with a player like Phillips. Talent-wise, he’s the best defensive lineman, but will his medicals do him any favors?

Washington is on the verge of building the best defense in the NFL, but is a player or two away. Getting a rangy linebacker who excels against the pass like Owusu-Koramoah is exactly what this defense needs.

Chicago is likely to be one of the teams left without a quarterback after the draft so what they need to do is support whoever is throwing the ball for them next season. Allen Robinson doesn’t want to be there for the long haul and Bateman is a physical receiver who can blossom into a WR1.

Long-time left tackle Anthony Castonzo retired and the Colts find his replacement in the draft. Jenkins is a mauler who dominates in the run game and has the skill to play either tackle spot.

Outside of AJ Brown, the Titans are in desperate need of pass-catchers who can make big plays. Toney is more of a gadget player than a pure receiver, but he can be exciting in an offense where he’s the third option.

This Jet defense is a major work in progress and new head coach Robert Saleh knows that. Drafting a corner like Newsome gives them stability at the position gives and them an answer for the present and the future.

With Alejandro Villanueva expected to leave in free agency and Maurkice Pouncey retiring, the Steelers have a few holes on the offensive line. Humphrey is seen as the top center with the injury concerns to Alabama’s Landon Dickerson and could step in immediately and help out in the interior of that line.

Jacksonville is nowhere near ready to compete for a Super Bowl, so it’s all about bringing in quality players. Moehrig is seen as the best safety in this class and also happens to fill a need. A secondary with Moehrig, CJ Henderson, and Shaquill Griffin should be solid for the future.

Parsons is a guy with top-five talent, but linebackers aren’t usually drafted early and there are concerns about his maturity. The Browns can take a chance on his upside to become an All-Pro and an instant contributor.

Outside of Hollywood Brown, the Ravens lack a reliable WR2. Marshall is a smooth operator from the slot and can work you on all three levels. Also, at 6’3″, he’s a big target for Lamar Jackson to throw too.

The Saints are a tough team to mock because they could go in a few directions. One need they do have is linebacker. Outside of Demario Davis, they have little depth. The team traded for Kwon Alexander, but he tore his achilles and was then released. Davis is a rangy linebacker who can grow into a high-level player.

After David Bakhtiari got injured, the Packers offensive line was not the same. Billy Turner is a solid right tackle, but Cosmi can eventually replace him and play as a swing tackle as a rookie. If we learned anything from last year, it’s that the Packers like thinking two years ahead.

This is a gamble, but the payout might be a jackpot. Oweh ran a blistering 4.36 40 time at 252 pounds. That’s athleticism you just can’t teach. The Bills defensive line is getting old Oweh would immediately a spark.

There’s no way that the Ravens won’t add a pass rusher in some capacity this weekend. Ojulari is raw but has the juice needed to get pressure on the quarterback. Start him as a pass rush specialist while his body continues to get stronger.

It’s rare that any team returns every starter from the previous year and it’s basically impossible that the defending Super Bowl champion brings back every starter. In the case that the Buccaneers keep this pick, they’ll look for a developmental player. Rousseau has the production, but still needs some technical refinement before you can expect him to produce.