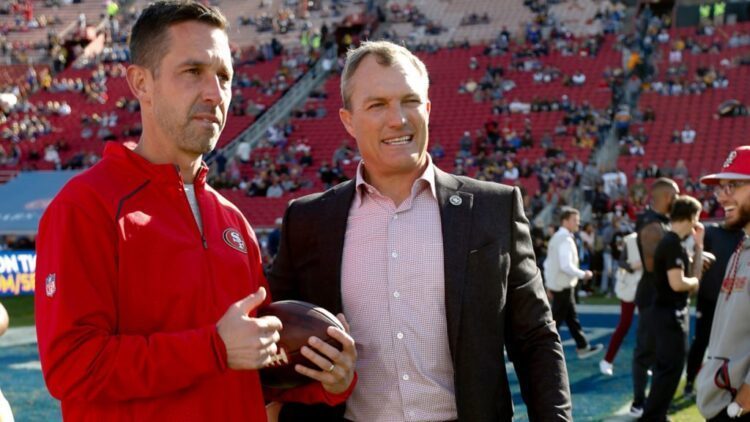 We are so close to finally putting all the quarterback talk to rest! After the 49ers made the massive trade up to pick third overall in the 2021 draft, it has been a non-stop debate over the teams draft plans. We really don’t have any idea yet who they’ll pick in the first round, but it will surely upset some people.

Look, no 49er fan wants this to happen. It’s about we wake up and face the truth. If EVERY national football media member is saying the pick will be Jones, then either the 49ers front office is orchestrating one of the best lies in human history or the pick is actually going to be Jones. As someone who’s already gone through all seven stages of grief and accepted the pick, let’s start with the positives. Jones is ready to step in and play now. He throws with great anticipation and touch and is by far the safest option (outside of Lawrence) in this draft. I don’t see a way in which he becomes a total bust like a Jamarcus Russell, but he will never live up to his third overall selection. Can you win a Super Bowl with him? Absolutely, but you need the entire team around him to play at a high level. The Kirk Cousins comparison is annoying, but it’s very accurate. At best, he becomes Matt Ryan, but that’s a pipe dream in my eyes.

* I think it’s likely that the 49ers will move back into the first round. They have a ton of late-round picks that they could pair with the 43rd overall to move into the 26-32 range. Outside of corner, nothing is a glaring need. We’ve seen the 49ers be aggressive with trading in the draft and I would expect them to go all-in on a player who would help them this season. Who would they target in a move-up scenario? No idea. Could be for a corner like Caleb Farley, a running back who’ve they’ve been in constant contact with like Najee Harris, or one of the plethora of solid wide receivers. Whoever it is, expect some fireworks.

The 49ers are a Jason Verrett injury (something likely to happen if we are being honest) away from having a bad secondary. Emmanuel Moseley is a nice player and so is K’Waun Williams, but Williams will be 30 next year and is coming off an injury-riddled season. In reality, the team should draft at least two cornerbacks and get some youth at that position. Eric Stokes has all the athletic tools you want and performed exceptionally well in his three years in Athens. However, he needs some technical work and struggled to locate the ball at times. Fortunately, the 49ers can continue to develop him. At 6’1″, he would be the tallest of the top four corners on the team, which is something needed when you go against DK Metcalf and DeAndre Hopkins twice.

Alex Mack was one hell of a signing for the 49ers, but he is 35 years old. Daniel Brunkskill is the biggest bargain on the team in terms of contract value, but is still an average starter (except when he’s playing against Aaron Donald). Even if both play at a high level this year, the interior offensive line needs some depth. Kendrick Green might be the best zone blocking interior offensive lineman in this draft and could play at either guard or tackle. I would pencil him in as the backup at center and guard and expect him to start by year two or three. One reason in particular that makes me believe that Shanahan will really like him is the fact he’s a good run blocker. We’ve seen a trend of the coaching staff prefering that trait and planning to coach them up on the pass blocking.

Austin Watkins is by far my favorite mid-round receiver. I first noticed him at the Senior Bowl, where he displayed nice route running and consistently got open. After doing a deeper dive into his game, he’s ready to step in as a rookie and play meaningful snaps. He’s physical at the point of attack and can pick up yards after the catch. I won’t call him a speedster, but he’s quick enough to disengage from defensive backs and outrun them after he breaks a tackle. In a perfect world, Jalen Hurd will step in and become WR3, but that might be asking too much. Between Hurd, Watkins, Travis Benjamin, Richie James, and Mohamed Sanu, I think you can find a dependable option that could play close to 50% of the snaps.

Ross Dwelley and Charlie Woerner are decent options at tight end, but neither can provide the upside that McKitty can. When you watch him play, you see a strong blocker who flashes moments of being a good receiver. He just never had the stats to back up his skill. The 49ers took a chance in the fifth round a few years ago on a tight end that had that same story and I would say he worked out just fine. We’ve also seen the team routinely carry four tight ends on the 53 man roster the past few years. Despite having the game’s best tight end in George Kittle, they’ve been aggressive in looking for a TE2.

Read More: The Little Things George Kittle Does to Improve the 49ers Offense

The reasons for selecting Watkins in the fourth round also apply for Newsome here. However, Newsome is more of a pure slot receiver who has experience returning kicks. Let’s assume Richie James Jr., the leader in the clubhouse for the WR3 and punt returner spot at the moment, comes back next season. He’s on the last year of his rookie deal and a guy like Newsome can do a lot of the same things. The wide receiver battle will be exciting to watch this offseason as the team should bring in another solid veteran to compete.

While Trent Williams and Mike McGlinchey are the clear-cut starters at tackle, there are no guarantees as to who the backups are. Justin Skule has inconsistent the last two years and Shon Coleman has yet to play a snap for the team in his two years. Daniel Brunskill has stepped in admirably at tackle in the past, but is settling in as a guard. Moore is an athletic tackle who has 32 starts in his career. Even though he has as much experience as any player in the draft, he needs work from a technical standpoint. He could blossom into a swing tackle role in the future.

Remember what I said about the 49ers’ lack of depth at corner? I have them going corner in the second round, but they should double up at the position. Lenoir has plenty of experience at corner and could play on the outside, the slot, or even at safety if need be. He might not have elite size, but he plays very physically and will never back down from a challenge. The main reason he gets pushed down the board is his overall lack of athleticism. As a result, his ceiling isn’t very high. He reminds me of current 49er Emmanuel Moseley. In the fifth round, drafting a possible developmental starter is a win.

Demeco Ryans will be able to get his hands on another linebacker project in the late rounds. Obviously, Fred Warner and Dre Greenlaw will be starting, but the team will carry at least two more linebackers on the 53 man roster. Azeez Al-Shaair will likely be one of those guys. The other spot comes down to special teams ability and upside. At moments, Hines makes flashy plays and has the size and athleticism to play in the NFL. On other plays, he was far too inconsistent and didn’t show much IQ as he would get caught taking a wrong step or misdiagnosing a play. Ryans has developed Warner and Greenlaw from mid-round picks to high-end NFL starters and could see similar potential in Hines.

The running back and edge group are often mocked to the 49ers in the mid to late rounds. While I wouldn’t be shocked at all if they addressed those positions, there is no clear spot on the roster for them. The top three running backs are clear and JaMycal Hasty has showed plenty of upside for the team to keep him as the fourth option. After signing Arden Key and Samson Ebukam, there are six edge rushers (not including Dee Ford) who can be solid producers. The team might look for a developmental guy, but it’s not as likely as most believe.