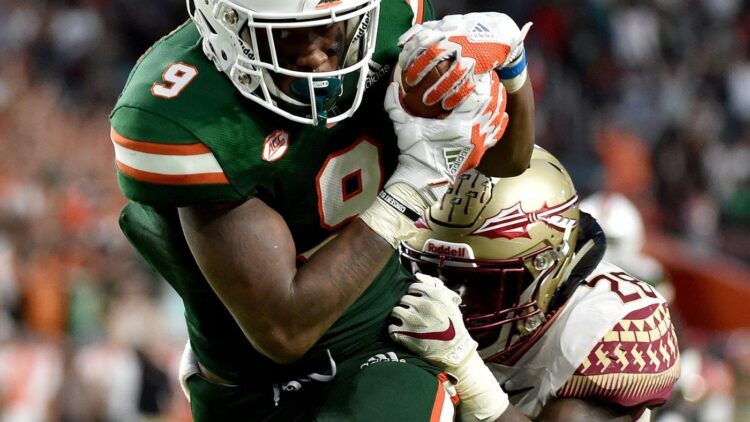 Meet the other tight end from the state of Florida. Brevin Jordan out of Miami might not have had the eye-popping stats, but he was a consistent contributor throughout his three years in college. Miami flexed him all over the field and he projects well as a move tight end in the NFL with the ability to work in-line, in the slot, outside, and as a sniffer in the backfield. He’s not a blazer with a 4.69 40 time, but he uses good route technique and is a tenacious blocker wherever he’s lined up.

Brevin Jordan brings intensity and competitiveness to his blocking assignments. Regardless of whether he’s working on a defensive end, linebacker, or corner, he blocks with an edge. If he gets a good fit, defenders really struggle to shed and disengage. He could use a little bit more strength in his lower body at times, but he does a good job keeping his base and does a fantastic job taking on some more difficult blocks in space.

Especially for larger guys, blocking outside on the perimeter can be a challenge when facing shiftier defensive backs. Jordan was a plus player when asked to block on bubbles and did a really impressive job not only attaching onto those blocks, but finding ways to sustain and finish those blocks as well. He consistently got good fits with inside hand position and fought to stay low and in front of his guy.

He was used much less frequently as an in-line guy for Miami. They asked him mostly to work combos and down-blocks so that he could climb and get to the second level.

He sometimes struggled to move defensive ends and linemen, but was a clear winner on second-level defenders via kick out blocks or when he worked off of combos.

Where he did have a couple bad reps, was in pass protection. Here, Miami is running a full line slide to the right with the intention of leaving their running back on the end man on the line of scrimmage to the left. However, Jordan doesn’t slide inside to protect against the linebacker shooting in off the slide. He hinges to protect against the end, but leaves too much space and a gap in protection. Knowing that the running back is coming over to help take the end, Jordan needs to take away the inside rush first and confirm that the linebacker is dropping before he kicks out to take the end. He realizes his mistake too late and is caught in no-mans-land which results in the pass rush getting home.

Use in Play-Action Scheme

Despite some issues in pass pro, Jordan’s ability blocking tight to the formation allows him to be used off play-action on crunch blocks to the flat to get him on the move and in space. To really be able to perform at the next level, he has to continue to grow in his ability to block and hold up when in-line.

Brevin Jordan doesn’t need to just be schemed open though. He doesn’t have fantastic straight-line speed and can struggle with contested catches, but he does utilize pretty polished route running to win and create separation for himself. That is incredibly valuable when he’s split out at the slot and away from the formation.

One of the best parts of his game is understanding the coverage and defense he’s facing and using route technique to make sure he ends up in open space. UNC is giving a two-high shell with a lock call to the top of the screen by the corner. That defense essentially isolates Brevin Jordan on the safety. Miami has a Smash concept dialed up. The hook and corner to the bottom of the screen occupies the field safety and Jordan knows that all he has to do is widen the boundary safety and win inside leverage after clearing the linebacker. At the top of his route, Jordan begins to lean and stem the safety outside until they turn their hips. As soon as those hips turn, Jordan plants, snaps his head, and bursts to the middle of the field where he’s cleared the linebacker and is wide open with inside leverage. He’s able to break the tackle of the safety, and there’s nobody else home to stop him from scoring.

Jordan has efficient footwork, uses his hands in his routes well, and knows how to attack defenders. He’s especially deadly on seams and posts where he can win leverage and use his route stems to create more space for himself.

Issues with Contested Catches and Drops

He’s got size and athleticism, but that didn’t show up on contested catches. He had some drop problems and routinely lost tight window throws where he has to box out and use his frame to win the ball. That’s his biggest hurdle as a pure receiver, because the football IQ and understanding are definitely there.

He isn’t a confident hands catcher. He has displayed the ability to attack the ball away from his frame at times, but wasn’t consistent in that departmentt. He’d often let balls get into his chest and allow for defenders to close space.

He’s not always going to run away from or through people, but he does display some athleticism and isn’t a liability in space. If you give him room to work with, he’s good enough to take the yards and make someone miss on occasion.

Brevin Jordan has the route running polish to be a nice weapon in the NFL. He has the flexibility to move all over the field, and with a team that can use him creatively, he can be a force down the seam and as a blocker on the perimeter. With a little more technical work and strength, he could quickly ascend to being one of the best value picks in the draft.