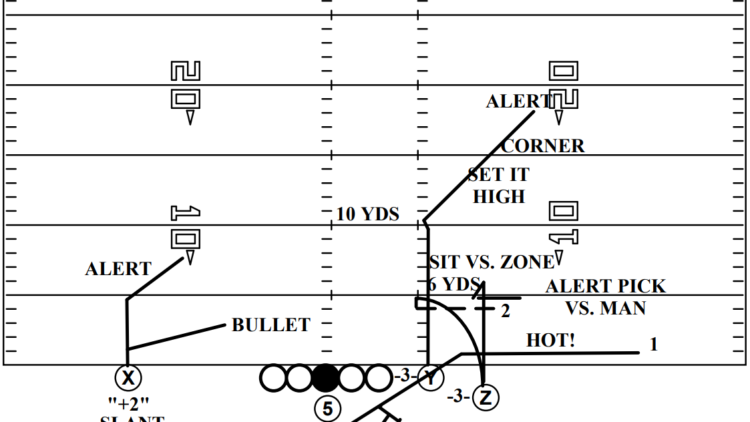 The Snag concept is popular at all levels. Out of trips formations, it creates a triangle read for the quarterback. It puts the flat defender in conflict and can work against any coverage.

The Snag concept utilizes both a vertical and horizontal stretch.

Out of trips, Snag consists of:

Teams will also run a post from the #3 receiver. Instead of stressing the corner outside in Cover 2 now, the post will force the linebacker to carry and open up space for the snag route.

Stafford first looks to the arrow and sees the corner sitting on it. He then shifts inside to the snag route which has a small bubble of space with the post forcing the linebacker to carry.

For the quarterback there are some adjustments to the read versus different coverages.

Often, Snag is such a quick hitting play, that it’s not absolutely necessary to stress vertical defenders. It’s unlikely that safeties will have time to come down to impact the throw. The conflict defender key is the same, though some may argue that the vertical route is part of what makes Snag, Snag and without it, the play turns more into a Spacing concept. The Saints are running the two-man snag concept off of a motion here.

As the flat defender in Cover 3 widens to take the motion, the #1 receiver runs their snag right where they vacated for the easy completion.

While not thrown, you can see the Lions run snag out of a bunch formation at the top of the screen and the arrow pop wide open. The snag route creates a natural rub on the flat defender and the arrow is able to get to the flats un-impeded.

The Snag concept allows teams to run a horizontal and vertical stretch on defenses out of multiple formations and provides match-up advantages. It’s effective against all coverages and allows for easy completions for the quarterback.