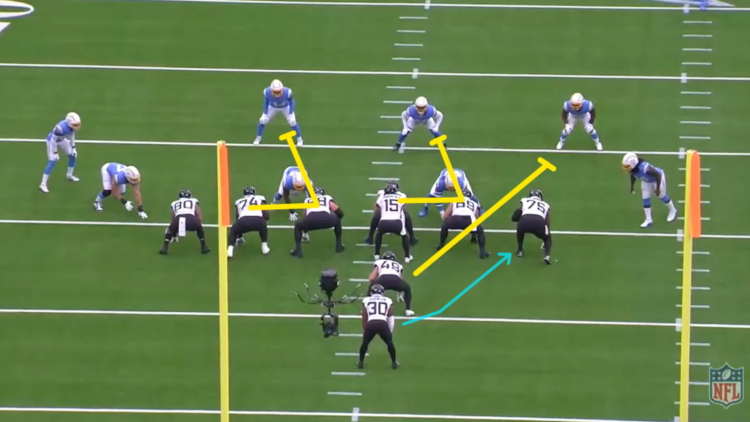 The Jaguars’ undrafted rookie James Robinson went for over 1,400 scrimmage yards in 14 games with a 4.5 yard per carry average. Despite the Jaguars’ selection of Travis Etienne in the first round, Robinson should still have a significant role in the Jacksonville offense. Robinson had some flashes of physicality and burst, but where he made his living was in the time between the snap and when the ball is in his hands. Robinson processes the flow of the defense before he even touches the ball and shaves his track to take advantage of defenders that are out of position.

Use of Initial Track to Move Defenders

Robinson’s initial track is straight on line for the bubble of space in the B-gap. Before he even touches the ball on his third step, though, he has already shaved his track to be tighter. What he’s seeing is that the linebackers have all reacted to his initial outside track and are starting to commit over the top of his double teams. Within three steps, he’s read the flow, understands that his double teams are going to make it hard for the linebackers to sift back over, and has begun to change his track to exploit that.

By Robinson’s 5th step, those linebackers are all committed to their gaps to the play-side. What that’s also done, is tempt the defensive tackles to fight for leverage to that direction so that they can shed and make a play. With everyone committed and his double teams getting onto the linebackers, Robinson squeezes off his backside double team and gets vertical for a gain of six yards.

On this inside zone look from Jacksonville, Robinson is again working off of a double team from his tackle and guard. While his initial track is right down the hash, Robinson sees space open up to the right. He also knows that the linebacker is in position to fill there and if he cuts too wide, he’s going to be in trouble. What Robinson does is give a small shift outside on his track to get the linebacker to commit outside. That allows his offensive lineman to get off the double team and ricochet onto the linebacker while also pushing the defensive tackle onto the guard. That small step from Robinson enabled that block to be set up. Robinson now has a vertical lane to exploit and gets downfield for a nine-yard pickup.

James Robinson is great at reading the first one or two steps of the defense and matching that to his own footwork. That makes him a fantastic zone runner even though he doesn’t have great measurables.

Robinson consistently had the patience and burst to exploit what he was seeing. On another inside zone play against the Browns, Robinson beats both linebackers with just his track behind the line of scrimmage. His initial vertical track off the two double teams immediately makes the linebacker commit. Even though his double team on the left is losing, by taking his track inside, that allows for the double team to the right to now wall that inside linebacker off when he cuts outside. After that initial cut, Robinson pushes slightly outside. That gets the second linebacker to move outside. His offensive lineman can now push the defensive tackle onto the center and kick out the linebacker to open up a crease down the hash.

Earlier on in the year, though, Robinson had some struggles with gap and power scheme runs. There’s less reading of the second level and more staying tight to your pullers and following the blocking scheme. Early on against the Chargers, Robinson gets tempted by all the green grass in the middle of the field. The problem is, none of his linemen are expecting him to cut that direction and are down-blocking defenders into that area. Robinson cuts to space, but if he had stayed on his track behind his two guards, there’s a huge lane and wall being created outside the down-block by the tight end.

Four weeks later, when the Jaguars ran the same counter play against the Browns and a similar space opened up inside, James Robinson was more disciplined on his track and followed his linemen up and through the gap outside.

Running out of Shotgun

As a zone runner, he’s great. As he learns and grows in some more gap scheme runs, he’ll only get more effective. Of note as well, is his yards per attempt jumping from 3.6 under center to 6.5 when running out of shotgun. With Urban Meyer coming in and bringing a more spread-style offense, Robinson could see a similarly if not more productive year two.

Read More: Urban Meyer is a Jacksonville Jaguar – What to Expect on Offense

Where he does really need some polish is in pass protection. He was very weak meeting guys at the line of scrimmage and routinely sat in the backfield and caught linebackers and defensive tackles instead of greeting them. That forced him into the lap of the quarterback and impacted a lot of throws throughout the year. With a legitimate off season and some strength building, that could help, but it has to be fixed if he wants to be an every-down back.

James Robinson wins with vision and patience. He’s a master at setting up blocks and is incredibly tough to stop from getting consistent chunks in the run game. He might not scare you with home runs, but he’ll wear you down, force linebackers to be patient, and grind out yards.