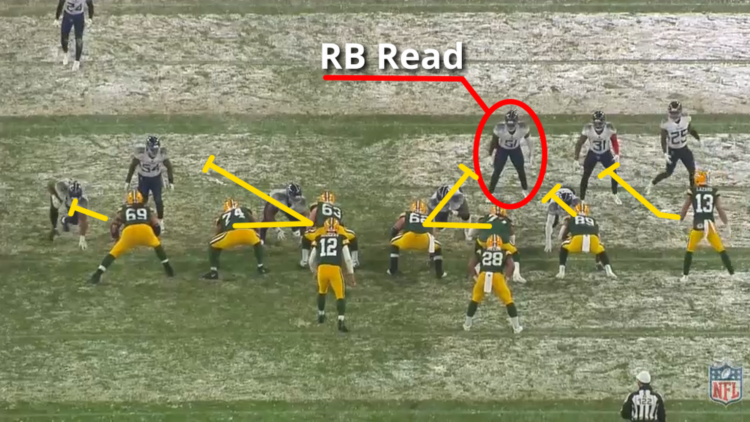 While the duo concept has been around for a while, it has recently started to become more popular. It’s great for displacing defensive linemen and creating vertical push. Duo places an emphasis on double teams and creating a linebacker read for the running back.

All blocking schemes have slight variations from team-to-team and can often be game planned differently from week-to-week. At its core, though, duo is all about the double teams. Duo is always run with a tight end and to the tight end side. The tight end is an integral part of the scheme, but you don’t need a mauler in the run game there. A stalemate is a win.

Duo can be thought of as “doubling up” because linemen are double teaming directly to the linebacker in front of them. Instead of like power schemes where the double team works to the backside linebacker, this play is all about putting the play-side linebacker in conflict. That linebacker may end up blocked, but the scheme does not emphasize coming off to block that player with urgency. Instead, the running back is responsible for making the linebacker’s decision incorrect and removing them from the play.

It is critical that the offensive line understand their priority gap is the backside gap. If any stunt or blitz fills that gap unexpectedly, it is their responsibility to abandon the double team and protect that gap.

There is going to be an unblocked player for the running back in duo. Ideally, it’s a corner or nickel linebacker that’s coming in to get involved in the run game with the tight end in-line.

This Duo call from the Packers has each player checking their backside gap. If nobody is present, they work the double team play-side.

Elgton Jenkins at left guard does a great job of knowing his priority gap and quickly coming off his double team to pick up the blitz from the Will linebacker. The right guard and right tackle double team up to the linebacker directly in front of them and the tight end washes down the end man on the line of scrimmage.

The running back, AJ Dillon, is reading the play-side linebacker. As soon as that linebacker fits to the left of the double team, Dillon knows the ball is going outside.

The receiver in the tight split comes down on the safety and that leaves the running back one-on-one with a corner outside.

The Ravens here are running Duo with a tight bunch formation which helps to bring smaller bodies into the box and allows for receivers to get a piece of nickel linebackers coming in on the play. Again, the Ravens protect their priority gaps with the running back reading the last linebacker inside the box to the play-side.

As soon as the linebacker fills, the running back knows the ball is bouncing outside. The receivers in the tight bunch pick up the nickel linebacker down in the box and that forces the corner to come and make the play.

With the Cowboys, we get a cutback read off of duo. The same rules are all in effect here, but now the play-side linebacker plugs and the Rams hold outside contain. Zeke Elliot has the option here of either bouncing outside or cutting it back towards the backside linebacker. Zeke doesn’t see anything outside, so he works off of the double team between the guard and center who have created movement up to the second level.

The center comes off at the last second to get the linebacker and Zeke stays tight to the block to pick up a nice gain.

Duo is a great change of pace play that displaces defensive linemen and allows the running back to read the second level. It can create cutback lanes, establish a physical presence, and offers big play potential with one broken tackle.