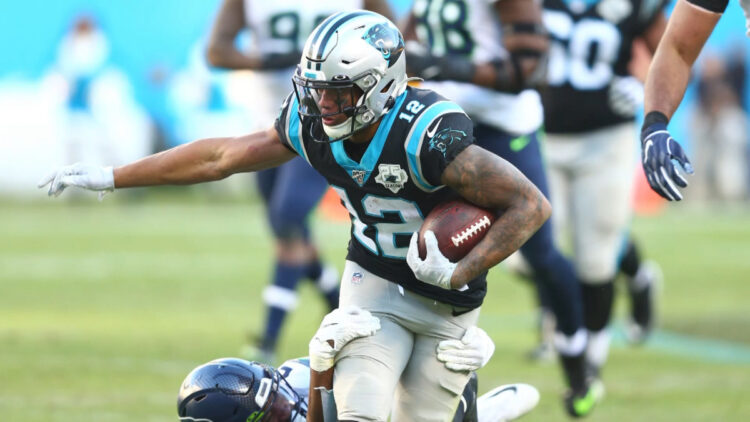 All DJ Moore has done with the Panthers is produce and find ways to get open. He went over 1,000 yards in both 2019 and 2020. In 2020, he averaged over 75 yards a game, 5.8 yards after the catch, and has developed as a route runner. He uses tempo in his routes and is one of the most complete receivers in the game.

DJ Moore is an expert at using his head and his eyes to win routes. A big issue that a lot of receivers have is that they turn their heads too early before their breaks. That allows defenders to key on that to jump the route. With Moore, his head is the last thing to turn. This rep against the Buccaneers’ Carlton Davis is a great example of that. Moore is running a 15-yard sail route and is isolated against Davis.

Note first where he is aligned at the snap of the ball. He’s at the bottom of the numbers. That alignment makes his route more difficult to throw because there’s less field to work with. Moore knows this, and works his route stem to the inside so that he’s finishing at the top of the numbers. That gives him two extra yards to work with. Numbers begin 12 yards from the sideline and are two yards in height. As a result, Moore has gone from working with 12 yards to the sideline to 14.

The next step in this route is the break he uses to get to the sail. Moore is using a corner break at the top of his route. What that means, is that he is taking the initial track of running a corner route to get the defender to turn his hips. Secondarily, it also makes it easier to hard cut to his sail which needs to be flat and at a quarterback friendly angle. He gives a hard jab inside and only turns his head about 45 degrees. Everything in his body language says he’s running a corner.

The last step in the route is the final break downhill to the sail route. His head snaps flat to look for the ball only after he’s planted to get into his break. The defender now has his momentum going backwards because he was reading a corner route, and Moore creates separation on the sideline for the catch.

The use of his head and eyes can be particularly lethal on double moves. Against Washington, Moore again uses the same corner break. This time, though, he’s working a double move off it and running a corner post. He pulls his head and eyes, turns his shoulders and hips to the corner, and as soon as the defensive back turns his hips to cover that, he breaks to the post.

If DJ Moore gets you isolated away from a safety, he has the speed to threaten you deep and the route discipline to make players buy whatever he’s selling. Moore quickly closes space here to get onto the corners’ toes. He gives a violent full head and shoulder fake inside to stop their feet while maintaining his stride. That small move helps him to win over the top on the fade.

Moore uses that head nod to forces defender to play incredibly disciplined in off coverage. He’s laying the traps and using his body language and eyes as bait to pull defenders up, make them stop their feet, or allow him to gain leverage.

Moore also does a great job of using his hands within the route. He wants to eliminate any way for the defender to be able to slow him down. Corners know that he can burn them with head and shoulder fakes when they play off, so a lot of corners will test the waters and play him tight to the line of scrimmage. As soon as he feels hands on him, he works to remove them and makes a great adjustment to attack the ball in the air.

DJ Moore has 4.42 speed, so if you aren’t successful in getting your hands on him and slowing him down at the line of scrimmage, you’re going to have trouble in a foot race. Moore knows this as well as anyone and is very disciplined in using his hands off the line of scrimmage to win those releases and get deep as quickly as possible.

If defenders do contact him in the route, he uses great technique at the top to create separation. DJ Moore and the Panthers are running Y-Cross here and Moore is running the dig behind the cross. If Chicago gets underneath the #3 receiver, there will be space in the middle of the field to hit Moore on his dig route. The Bears run one of their favorite Cover 1 Robber looks where they drop Eddie Jackson down to rob crossing routes in the middle of the field. Everyone else has man coverage with one deep safety. That means Moore has to win inside leverage and beat his man for the concept to work.

The defender gets hands on Moore in the route, but Moore now uses that contact and leans back into the defender. That helps him then use the defender as a platform to push off of and get him going in the right direction while pushing the defensive back the other way.

Moore also does a good job of dictating the tempo on his routes against defenders that are walked up on him. Off the line, if he reads that they’re playing passive and waiting for him to make a move, he’ll be the aggressor. Here, off the line, Moore reads that the corner is squatting and waiting so he attacks him with a bench release to immediately get separation and dictate the tempo of the route.

Lastly, DJ Moore is an animal with the ball in his hands. He’s incredibly physical and refuses to just go out of bounds. He’s rarely brought down by one player and continually churns his legs and fights for extra yards.

The Panthers’ DJ Moore is quickly ascending to being in the conversation for one of the best receivers in the league. Only one receiver has eclipsed 1,200 scrimmage yards in the last two years and DJ Moore is that guy. Joe Brady has put him in great spots to work underneath and has set up double moves for him on the outside to use his speed. The Panthers are quickly turning into contenders and with DJ Moore on the field, they can score at any time.