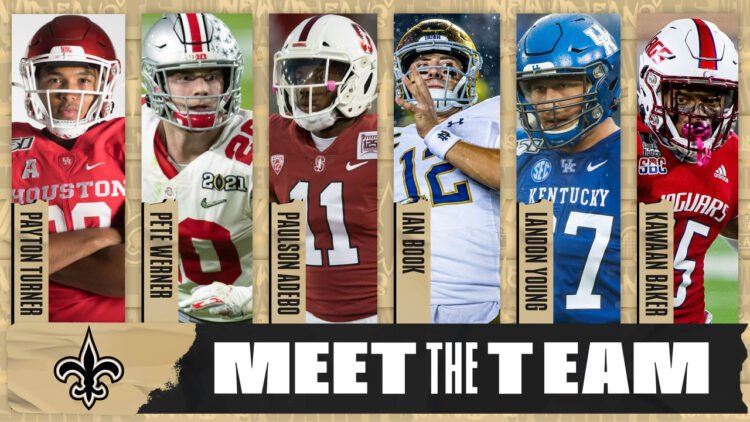 The Saints entered the 2021 NFL Draft with eight picks to upgrade the glaring holes on their roster, mainly at corner and linebacker. The quarterback position was listed as a need as well, but the team is likely to use a combination of Jameis Winston and Taysom Hill in 2021. This draft was important for New Orleans because they needed to select instant impact players, due to their salary cap limitations. After a few trades, the Saints made six selections in the draft, with a few of their picks confusing some experts. Mel Kiper Jr. graded New Orleans’ draft as a C+, but it may be better than advertised. With the draft coming to a close, let’s analyze some of the Saints’ picks and discuss their potential impact as rookies, and for years to come.

The Saints were hoping to trade up into the top 10 to secure a blue-chip cornerback. This was an impossible move for the team to make as it would have cost them three first-round picks and a second-rounder. Instead, they decided to select Payton Turner, a defensive end from Houston. This was a confusing pick because there were valuable corners still on the board. Turner was also selected before some of the highest-rated edge rushers in the class. This pick was a reach and is similar to the Marcus Davenport draft pick in that his potential may have been overvalued. With Trey Hendrickson leaving in free agency and Davenport’s injury history, it did make sense to add depth at this position to try to replicate the production. Turner has a ton of upside with great length and size but is a developmental prospect.

Read More: 2021 NFL Draft: Biggest Reach of the 1st Round

The Saints opted to take Pete Werner in the second, adding depth to a position depleted by injuries in 2020. When you watch Werner’s tape you see that he is a “jack of all trades” linebacker. He does not excel in a specific aspect of the game but has the potential to be above average in all areas. Werner has the versatility to cover tight ends in man, effectively cover in zone, and attack gaps to fill in the run. He is a highly intelligent player, with awareness and play recognition being his best qualities. Werner was one of the most consistent linebackers in his three years at Ohio State and proved he belongs. He will have an opportunity to play early with the departures of Alex Anzalone and Kwon Alexander this past offseason.

This is the best value pick for the Saints as they packaged their two third-round picks to move higher in the third for Paulson Adebo. Adebo was a steal for the Saints, he was a standout at Stanford and earned first-team All Pac-12 honors twice during his tenure. He initially declared for the draft last year and ranked as the number two corner prospect, only behind Jeff Okudah, but Adebo decided to return to school and ultimately opted out of the 2020 season due to Covid-19. He has great size at 6’1, 200 pounds, and is a ball hawk on the field. In 2019, he led the Pac-12 in interceptions per game as well as passes defended per game. Adebo can make an immediate impact across from Marshon Lattimore giving them two corners who can excel in press coverage.

Read More: 2021 NFL Draft: Biggest Steal of the 1st Round

The writing was on the wall for the Ian Book selection after Sean Payton said he reminds him of himself during a pre-draft interview. He discussed how scrappy he was and how interesting it was to watch his tape. A few weeks later they selected Book in the fourth round. This was an intriguing pick because they may still be searching for their quarterback of the future. I believe Book was selected to compete against Trevor Siemian as the true backup to Jameis Winston in case of injury. This would allow Taysom Hill to continue to produce in his utility role, which makes the offense much more dynamic.

The Saints traded a sixth and seventh-round pick to move up for tackle Landon Young from Kentucky. This was a great late-round selection as he gives the offensive line versatility and much-needed depth after losing three linemen in free agency. He has the potential to be the successor to Terron Armstead, who is almost 30 and has dealt with lingering injuries. New Orleans’ last pick in the 7th round was receiver Kawaan Baker from South Alabama. When you watch the film Baker plays above his competition, but potentially got drafted because of his pro day. He ran a 4.41 in the 40 and caught every ball during the workout. He plays primarily in the slot which allows Tre’Quan Smith to play in a more comfortable role on the outside. Baker has an opportunity to make an immediate impact in a young receiver room.

The Saints did not have many “sexy” picks, but I believe they received good value. It may not mirror the production of some of their previous draft classes, but these players can become major contributors to the team for years to come. New Orleans must add additional depth in the remaining free-agent market to stay at the top of the division. The rest of the NFC South is getting better where the Saints seem to be getting worse.