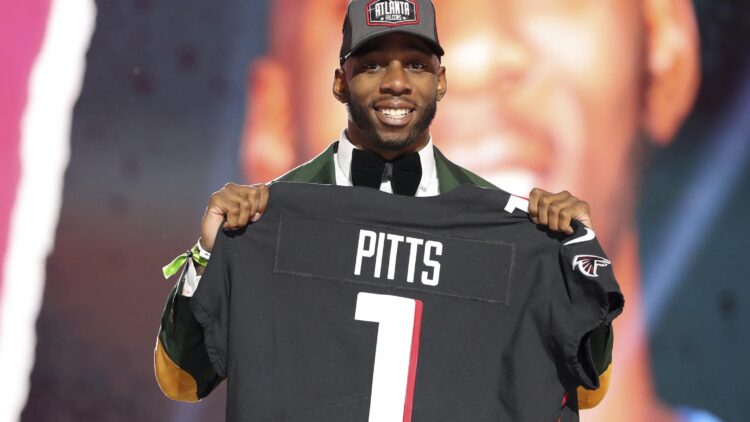 After three consecutive losing seasons, the Atlanta Falcons made a decision to restructure their front office. Their 4-12 season led them to hire Terry Fontenot as the general manager and Arthur Smith as the head coach to lead the franchise into a new era. They entered the NFL Draft with a plethora of holes. Their most glaring needs were on the defense. Acquiring top value in this year’s draft was crucial for the new leadership in order to push the franchise forward. They accomplished just that by drafting a potential franchise talent while satisfying their most pressing needs. Mel Kiper Jr. graded the Falcons as a B-, but this draft breakdown sheds light on some hidden value. 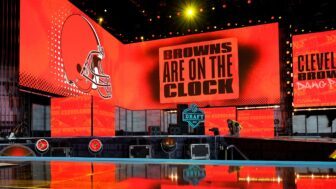 Kyle Pitts is one of the best non-quarterback prospects in any NFL draft to date. His draft stock rose after drawing comparisons to Calvin Johnson because of his athleticism and height at 6’6″. Pitts’ stock rose even higher after clocking in a 4.44 40 yard dash. He is a mismatch for any defender and his catch radius makes him a monster red zone threat. Experts believed he was the best pass catcher in a draft that had Heisman winner DeVonta Smith in it. Atlanta believed this to be true as well, drafting Pitts ahead of Ja’Marr Chase and DeVonta Smith. Some believed Atlanta should draft Justin Fields, but moving on from Matt Ryan would cause them to take a $40 million hit in dead money in 2022. The possibility of a Julio Jones trade also increases the need for a dynamic pass-catcher that Atlanta can pair with Calvin Ridley. 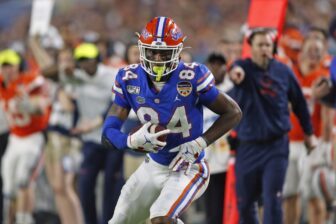 While Kyle Pitts is a freak of nature, Richie Grant may be their most significant pick of the draft. This was their most pressing need after three of their starting safeties departed this offseason. Grant excels as a deep safety and has a knack for finding the ball as he had 10 interceptions in college. Even after trading back in this round, Atlanta had the option to select Trevon Moehrig, the 2020 Jim Thorpe Award winner. Instead, they went with Grant because he adds versatility to the defense by being able to play in the box. They also added two safeties in Erik Harris and Duron Harmon in the offseason which lessened the need for a sole deep safety.

Offensive line has been a pain point for Atlanta, but was a smaller need entering this year’s draft. They drafted two first round linemen in 2019, but it did not change much as PFF ranked the offensive line at 21st in the league. They selected Jalen Mayfield in the third who played left and right tackle at Michigan. The Falcons get a player who has versatility to play either tackle or guard on both sides. This selection can fit seamlessly for Atlanta with Mayfield competing for a guard position after their starting left guard, James Carpenter was released.

Athleticism and Versatility were key traits that Atlanta focused on in the later rounds of the draft. They used one of their fourth round picks to continue stacking the offensive line with Drew Dalman. Dalman is an explosive run blocker with versatility to play center and both guard spots. While he will have opportunities to compete for a guard position, center is more likely for him since Alex Mack was not re-signed this offseason. At the least, Dalman gives Atlanta depth at multiple positions.

With the other fourth round pick, the Falcons acquired a corner in Darren Hall. Hall was exceptional in off-man coverage at SDSU. He had a FBS leading 16 pass breakups which helped him earn First Team All Mountain West in 2020. Corner was not a big need for Atlanta in the draft, but there is no true starter opposite of A.J. Terrell. After losing Darqueze Dennard this offseason, they signed Fabian Moreau to add competition to the room. Moreau will make an impact, but he has yet to prove he can be the long term starter. Hall will compete for reps in dime packages that require more defensive backs. He adds depth at two positions as well playing corner and safety.

The Falcons used three of their remaining picks to add depth on defense and used their last pick on a receiver. Atlanta had great value on their selections, but they still may have to address their edge rush in free agency. They used a fifth round pick on an edge rusher in Adetokunbo Ogundeji, but he will need to develop before he can make an impact. Overall, Atlanta had a great draft that satisfied their most important needs and may have acquired hidden value in some later rounds. The organization has taken steps to stay competitive in what seems like a race for second place in the NFC South.