Marquez Valdes-Scantling (MVS) has had an up and down three years with the Packers. He has steadily gotten better, but still struggles to catch the ball cleanly and had seven drops in 2020. However, he’s one of the best deep threats in the league. He averaged 20.9 yards per reception and came up big in some of Green Bay’s most critical moments. He has elite speed for his size and runs a 4.37 40 at 6’4” and 206 pounds. What’s exciting is that while he might not be a complete receiver and has some change of direction issues, he is using really good route technique and has started to be able to get himself open outside of scheme. 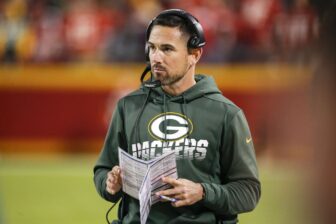 Also Read:
Matt LaFleur is Scheming Things Up for the Packers Offense with the Mesh Concept

MVS’ speed is real. He can easily run by guys if they’re playing him close to the line of scrimmage. He might have only averaged two receptions per game in 2020, but he made the most of those receptions. If you match up a linebacker on him because of what Matt LaFleur and the Packers do formationally, it’s a done deal.

Even if defenders play off, he eats up so much ground with his long strides that he quickly gets up onto the toes of defenders that are ten yards off the line of scrimmage.

That speed then allows him to get into other parts of his route tree. He’s not terrific in change of direction routes like digs and slants, but with the threat of his speed, he can create space for himself in spite of that. Here, Marquez Valdes-Scantling attacks the Cover 3 defender vertically and forces them to turn their hips because he’s eaten up so much space. Despite not being quick out of his break, he still creates separation on his dig over the middle.

Marquez Valdes-Scantling can be a little inconsistent with his hand usage in routes, but when he nails it, he nails it. He’s become very good at working defenders away from his route-side space, using his hands to get back inside, and then leaning on them to separate at the top of his route.

That subtle lean back into the defender can make a world of difference for his ability to create separation.

Here, against the Lions’ man coverage, he uses that technique. MVS keeps defenders at arm’s length so that there’s always space between them while they’re both engaged and hand fighting. That means that when he pushes off, there’s already space. What refs look for in offensive pass interference is a full extension of the arm. If you’re never in tight with a defender, you don’t have the arm coming from a closed to open position. That also helps MVS because he has such a long frame. Most of the time, he can out-reach defenders and keep them at a distance. As Valdes-Scantling breaks for his route, he leans back into the defender for one step. That gives him a more solid surface to push off of. He then breaks back the other way with a subtle extension to create separation. 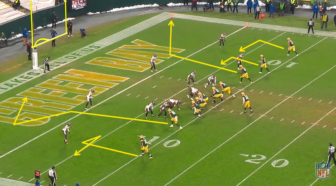 Also Read:
Anatomy of a Play: The Packers 3rd and Goal vs. the Bucs

While getting open is important, so is catching the ball. Way too many times, MVS dropped the ball with nobody around him. Sometimes, these weren’t small drops. Since he’s gotten better at getting open, he’s had some huge opportunities that he isn’t able to finish on.

Putting it All Together

You can see a little bit of what encapsulates MVS in this play. Speed, some good route running ability, but an inability to finish the play. Marquez Valdes-Scantling is able to immediately threaten the corner playing the deep quarter over him and forces them to bail. What MVS does a great job of here is stemming his route to the outside and entering the defender’s blind spot. The blind spot is the area that’s about 2-3 yards from a defensive back that’s turned inside in zone coverage. It causes the defender to lose sight of the receiver since their back is turned to them. That allows for MVS to break without the defensive back seeing his stem and angle. That creates a ton of separation for MVS to the middle of the field. Not only did he turn the defender around, but by stemming outside, he created more space for himself inside. The ball ends up being underthrown and makes the catch a little tougher than you’d like, but MVS did all that work and instead of attacking the ball in the air, he let it get into his body which forced the catch to be contested and resulted in an incompletion.

When he has clean releases and completes the catch though, he is fun to watch. He understands how to push on to the toes of the defender and gives them as little time to react to his cut as possible.

However, when guys are walked up on him, he does have some trouble getting off jams and into his route. He does not like guys getting into his frame. He’s not going to throw corners around with his strength and he needs to keep guys at a distance to use his athletic abilities to their fullest. 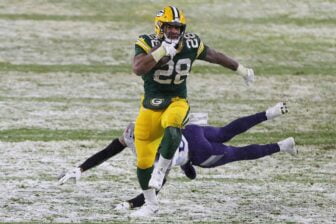 While the route tree and releases need to continue to grow along with more consistent catching, MVS is a more than willing blocker and often the Packers would use him as a point man on blocking for RPOs.

There are some definite positive steps that MVS has taken, but it’s also year four and a contract year. If he just catches all the balls that are within his frame, that’s a huge win and would contribute to big, momentum-shifting plays in games. He may never be able to route guys up underneath and he lacks suddenness in his breaks, but he can be a very effective and impactful player. If he continues to polish and grow his route tree like he did in 2020, even more big plays are coming for MVS.