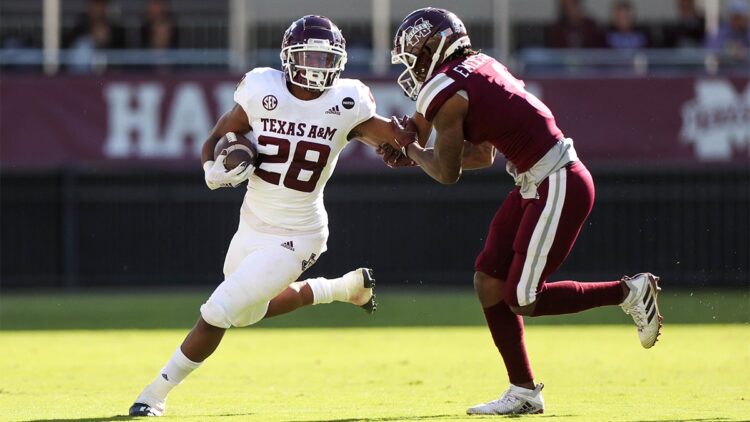 Running backs being slected in the first-round are becoming more and more rare, but we did just see two selected in 2021. While this class might not have a household name from a big program like Najee Harris or Travis Etienne, there are still some very productive players. I would say the top two are solidly entrenched at this point, but after that it’s a crapshoot. Without further ado, here’s my top ten preseason prospects for the 2022 NFL Draft:

The best returning offensive player in the SEC is none other than Texas A&M’s Isaiah Spiller. He’s an angry runner who has looked great in his first two years at College Station. He has helped close games out for the Aggies with his ability to break tackles in the fourth quarter. Now that Kellen Mond has graduated, the Texas A&M offensive should feature a steady dose of Spiller. While he doesn’t have great breakaway speed, he has great short area accleration. Couple that with his physical style of running and he is a special talent at running back. Most of his receptions came off of check-downs, but he showed steady hands and was good enough in pass protection. Another advantage he has is his age. He won’t turn 20 until this August, meaning he’ll turn 21 right before his rookie year. In terms of potential, he’s just scratching the surface and very well could become an elite running back in the NFL.

Najee Harris got a lot of attention in 2020, but it was Breece Hall who led the nation in rushing. Hall is very similar to Spiller in the sense they aren’t the fastest running backs, but are fast enough to burst through an open hole. Hall relies more on his vision than anything else to gain yards. He’ll follow his blockers and be patient before making one cut up-field. Players like Hall tend to age very well as they don’t have to rely on their athleticism for success. Hall also showed enough receiving ability to not make him a liability in that regard. On what should be a very good Iowa State team, Hall should pick up some Heisman attention and I think is a sound bet to finish in the top three this upcoming year.

If there’s any running back outside of the top two that could be a first-round pick, it’ll be Kyren Williams. Williams broke out for the Irish in a big way in 2020 by running for over 1,200 yards. He runs tough for a guy that’s under 200 pounds, but his speed is his trademark. When he hits the open field, he’s tough to catch. The Notre Dame offensive line was one of the best in the nation and did an excellent job of creating lanes that even an eighteen-wheeler could fit through. If Williams can replicate this success with a batch of new starting offensive linemen, we’ll know it’s the player and not the system. Williams was also third on the team in receptions, showing that he has some versatility in his game.

Many expected White to breakout and be the next great Georgia running back, but he never quite got there in 2020. He by no means had a bad season, he just didn’t take his game to the next level. Over his first two years, he’s averaged over five yards per carry and has repeatedly shown that he deserves to be a workhorse back. With some added muscle, he can become an even better runner inbetween the tackles. We need to see more from him in the passing game in order for him to be considered a high-end NFL prospect. He was the third leading receiver amongst running backs on his own team in 2020.

Sometimes when you see a player in college, you feel like they’ve been there for a decade. Verdell is one of those guys for me as he’s been busting long runs for the Oregon offense for three years now. He’s a speedster, but is thickly built to be able to take some physical punishment. I don’t think he’ll be a guy who’ll run over a bunch of guys consistently, but he’s going to be best used in outside zone. Allowing him to get to the outside and use his speed will fit his skillset. He’s shown enough as a receiver to make me believe he can produce in that aspect of the game. I’m not sure he’ll ever be a full-time starter, but he could have some big games as part of a rotation.

Ealy is the best athlete of the bunch. He was a highly-regarded prep baseball player and was drafted in the 31st round of the 2019 MLB draft by the Arizona Diamondbacks. He played in the pandemic-shortened season on the Ole Miss baseball team in 2020, but had shoulder surgery and missed the Spring season. I’m assuming he’ll continue on the football route, but I wanted to point out that Ealy has some options. On the gridiron, he’s legit as well. He might not get the volume stats because of the offense that Ole Miss runs, but he’s a complete back. One moment he will be split out wide as a receiver and the next he will run over a linebacker on a halfback dive. I love his patience and vision as a runner and he can break a long run with his speed.

While Trey Sermon turned into the second coming of Jim Brown down the stretch for Ohio State, it was Teague who was the main back at the beginning of their season. After a ridiculously quick return from an achilles injury, Teague looked like the bruising back we saw in 2019. However, he didn’t add any quickness which was already the weakness in his game. If you want a power runner, then you’ll need a guy like Teague. However, without much speed or upside as a receiver, he might be limited to a short-yardage option.

The Covid shortened 2020 season limited Borghi to just one game, but if you’re in the market for a receiving back then he’s probably your top option. With 89 receptions in his first two seasons, he plays more like a receiver than running back. Listed at 195 pounds, Borghi relies on his speed and shiftiness to beat bigger defenders. He’ll never be a workhorse or RB1, but he could be a guy who plays for a decade. Think about the receiving running backs the Patriots have had over the years (White, Burkhead, Faulk) and apply that same style of play with Borghi.

I expect one of the two Oklahoma running backs, Kennedy Brooks or Eric Gray, to have a huge season. Personally, I like Brooks more and despite him not playing in 2020, I think he can be a good pro. Brooks is a downhill runner who wants to run you over every time he touches the ball. What he lacks in speed and vision, he makes up for in grit and physicality. While not utilized as a receiver much, he has shown nice hands and does a decent enough job in pass protection to carve out a role for himself in the NFL.

20 years ago, Ibrahim would have been a guy that was seen as a future NFL star. However, due to athletic limitations and not much versatility, expect him to be a rotational running back and special teams ace. He’s another physical runner who is at his best when he’s running downhill and gaining 4-5 yards a carry up the middle. There’s absolutely a role for a short-yardage guy who could add value on special teams, so expect to see him playing on Sundays soon.