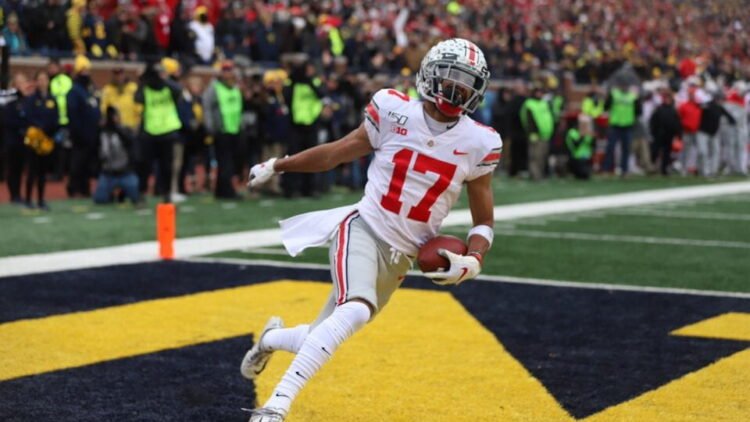 We’ve seen some of the deepest wide receiver groups ever in the last two drafts. While 2022 might not have that top-end talent, it is once again great in value. Many of these prospects still have plenty of question marks. I grouped in tight ends because so much of their job comes on the receiving end. At this moment, there aren’t too many getting hyped up as top prospects. So, I present to you the top pass catchers in the 2022 draft, preseason edition:

It came as a surprise to just about everyone that Olave decided to come back for his senior year when he was getting serious first-round buzz after a great 2020 season. However, he can take that next step in his game with another big season similar to the way Devonta Smith did this past season. Olave won’t wow you athletically, but he is fundamentally sound and is an elite route-runner. I’m not quite sure he’ll ever become a dominant WR1 on an NFL team, but he should have a long career. Think Robert Woods with a more developed game and ready to produce right away.

Whoever the quarterback for Ohio State will be this year is going to be in a perfect scenario. Olave is the veteran and steady option while Wilson is the exciting athlete with great speed. Wilson exploded in his first four games in 2020, catching 31 passes for 513 yards. He did slow down the last few games, but showed enough to the point where there’s a lot of excitement for him in 2021. While I’m obviously a huge fan of Olave, I wouldn’t be shocked if some view Wilson in higher regard. As I mentioned earlier, he has great speed and overall athleticism that shows up on film. He is far from a finished product and if he lands in the right scenario, he could become something special.

Stuck behind some incredible receivers as a freshman, Metchie began to break out as a sophomore in 2020 and should be the top option for the Crimson Tide this upcoming year. After Jaylen Waddle went out with an injury, Metchie became the deep threat out wide, using his speed and route running to blow past defenders. He’s not as fast as Waddle (not many are), but he has great wiggle and can break ankles with his footwork. This year will be a huge test for him. Now that he’s the most established option and there’s a new quarterback and offensive coordinator, he will be tested like never before. If he shows more strength in his game while putting up big numbers in the SEC, there’s a solid chance he’ll be a first-round selection.

In an era where tight ends are being asked to act more like receivers, it’s refreshing to see a guy like Wydermyer who can catch and block. He’s already developed physically at 265 pounds and has shown in his first two seasons at College Station that he can be a team’s top receiver. He’ll also bully linemen and linebackers in the running game, clearing lanes for his running backs. While he hasn’t shown too much ability in terms of yards after the catch, he’s a very good athlete at his size. I wouldn’t count on him being a consistent 1,000 yard receiver year-in and year-out, but I expect him to be one of the better all-around tight ends within his first few seasons.

Here’s a guy that’s being underrated (maybe even by me) amongst the scouting community. After two straight injury-plagued seasons from star receiver Rondale Moore, Bell stepped up and proved that he might even be better than Moore. He’s not an incredible athlete, but has good size and is solid across the board. In the NFL, he’ll be utilized more as a possession receiver who will kill defenses on third down. In the games I watched, he didn’t drop many passes and routinely made tough catches. Another big season should get him into the first round.

If Justyn Ross was 100% healthy, he’d be number one on this list. However, he suffered a scary neck injury last Spring and didn’t play in 2020. It seems like he’s on the right track to play this upcoming season, but he still hasn’t gotten full-contact clearance. When he’s healthy, he’s a playmaker with great size and skill. On a Clemson team with tons of talent, Ross was the favorite target of Trevor Lawrence. No other receiver on this list has the upside of Ross, who can develop into one of the game’s best receivers. Throw the ball up in his direction and he turns 50/50 balls into 80/20 balls. He’s truly a special talent, but there’s worry about that neck injury and his durability.

Drake London checks all the boxes. He’s athletic, a massively built receiver, and showed the production in 2020 to prove that he is starting to put it all together. In just six games, he put up over 500 yards receiving and quickly became Kedon Slovis’s favorite target. Off of the gridiron, he was a member of the USC basketball team as a freshman and was one of the best prep players in the country in 2019. As expected for his size, he’s not as quick as other receivers, but if he can build more muscle, he can be a potential game-changer.

In terms of the physical grind of a long NFL season, Burks is ready to go. At 6’5″ and 230 pounds, he looks more like a tight end than a receiver at times. I’m calling it now, he’s going to be a big-time riser up boards because of his size and athletic ability. Burks is a freak of nature for his size. He’s never had eye-popping stats, but that could be attributed to inconsistent quarterback play. He’s not going to be a guy that fits every team, but he has all of the intangibles you can’t teach which makes him an early draft pick.

If you’ve never heard of Billingsley and look him up for the first time, you’ll think I’m crazy for putting him up this high. Mark my words though, this guy is going to have a huge season in 2021. He’s an incredible athlete for a tight end. He had a 33 inch vertical in high school and is now the second-best receiving option for the Crimson Tide. He reminds me a bit of former Alabama tight end Irv Smith Jr. in size and in play. Billingsley was used a lot as a move tight end or H-back and provides a lot of versatility to an offense. He’s another guy who might not be built for every offense, but if you use him properly, then he’ll become quite a dynamic weapon.

The curious situation of George Pickens. A big-time recruit coming out of high school, Pickens has moments where he looks like a man amongst boys in the best conference in the nation. However, he just tore his ACL and his 2021 season is in doubt. He’s had some immaturity issues that include fights during the game and bone-headed unsportsmanlike conduct penalties. It can be incredibly frustrating when you could have the next Julio Jones, but can’t get that talent to consistently show up on the field. I fully expect him to not play this year and declare for the draft, making his pre-draft process as important as it can possibly be.