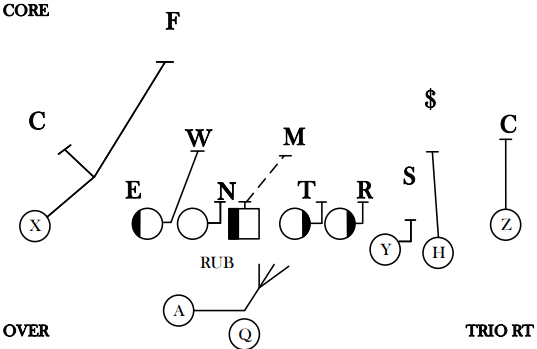 Inside zone is an incredibly popular run play that’s used at every level of football. It’s simple, creates vertical movement, and is a building block for many other zone run plays.

Zone blocking schemes create flexibility against different fronts. The offense can use the alignment and leverage of a defender against them. If they are aligned on the inside shoulder, the offense will move them further inside and it’s up to the running back to be able to read and run off of that movement. Before getting onto the second level blocks, linemen must have a reason to come off. If a double team block stays attached too long, the linebacker can fill untouched. If offensive linemen don’t coordinate who comes off, that can leave the first level defender to make the play.

Every team teaches their zone slightly differently. Most teams will have different double team calls, use a numbering system, or rely on a filled/unfilled (also called covered/uncovered) system. The blocking assignments can be relatively similar to other zone blocking schemes, but the footwork for the offensive line and running back are entirely different. Generally, offensive linemen are to attack downfield at a 45° angle instead of the more lateral step you see in outside zone. In outside zone, offensive linemen will never step backside. With inside zone, vertical steps backside are used to create double teams.

In the numbering system, the defenders are labeled with numbers starting with the first defender play-side being the “0”. The next player out is a “1”. The same is true on the backside, except using negative numbers.

In the filled/unfilled system, linemen are checking to see whether there is someone in their gap (filled) or shading over them to the side of the play. Their assignment changes based on whether a defender is present play-side or not.

For more on filled/unfilled and the numbering system, check out the outside zone breakdown here.

The backside end man on the line of scrimmage is typically left unblocked. The offense can deal with this unblocked player in multiple ways. Two ways offenses approach the unblocked player are with a split zone look with an H coming across for a kickout or a zone read where the quarterback is reading whether that defender chases down the line. If they do, the quarterback will keep the ball and run himself. If any defender slants or blitzes an offensive lineman’s play-side gap, the double team is off and the lineman must pick that player up.

The offensive lineman who is attacking vertically backside and opposite of the play call will typically be the one to come off on the linebacker at the second level.

The Chiefs are running inside zone against the Texans. All the rules that we just talked about are in place. If there is a player in the play-side gap, the offensive line will block them. If nobody is there, they will take a replacement step and go backside to help on a double team. In this case, the only player that applies to is the center. All other players have someone in their play-side gap.

The only other player with someone not in their play-side gap is the backside tackle. As stated before, he will take steps to help on a double team to the play-side in case someone spikes or fills and then will climb to the second level. Kelce, at the H-back position is coming across to kick out the end man on the line of scrimmage.

The player over the backside guard spikes to the play-side and the center is able to pick them up. The BSG is taking steps to help and then moves on to the second level defender. The running back is taking an aiming point at the play-side leg of the center and is reading dive to bounce to cutback. With movement upfront on his initial track, he can stay on line and work off of the center’s block.

This play from the Jaguars is a really good example of double teams coming off to second level defenders. Again, all the linemen who don’t have someone in their play-side gap are attacking vertically backside to create double teams. That means both the PSG and BSG are stepping opposite of the play call. They keep their eyes up and know that they are likely going to be the ones that will need to come off to get onto the second level.

This play from the Ravens shows what happens when a lineman has nobody in both their play-side or backside gap. In this case, that’s the center. When that happens, he takes steps play-side to help with a potential double team in case the PSG needs help. He then climbs up to the linebacker. Everyone else follows their zone steps and rules and the Ravens get Mark Ingram up onto the second level of the defense for a chunk gain.

Inside zone hits inside the tackles and creates movement on first level defenders. It gives freedom to the running back and allows them to read blocks. Zone blocking adds versatility and answers for every front and is an essential part of run game playbooks.