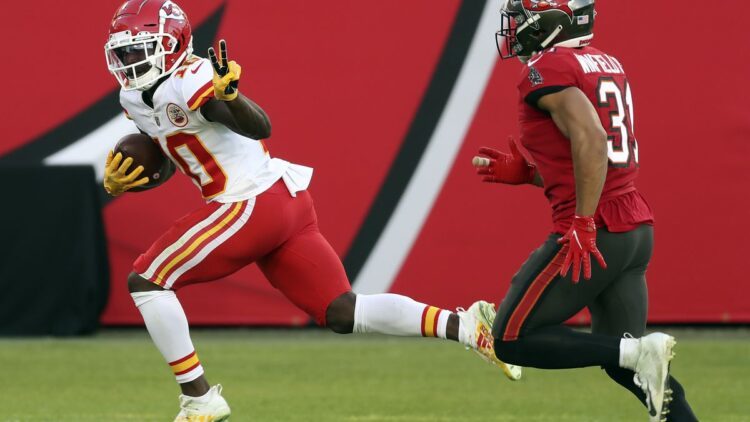 Receiver is without a doubt the deepest position in fantasy. Compared to the handful of elite running backs, there are upwards of 15 or 20 legit wideouts in any given season. While many will invest heavily into running backs in the early rounds, do not shy away from the idea of drafting two or three star receivers early, especially in a points per reception league. Build out your receiving core with as many of these players as you can and you might just win a championship. All of these rankings will be based on ESPN’s PPR (Points per Reception) scoring format

Davante Adams wasn’t just the best receiver in fantasy football by a wide margin, he was the 2nd best skill player period. He was tied for 2nd in receptions, was 6th in receiving yards, and was 1st in touchdowns. He averaged more fantasy points per game (25.6) than any quarterback and might be the best route runner in all of football. Some may point to his tendency to get banged up with minor injuries as a red flag. Others will lose interest due to the ongoing Aaron Rodgers situation. But the fact remains, Adams was best receiver in football last year…and he missed two games.

PROJECTED ROUND: Middle of the 1st

Tyreek Hill vs Stefon Diggs is a legitimate debate, but Diggs gets the nod here. He ranked 1st in receptions, yards, and targets and is far less dependent on big plays. Hill scored nine more touchdowns and only outscored Diggs by 0.3 points for the season. As Josh Allen continues to ascend, so will Diggs. Without another star receiver on the roster to eat into his touches, there is nothing keeping Diggs from another 115 plus grabs and the possibility to produce double digit touchdowns.

Tyreek Hill is a known commodity at this point. When drafting him, you get the most dangerous downfield weapon in the league. He scored a touchdown in all but two games and his 269-yard masterpiece against Tampa Bay was arguably the best receiver performance of 2020. Unfortunately, with the highs will come some lows. Hill only broke 100 receiving yards three times and had double digit receptions twice. At the end of the day, as long as Mahomes is healthy Hill will remain in the top three of wideouts and will likely have one or two games in which he single handily wins you the week.

PROJECTED ROUND: End of 1st-Early 2nd

Despite being 2nd in both targets and receptions, Hopkins still found himself outside the top three in 2020. At 29 years old, his prime may be coming to an end, but his hands still remain elite. With the additions of Rondale Moore and AJ Green, he will likely see his targets decrease and his touchdown numbers have continued to decline since 2017. Hopkins is best viewed as a “low ceiling” WR1 who has an outstanding “floor”. In other words, he will finish as a top 4-10 player but he won’t break into the top three.

PROJECTED ROUND: End of 2nd-Early 3rd

DK is now getting recognized for his reviving ability as well as his physical stature. Having raised his yards per game up to 81 while posting a strong 15.7 yards per reception allows Metcalf to use his speed outside and strength across the middle of the field. Having roughly matched Tyler Lockett in targets, Russell Wilson may be ready to treat the 23-year-old star as his number one option. The only knock-on Metcalf has to be his hands. Catching 64% of his targets, he lags behind players like Diggs or Adams. He also dropped six passes putting him in the company of players like Mecole Hardman. Improving his hands is the only thing keeping DK from breaking into the next tier of wide receiver.

PROJECTED ROUND: Middle of 3rd

There is one question on everyone’s mind when it comes to Calvin Ridley. Can he step into the role of a WR1 now that Julio Jones is gone? Thankfully, he spent much of the 2020 season answering with a resounding “yes”. In the seven games Julio missed, Ridley averaged seven receptions and 109 yards. He also produced three touchdowns as well. Atlanta traditionally has one of the most pass heavy offenses in the league, which means Ridley could see his 143 targets increase. Do you know what more targets mean? More yards and touchdowns.

PROJECTED ROUND: End of 3rd-Early 4th

Last season was a lost year for Thomas. After having asserted himself as a top three fantasy wideout from 2018-2019, injuries derailed his 2020 season. Yet, even when healthy, assuming he will reclaim his spot as the best reviver in fantasy is not a given. The quarterback question mark in New Orleans is a legitimate cause for concern. Brees’s trademark accuracy allowed Thomas to feast on short routes and haul in receptions at a historic pace. Jameis Winston is known for many things, but efficiency is not one of them. On the other side of the coin Taysom Hill has spent the better part of four years as a “gadget guy” and is an unproven passer. Thomas is good enough to regain his top 10 status but expecting him to break the receptions record again is going to leave you disappointed.

Allen struggled to finish the end of the season while dealing with injuries and missing the final two contests of the year. Regardless, he managed a solid 17.5 fantasy points per game which was a higher mark than six of the players who finished ahead of him in total points. Most importantly, this ranking is an endorsement of the budding chemistry he has begun to develop with rising star Justin Herbert. Although 29 years old, Allen still has a few strong seasons left in the tank and Herbert’s ability will ensure Allen remains at the top of the Chargers offensive pecking order.

PROJECTED ROUND: Middle of 4th

Prior to the Julio Jones trade, AJ Brown was higher on this list. Adding a Hall of Fame talent will undoubtably eat into Brown’s usage, but Tennessee could become a much more pass heavy offense. Having ranked 23rd in passing offense this past season was always going to limit Brown, but Tannehill may feel the pressure to challenge downfield more with two stars out wide. Secondly, Brown will no longer be the victim of double teams and may be lining up against a team’s second cornerback. In summary, Brown’s volume may fluctuate, but his efficiency is poised to reach all-time highs.

PROJECTED ROUND: End of 4th

Allen Robinson has been on the cusp of fantasy greatness for years. Poor quarterback play has always held him back. Last year he broke 100 receptions, averaged 78 yards per game, and did all of this with Mitchell Trubisky and Nick Foles behind center. Robinson is a fool proof pick if only because he has proven that even the most incompetent of quarterbacks will not stop him from putting up great numbers.  Having to rely on Andy Dalton or rookie Justin Fields hurts his upside, but there is no doubt he will contend for a top ten spot when the season is finished.

PROJECTED ROUND: End of 4th-Early 5th

There are lots of strong candidates for this list that just missed the cut. Justin Jefferson exploded onto the scene last year and will look to keep his rookie momentum going. Amari Cooper still managed over 1,000 yards despite Dak being gone for most of the year, and Mike Evans will have another year’s worth of chemistry with Tom Brady. Given how quickly running backs will be coming off the board, you could forgo traditional trends and load your roster with three elite receivers. Don’t be afraid to roll out an All-Pro receiving core and ride them to a championship.