Did the 49ers just draft their franchise quarterback or make the worst decision in recent memory? Only time will tell, but the team is all in on Trey Lance. Even the picks they made later on show that.

After trading two future first-round picks to move up from 12 to 3, many Niners fans worried that Kyle Shanahan would end up picking Kirk Cousins reincarnated, Mac Jones. However, Shanahan and Lynch went with Trey Lance from North Dakota State. Standing at 6’3” 220 pounds, Lance possesses elite physical tools and the smarts necessary to be a high-caliber starting quarterback in the NFL. Even with his limited sample size as a starter, he ran pro concepts along with doing a lot of work under center. Lance is more of a power runner as opposed to a shifty Lamar Jackson or Kyler Murray type and will benefit from some designed rushes in Shanahan’s wide zone scheme as well. Unlike the other quarterbacks in this class, Lance’s rushing ability raises his floor. If he only throws the ball 15-20 times a game during his first few seasons, it will suffice. Questions about his sample size and accuracy are fair, but if anyone can get the best out of Lance, it is Shanahan. 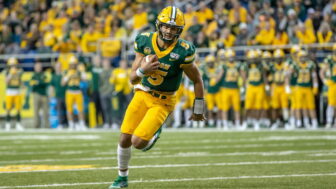 Lance will compete with Garoppolo in camp for the starting job and will probably see significant playing time this year regardless of if he wins initially or not. Shanahan and Lynch chose traits over sustained production and if these traits cash in and translate on the big stage, this will be a home run pick for a win-now team poised to make another Super Bowl run.

After trading back to the 48th pick, the Niners selected a people mover from Notre Dame, Aaron Banks. At guard, Banks is humongous and will destroy people in the run game. Banks is sticky in his run and pass sets and will be a valuable addition to a weak 49er interior offensive line. More than likely he will slot in at right guard ahead of Daniel Brunskill. Kyle Shannahan usually likes more agile offensive linemen who can get out into space for his wide zone run approach but with a downhill runner coming into play such as Trey Lance, it seems as if he will be running between the tackles more. The main concerns with Banks come from his lack of athleticism, but that makes sense from a man standing 6’5” 330 pounds. With other second-round lineman prospects off of the board, this pick made a lot of sense as the Niners were lacking depth at that position.

Banks will line up at right guard and should play right away. If he can develop more as a pass protector, he will be a mainstay on the team as the Niners work to create the optimal situation for Trey Lance

Shanahan and Lynch decided to trade up and draft a running back at the 88th pick. As a strong supporter of the “don’t spend high draft or financial capital on running backs” club, this was an interesting pick. Shanahan values a stable of running backs for his scheme and with Mostert, Wilson, and Gallman in contract years, it seems as if he wants to have running backs at the ready for the future. Trey Sermon is a power back with elite tackle-breaking ability. He runs with great vision which is important in outside zone concepts and has enough athleticism to make jaw-dropping plays.

Although the value of this pick was not the best, Sermon can have an impact on this team for years to come. It is valuable to have cost-controlled backs who possess elite physical traits such as his. Hopefully, by the end of this year, Niners fans will be able to see Sermon lined up right alongside Lance.

Going into the draft, it was evident that the Niners would need to address the cornerback room. Although San Francisco has their three starting corners in position, each comes with their own questions and concerns. With the 102nd pick, the Niners selected Ambry Thomas. Thomas has the typical size for a corner with above-average press coverage ability. He has a similar build similar to the likes of Richard Sherman, but, like Sherman, doesn’t pose any outstanding physical tools. Through 12 games in 2019 he had three interceptions. Since Thomas opted out of the 2020 season, he must not be thrown directly into the fire. He will need time to refine his skills. If things go well, he has a chance to become a starting outside corner in the years to come.

Thomas will back up Verrett and Moseley on the outside and hopefully will develop with some teaching from Richard Sherman (if he comes back). With shaky play from Moseley and the ever-present injury concern from Verrett, Thomas will likely be a contributor to the secondary in 2022, if not earlier.

The first of three fifth-round selections by the Niners was Jaylon Moore. Jaylon Moore is an offensive tackle out of Western Michigan that stands at a whopping 6’5” and 315 pounds. Moore played left tackle at Western Michigan, racking up 32 career starts and producing in the run game. He is what draft analysts call a developmental tackle due to his unrefined technique during pass blocking downs and his need to adjustment to NFL pass rushers. I would think he is likely to slot in with Niners as a backup guard and compete with the likes of Brunskill and Colton McKivitz to be the next guy up. The Niners were ravaged by injuries on the interior offense line, especially center, so when Brunskill had to be used as a starting guard/center, the depth was quite thin.

Moore will be a backup guard for this year and probably next year as well. That said, he may get a chance to slot in at either of the tackle positions if the Niners choose to not extend McGlinchey or Williams gets hurt. An athletic tackle with upside is never a bad pick in the later rounds.

The Niners were desperate for cornerback depth, especially in the slot. When K’Waun Williams was hurt last year, slot receivers were able to capitalize against the Niners. Although the Niners re-signed Williams, it was a short-term deal and he is getting up there in age. Deommodore Lenoir will hopefully be his replacement in a year or two.  Out of Oregon, Lenoir is not an exceptional athlete, but he moves smoothly around the field and has good production.

In the NFL today, the slot corner is a starting position as teams run three-receiver sets more and more. Niners could be getting a viable slot corner on a rookie deal after a year of learning from K’Waun Williams then this pick is an absolute steal. Lenoir can be impactful on special teams in the upcoming season.

With their last pick in the 5th round, the Niners selected Talanoa Hufanga. Hufanga is a chess piece that can play in and outside of the box. He is an excellent tackler that packs a punch. Although he is not an elite coverage player, his 4 interceptions during the shortened PAC-12 season show elite ball production.  As the starting safety from USC, Hufanga showed an extreme mental aptitude and played like someone who is scheme versatile.

Hufanga will be in a backup/special teams role for the first couple of years. If Jimmie Ward and Jaquiski Tartt continue to struggle with injuries, then it will be hard to see the Niners keeping them much longer. Hufanga will be immediately impactful in the run game and with some training, his pass defense will get much better.

Like stated earlier, Kyle Shanahan values having a lot of running backs with diverse skill sets. Elijah Mitchell has low 4.3 speed and home run ability. Mitchell was extremely productive for Louisiana and fits well with Kyle’s wide zone running concepts. With Tevin Coleman out of the door and Jeff Wilson Jr. being injured, Mitchell should see his fair share of snaps in the backfield especially if Mostert goes out with injury.

Raheem Mostert, Trey Sermon, and Wayne Gallman are more than likely going to be ahead of Mitchell on the running back depth chart. He will have to compete with JaMychal Hasty for snaps or be a practice team player. That said, he is the only other speed back besides Mostert on the team. Best-case scenario for Mitchell is that he fills the Matt Breida role.