The Evolution of the Ravens Rushing Attack 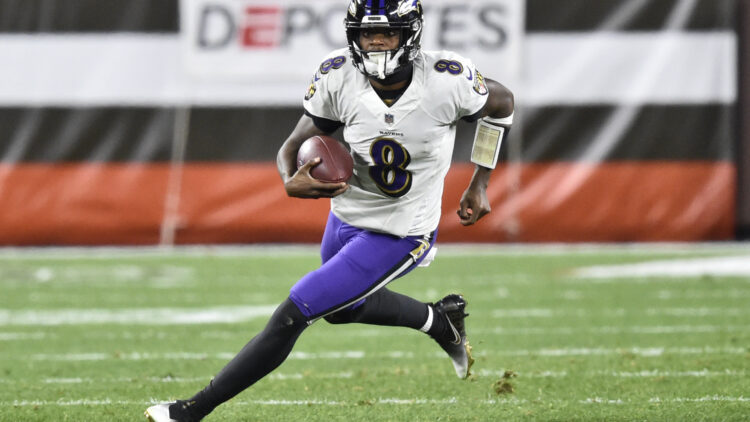 Baltimore Ravens quarterback Lamar Jackson (8) runs for a first down during the first half of an NFL football game against the Cleveland Browns, Monday, Dec. 14, 2020, in Cleveland. (AP Photo/David Richard)

Since Lamar Jackson’s arrival to Baltimore in 2018, the Ravens have led one of the greatest rushing attacks in NFL history. In the 2019-20 season, they set an all-time record in rushing yards with 3,296 and beat a record that had lasted for over 41 years. While the Ravens did not reach those totals the following season, they led the league in rushing by a substantial margin again and also broke numerous other rushing records.

The Baltimore Ravens have always been a franchise that prides itself on running the football. With guys like Ray Rice, Jamal Lewis, and Willis McGahee, the team was dedicated to getting the football into their hands. As great as those guys were, none of them could produce at the level that Lamar Jackson and the Ravens are right now. Lamar Jackson is elusive, Offensive Coordinator Greg Roman creates great schemes for him, and the defense has to account for all 11 offensive players on the field.

One of the main reasons why the Raven are able to run the football so effectively is because of the read option. Using the read option is very effective with athletic quarterbacks because it forces the defense to account for all the players on the field.

Watch in the clip above how Jackson reads the edge defender crashing on the running back. That allows him to pull the ball and run up the field for the score.

While the Ravens are not the first team to predominantly use the read option, it has become one their deadliest plays. Lamar Jackson rarely makes the wrong read and even when he does, his speed and athleticism can create something out of nothing.

Use of the Pistol Formation

One of the main differences from this offense and other zone read teams is its utilization of the pistol formation. According to Ravens Offensive Coordinator Greg Roman, he prefers to use the pistol formation to stay unpredictable against the defense. He states that unlike the shotgun, pistol allows the offense to the run the ball either direction with the running back aligned directly behind the quarterback and not offset. From the pistol, the Ravens are able to use a variety of plays such as play action, read option, and RPOs. The pistol formation also allows them to use all three of their tight ends who can block but are athletic enough to beat the defense in the passing game. Typically, the tight ends are set in motion to give the defense different looks.

Wrinkles in the Rushing Scheme

While the Ravens are not the first team to utilize option plays in the run game, it is so difficult to defend because of the new wrinkles they add to their scheme every year. For example, in Jackson’s 37-yard touchdown run vs the Dallas Cowboys, the Ravens run a QB counter. Jackson goes almost untouched while he jogs towards the endzone.

The Ravens also have started adding a lot of motions with their running backs. This would lead to jet sweeps and other option plays which made their offense even more unpredictable.

The Ravens run game is almost unstoppable due to the uniqueness of their quarterback and the creativity of their offensive coordinator. Every year they add new wrinkles to the offense to make them even more difficult to defend.