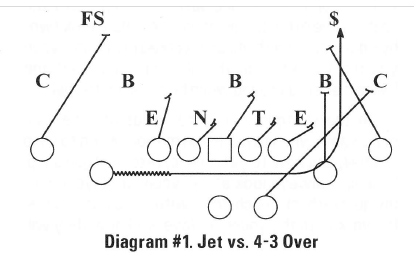 The Jet Sweep is a perimeter-attacking play that forces the defense to flow hard to pre-snap motion. It’s most often used at the high school level where the hashes allow offenses to exploit wide sides of the field with their athletes getting a running head start. However, it is also used extensively at the college and NFL levels with many teams using the Jet Sweep as window dressing to other run plays and as a change-of-pace play to hold defenses accountable when they don’t respect the motion.

Jet Sweep is the ultimate horizontal stressor for the offense. They get a player running full speed at the snap of the ball towards the sideline with the goal of beating the defense to the edge. If defenders don’t respect the pre-snap motion or players take a false step, the Jet Sweep can get the corner and break off big gains. The Jet Sweep also works misdirection in the backfield whether it’s handed off or not. Teams like the 49ers, Ravens, and Rams use the Jet Sweep to out-leverage defenses, force them to communicate, and draw their eyes away from the intended play.

The timing of the Jet Sweep is critical. The quarterback has to ensure that the receiver is going full speed at the handoff.

Receivers are also critical blockers for the Jet Sweep. Without them, the play cannot function.

Especially at lower levels, many teams will run their Jet Sweep blocking scheme the exact same as their outside zone scheme for their offensive linemen. That keeps the burden on the offensive line down and still adds a new play.

At higher levels, teams will emphasize being able to reach the defensive end to the play-side or will rely on misdirection with blocking schemes going the opposite way of the Jet Sweep. That then leaves the play-side end man on the line of scrimmage unblocked with the offense relying on speed and misdirection to get around them.

The Packers do a fantastic job blocking on the perimeter here. Allen Lazard, at the bottom of the screen, is initially blocking head up on the man over him. The way the Packers are blocking, the free safety is going to be unblocked. However, on his release, Lazard realizes that the corner has turned into his frame and shown that he’s in man coverage. With his assigned defender in man, Lazard can now feed in and pick up the safety while also moving his corner inside with him – getting a two-for-one block.

Meanwhile, the Packers here are fully committing to misdirection in their blocking scheme and are sending the offensive line and running back the opposite direction to pull defenders. That makes the block outside from Lazard and the tight end even more critical. The tight end engages with the defensive end just briefly enough to slow them down and allow for the jet sweep player to get the edge. He then climbs to get the first defender inside to wall them off and prevent pursuit. The jet player bubbles slightly around the end and the rest of the offense does a great job away from the jet to hold the rest of the defense.

The Jet sweep can be especially difficult for defenses in man coverage. The defender over the jet player has to navigate across the field and through traffic to make the play. The Rams are running the same concept as the Packers with the offensive line selling outside zone away from the jet sweep. That again leaves the tight end and receiver outside as essential parts of the play. The tight end is able to hook his man and the receiver walls off both the corner and the safety which allows the sweep to round the corner for the touchdown.

Purdue is running another version of the blocking scheme for Jet Sweep. The play-side tackle to the jet sweep now loops out and acts as the lead block for the sweep instead of the tight end. The receiver outside uses a crack block on the first defender inside and that leaves the corner for the play-side tackle to take on.

Jet sweep is part of offenses at all levels. It stresses the defense horizontally and takes advantage of defenders that don’t respect motion. Combined with misdirection, it’s a great play to get your receivers the ball going full speed and with an opportunity to get to space on the edge.